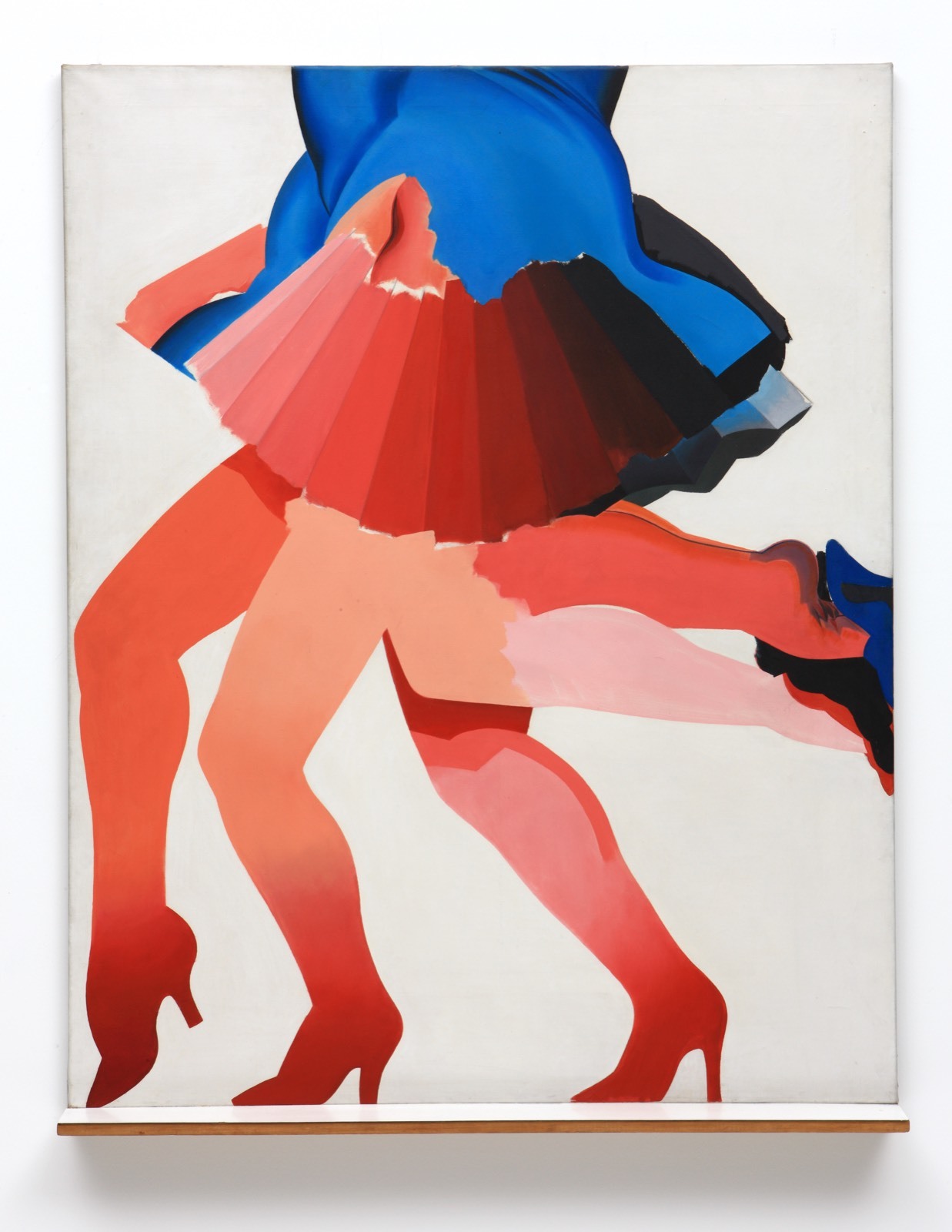 Allen Jones, Neither Forget your Legs, 1965

From the perspective of our media-saturated age it is almost impossible to imagine how radical Pop Art appeared to those who encountered it for the first time. Emerging simultaneously on both sides of the Atlantic, the movement contrasted dramatically with the staid drabness of post war austerity and presaged the arrival of a revolutionary counterculture. Making ‘high’ art from ‘low’ subject matter and employing industrial production methods, this generation of artists toppled long-standing hierarchies and heralded the first truly postmodern movement.

The exhibition POP ART: from Warhol to Panamarenko, currently on show at S.M.A.K. Ghent captures the explosive exuberance of the Pop. Featuring works from over 30 artists, this show underscores not only how far reaching the language of Pop was but also the diversity of the work produced by those affiliated with the movement. Composed of pieces on long-term loan from the extensive Matthys-Colle and S.M.A.K. collections, this exhibition is not shaped by any one particular thematic or curatorial stance yet nevertheless succeeds in highlighting several important aspects that distinguish Pop. 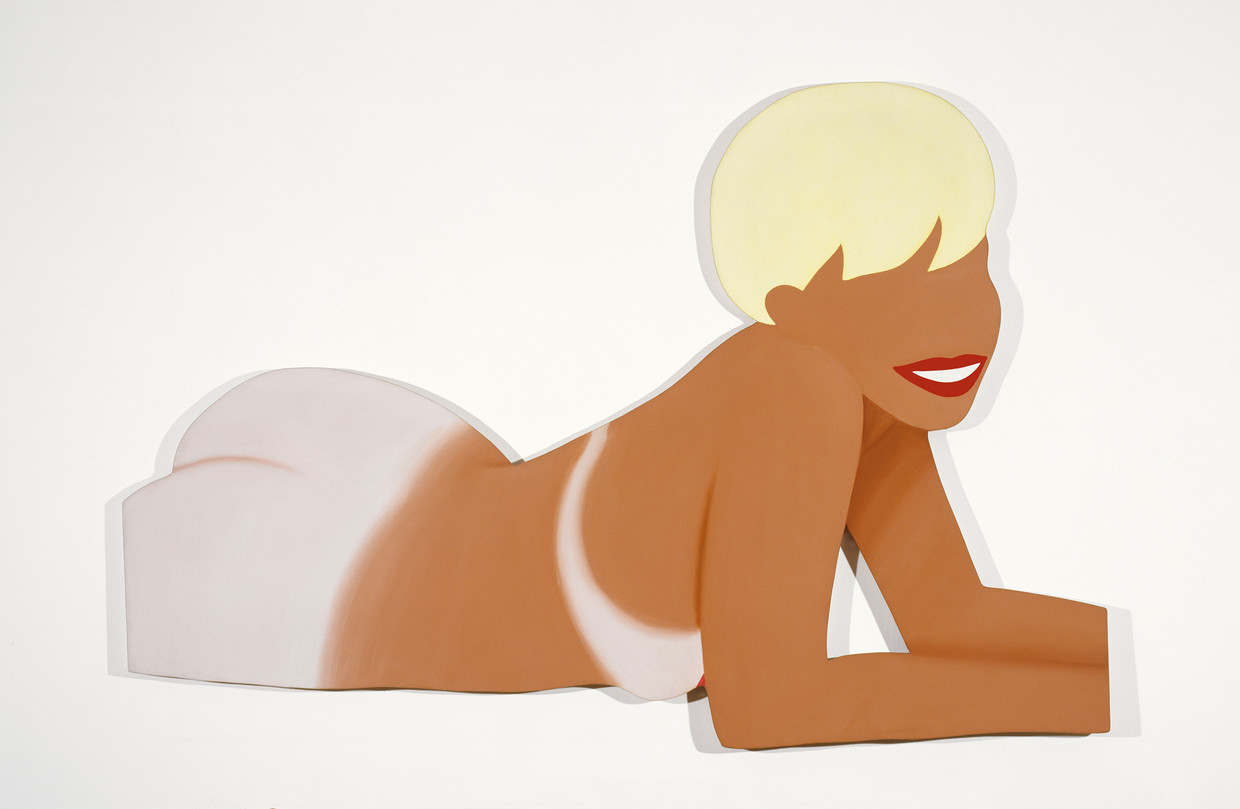 In addition to drawing from the visual language of mass-media, another notable characteristic of Pop is how it initiated a resurgence of figurative and representational art, which had been eschewed in the decades when Abstract Expressionism held sway. This tendency was identified by American artist Robert Indiana in 1963, when he proclaimed that Pop signalled “a U-turn back to representational visual communication”. This is especially evident in the S.M.A.K. exhibition, which features numerous works in which the human figure -and in particular the female form- is prominent.

Take for example ‘Neither Forget Your Legs’ by Allen Jones from 1965. Like all of Jones’ distinctive paintings, this is a visual argument between non-representational lyrical abstraction and erotically charged figuration. The pleated skirt at centre of the composition is essentially a colour study; a chromatic scale that descends in gradients of hue from baby pink to deep burgundy. Jones embraced mass-produced material from magazines and mail order catalogues because it offered new possibilities for figurative representation that went beyond the constraints of academic fine art. The resulting vocabulary is visually seductive and poses questions regarding the relationship between art and commodity fetishism. This predilection for repurposing commercial media was part of the wider socio-political trend of interrogating the new breed of capitalism that flourished in the post war years. In art historical terms, the elevation of  kitsch or ubiquitous material was an affront to Greenbergian formalism, which prioritised the ideals of transcendence and purity.

Also featured in this exhibition are two of the ‘Great American Nude’ series by Tom Wesselmann. He too was interested in devising novel approaches to continuing the long tradition of depicting the female nude in art. ‘Great American Nude #72’  (also dating from 1965) is a postmodern take on Manet’s Olympia. Rather than conforming to the confines of a square canvas, Wesselmann’s cut-out silhouette takes the form of a woman’s body. The artwork is a study in objectification; reducing the subject down to the most basic, sexualised elements;  bikini lines, red lipstick smile and blond pixie cut.  Both Wesselmann and Jones shared a deep admiration for the work of Henri Matisse and ‘Nude #72’ evokes the Papiers Découpés Matisse produced in his twilight years. 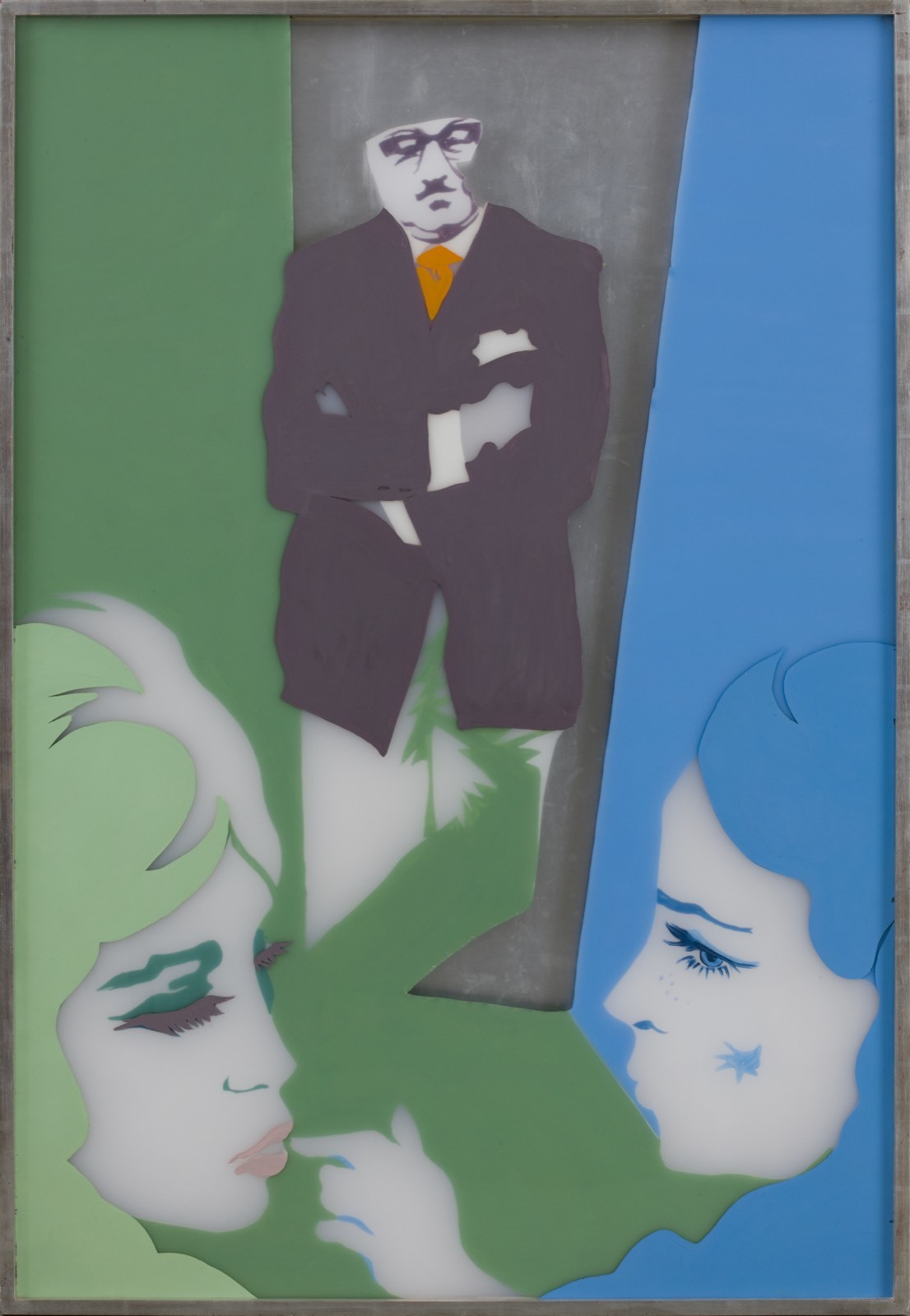 One of the strengths of this exhibition is the inclusion of lesser-known figures whose work demonstrates how Pop was not merely style, but a methodology that enabled a new generation to formulate an idiom that reflected local and idiosyncratic permutations. This is exemplified in this case by Belgian artist Evelyn Axell, who died in 1972 at the age of 37 but whose legacy has deservedly been gaining more attention over the past two decades. Axell relished the possibilities afforded by new materials that were becoming available at the time, such as plexiglass and coloured resin, which she employed in creating images in which the female form is venerated.

The piece included in this exhibition is unusual in relation to the rest of her oeuvre in that it is a portrait, It depicts the writer Karel Geirlandt, who championed contemporary art in Belgium and played a central role in the foundation of the museum where this exhibition now takes place. Axell portrays Geirlandt deep in debate with two women; perhaps dissecting the latest cultural happening. Here Axell is celebrating the fact that women are now participating in -and contributing to- the cultural conversation from which they had previously been excluded.  This striking construction in aluminium and plexiglass is ultimately a monument to the optimism of the era in which it was made; that brief moment when it appeared the rules regarding who could be an artist were finally changing and the possibilities presented by Pop seemed limitless.