The Critic as Artist 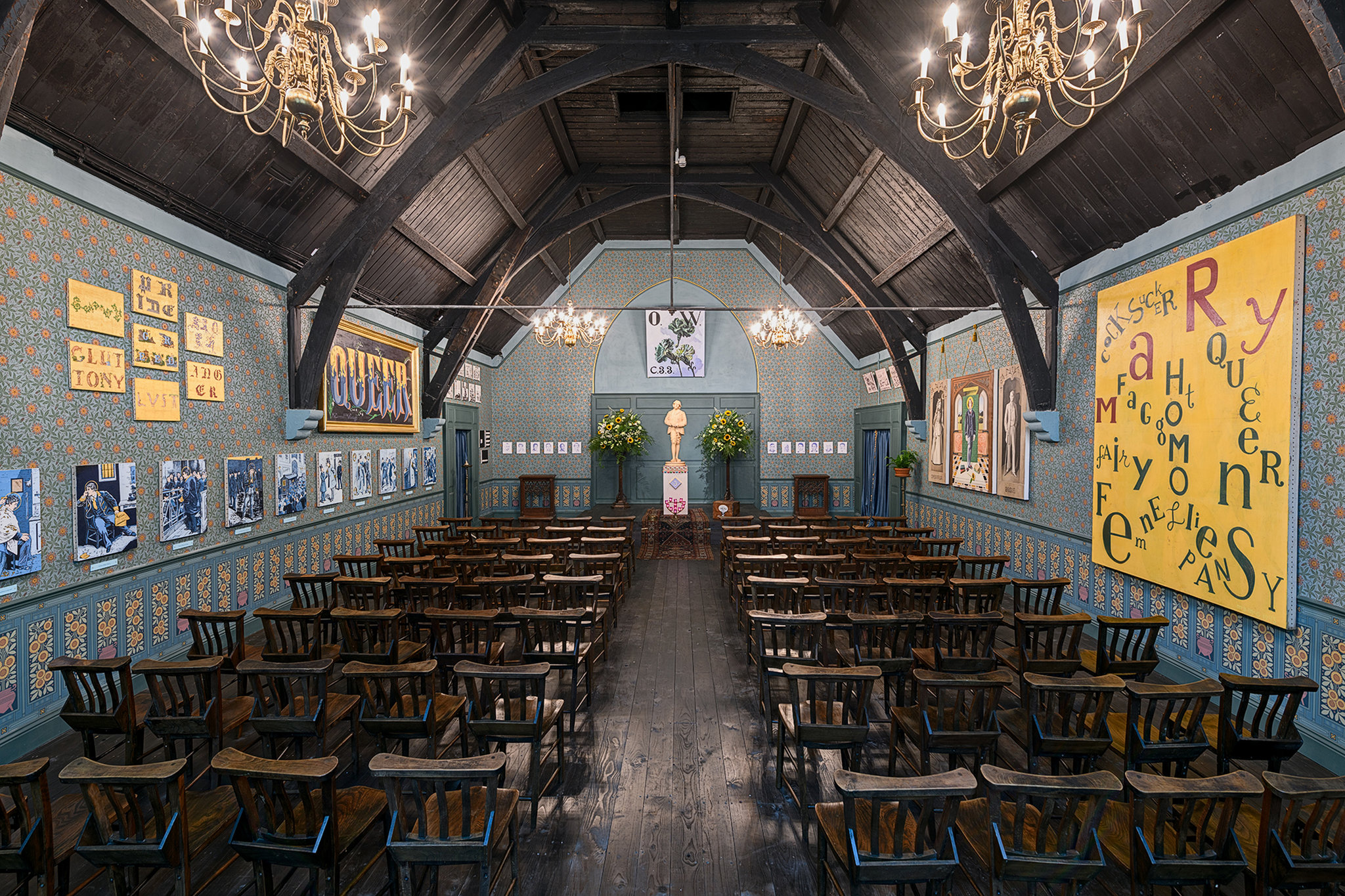 Peter McGough and David McDermott’s “Oscar Wilde Temple” takes over the space of the contemporary art gallery Studio Voltaire, which is located in a converted Victorian chapel in London. The altar features a statue of the playwright and poet made of linden wood.Credit...Photo by Francis Ware. Courtesy of the artists and Studio Voltaire.

In November 1900 Oscar Wilde died in a Paris hotel room, a penniless exile. In the decades immediately following the Irish writer’s death, Wilde’s name and work remained shrouded in stigma due to the scandal that resulted in him being incarcerated for two years. However, the advancement of the century saw his reputation redeemed and the aspects of his work which were once considered controversial and polemical lauded in retrospect as radical. Wilde’s predilection for the blithe exposure and amplification of the hypocrisies and oppressive mores of the ultra-stratified society which he inhabited is evident throughout his extensive body of drama, poetry and prose. Yet, despite or perhaps because of the success of this aspect of Wilde’s legacy, his work as an art critic and theoretician remains relatively unconsidered, despite the fact that this facet of his oeuvre has much to offer.

The role occupied by Wilde is comparable to that of Charles Baudelaire, a predecessor who devoted himself to similar aesthetic contemplation and a subversive, inflammatory literary career, only decades earlier. Though influenced by Baudelaire and the decadent current, Wilde is more accurately affiliated with the symbolist movement — a hidden touchstone which, like Wilde’s critical writing, is often overlooked.  The symbolists were one of the first movements to be distinguished by an inclination to cultivate collaborative ties amongst an eclectic coterie of artists, writers and musicians. In Wilde’s case, this ‘intermedia’ approach is evident in his painterly sensibility and his collusion with temerarious young artist Aubrey Beardsley on the illustrations for the publication of Salomé.

That the progressive work of the symbolist artists and other pioneers (such as James Abbott McNeill Whistler) entered into vogue during the years Wilde’s pen held sway is no coincidence. Though not formally progressive, the ideas communicated in works such as ‘The Decay of Lying’ (1889) and ‘The Critic as Artist’ (1891) are conceptually pioneering, while Wilde’s vivid prose and poetry constitute a congruence to the paintings of his visual artist peers, including Gustave Moreau, Odilon Redon and Félicien Rops.

Wilde’s declaration that art ‘need not justify itself by becoming useful; should never elevate the everyday; exists purely for art’s sake, and should never be produced for moral uplift’ seems pertinent in today’s context, in which the distinction between artwork and social work is denuded by the perennial fallacy that the ‘relevance’ or usefulness’ of an artwork can be judged in terms of its capacity to provoke ‘democratic dialogue’ within everyday ‘relational’ occurrences (from dinner parties to focus groups), conceived in order to ‘better’ the participant(s), while simultaneously salving the conscience of the producer. Even more radical is Wilde’s declaration in ‘The Decay of Lying’ that nature and life as they are observed and experienced are the products of a mass subterfuge originating from inherited ‘structures of feeling’. He expanded upon the common maxim that ‘life imitates art’ through a multitude of examples, the most memorable being his assertion that ‘at present, people see fogs because poets and painters taught them the mysterious loveliness of such effects. They did not exist until art invented them’.

In an age dominated by the concept that art should reflect nature and life via realism the true innovators were, according to Wilde, those who embraced artifice to produce an art that was, as the pure product of the imagination, confidently self-referential. In ‘The Critic as Artist’ Wilde cites Jesus Christ as an example of such an artist. Stating that Christ’s charismatic performative power was the ultimate art form, Wilde rhetorically questions where mankind might be were it not for the popularity and imitation of ‘Christ the Great Artist’. That Wilde himself was a creatively performative personality is evinced by the intensive American tour he undertook in 1892. During this tour, Wilde tapped into the escalating cult of the personality and took advantage of the ensuing mass media frenzy to promote his work. Delivering countless lectures to thousands of people, Wilde confirmed his status as a provocative ultra-aesthete by strategically overstepping the bounds of what was considered morally and socially proper – an act which included deriding the British Empire and broaching the contentious issues of Marxism and Irish Home Rule alongside some more frivolous matters relating to interior design and women’s wear.

My proposition that Wilde’s legacy may offer a key to replenishing the vitality of art criticism is aroused by his declaration that the relationship a critic develops with an artwork should be symbiotic, rather than sycophantic. This could only be achieved, according to Wilde, once the critic embraced the artwork as a point of departure for a simultaneously referential and autonomous text. Wilde argued his point through the form of a Platonic dialogue, which inherently highlights the importance of an analytic stance while also underscoring that in art (and indeed reality itself) there can never be an ultimate truth, because subjective perception and common opinion is what determines reality. In order to flourish, art criticism must resist mere description and take Wilde’s lead to expand the role of critic beyond that of mere courier. Only then will criticism be empowering to urge viewers themselves to explore work in a depth beyond the play of influence and reference which runs closed circles around artworks without ever truly touching them.