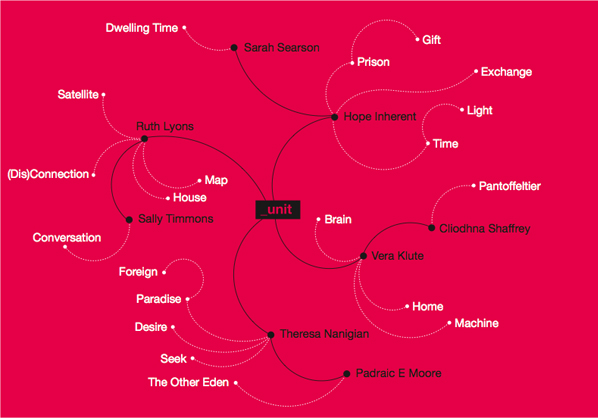 Project history: Unit was the third in a series of visual art projects in County Laois.  The first took place in 2006 when Laois Arts Service developed an Artists’ Symposium held at Emo Court, a beautiful rural country estate and parkland.   Artists were asked to respond and to make new work in this rural environment of over a number of weeks. The artists included Barbara Nealon, James Hayes, Julie Merriman and Lisa Fingleton.

In 2007 Laois Arts service commissioned Finding Portlaoise, curated by Maria Kerin, this project focused on a number of urban interventions, which encouraged artists to address the changing context and growth of Portlaoise town. Which at the time, had experienced significant social and infrastructural changes. Further details of both these projects are available on request from Laois Art Service.

Unit the project, 2008/09 was led by Sarah Searson and commissioned by Laois Arts service as a residency project. The project asked artists to spend time working within the physical and material sphere of the town, exploring its social, economic and geographical aspects. Artists and curators worked together to highlight everyday concerns that might be apparent and of interest them. Curators and artists worked closely together throughout the project. Four curators were invited to nominate four artists; the key participants were; Padraic E Moore and Theresa Nanigian, Sally Timmons and Ruth Lyons, Cliodhna Shaffrey and Vera Klute, Sarah Searson and Hope Inherent.

The Unit project was designed to offer an alternative way of commissioning public art projects in the town and surrounds of Portlaoise. The projects structure was designed to be supportive of thinking, making and writing. The ethos of the project was to work by mutually investing in the key participants. Inviting artists and curators/writers to work alongside each other while thinking of their practice in relation to context and place rather than be asked to respond to it.

The artists had in-depth support from the writers/curators along the time frame of about five or six months. The local authority financially and administratively supported the project and worked with the lead curator Sarah Searson on the development of its structure.

At the time of developing a context for the project in early July of 2008, Sarah Searson began to research into the stirrings of economic stresses which were beginning to splinter into the town. So it was from this point of research she began to develop a number of briefing documents for the artist / curator parings. Four projects manifested themselves in very different ways, with both tangible and intangible outcomes.

Public discussion about the _Unit project was held at the Dunamaise Theatre, Portlaoise on Friday 5th December 2008

Artists and the curators from the project presented and discussed aspects of their practice and their research experiences for the project.

Sally Timmons and Ruth Lyons converse about research and working on the project in a transcribed interview.

A public exhibition took place in various locations in the town from the 19th-23rd of May 2009.

Artists workshops were run in association with the project in the Dunamaise Theatre, on the following themes.

Written Representation: selection and curatorial processes with both public and private bodies place increasing expectations on artists to represent themselves with clearly and articulately written proposals. This informal workshop lead by Sarah Searson was intended to give participants time and space to review and revise their artists statements and biography. The workshop was supported by reading material and suggestions for further research.

Visual Representation: The workshop lead by Claire Nidecker suggested ways of organizing your digital portfolio and understanding available technology. The focus was on the importance of understanding digital imagery, compatibility, and how this knowledge makes it easier to upgrade representation. The workshop was informal and handouts suggested areas for further research.