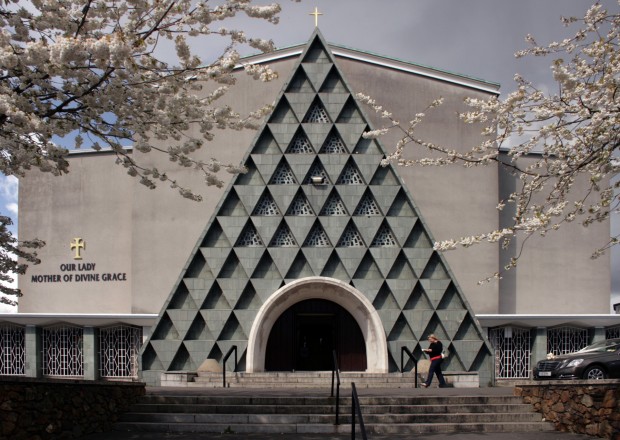 Ireland has never been a country associated with Modernist architecture. Only in the years following World War II were progressive building methods and styles adopted in the state. Even then, the only sectors to really embrace innovative approaches to construction were those relating to infrastructure- edifices built for energy provision or transport. This is exemplified by the fact that one of the few examples of Modernist architecture in Ireland is a bus depot constructed in 1953 in the international style (1).

In comparison to the neighbouring United Kingdom, architectural approaches to residential and commercial buildings remained conservative and reactionary. One type of architecture which did tentatively embrace progressive approaches but which is often overlooked is ecclesiastical architecture, specifically that commissioned by the Catholic Church. The focus of this dossier is a selection of particular notable examples of ecclesiastical architecture constructed between 1960 and 1980. Although only a couple of these structures possess the typically Brutalist characteristic of béton brut they all display the architects desire to create austere, functional and honest buildings.

The buildings included in this dossier must be viewed in the light of liturgical reforms initiated by the Second Vatican Council (convened between 1962–65, (“Vatican II”), arguably one of the most important religious events of the last century. Initially led by Pope John XXIII (1958–63) and then Pope Paul VI (1963–78), the Council aimed at aggiornamento; the updating of doctrines and practices implemented by the church to engage with the congregation. Rather than formulating new dogma the aim was to encourage the clergy to educate and inculcate in more transparent, accessible ways. In addition to reforming liturgical practices, the Second Vatican Council allowed for the alteration of existing church buildings and permitted churches to be constructed in a manner that reflected the architectural trends of the 1960s and 70s. In the case of Ireland this heralde the rejection of the traditional Neo-Gothic church design in favour of new styles which could be described as tentatively modernist. The permission to accept more progressive techniques also facilitated the construction of larger buildings. The almost industrial scale on which many of these buildings were created was unprecedented in Ireland. Another of the reforms advocated by Vatican II (apparent in several of the images in this dossier) was that the altar be turned around to face the people of the congregation so that it resembled the stage of a theatre-in-the-round. These were designed to be dramatic spaces in which ritualistic displays of propagandistic power could be orchestrated.

Ultimately these developments can be viewed as an attempt to rejuvenate the authority of the Catholic Church; they represent a desire to expand and maintain the congregation and reinforce the sense of power held by the Church whilst also strengthening cultural ties with the Vatican. While these structures do symbolise the hegemony of the Catholic Church they must also be viewed as providing the only opportunities for ambitious architects in Ireland to explore the creation of atmospheric lighting, fabrication of plastic forms and application of diverse textures and surfaces. This is particularly notable in the case of the churches of Liam McCormack which are unparalleled in Ireland and betray the strong influence of Eero Saarinen.

Éire Ecclesiastica was compiled to provide a local insight into one of the few ways that Modernist styles and approaches to construction were successfully adapted to the Irish context. As the images contained within this dossier reveal, the buildings are an amalgamation of vernacular elements and architectural styles. These buildings may not compare or compete with the high points of ecclesiastical architecture such as Le Corbusier’s Notre Dame du Haut at Ronchamp (1955). Nevertheless, they are noteworthy and admirable spaces of worship conceived to feel and look sacred. Today, failing attendance and infrastructural problems combined with a widespread rejection of organised religion means that the fate of several of the structures featured in this dossier is uncertain. Indeed, one of the edifices (Church of the Annunciation) is scheduled for imminent demolition. While the original function of these structures has become obsolete, and the organisation they represent has been exposed as morally bankrupt, their unique place within the topography of Irish architecture deserves acknowledgement.

1. Busáras was designed by Michael Scott and his team of young architects and designers between 1945 and 1953.