The Width of a Circle 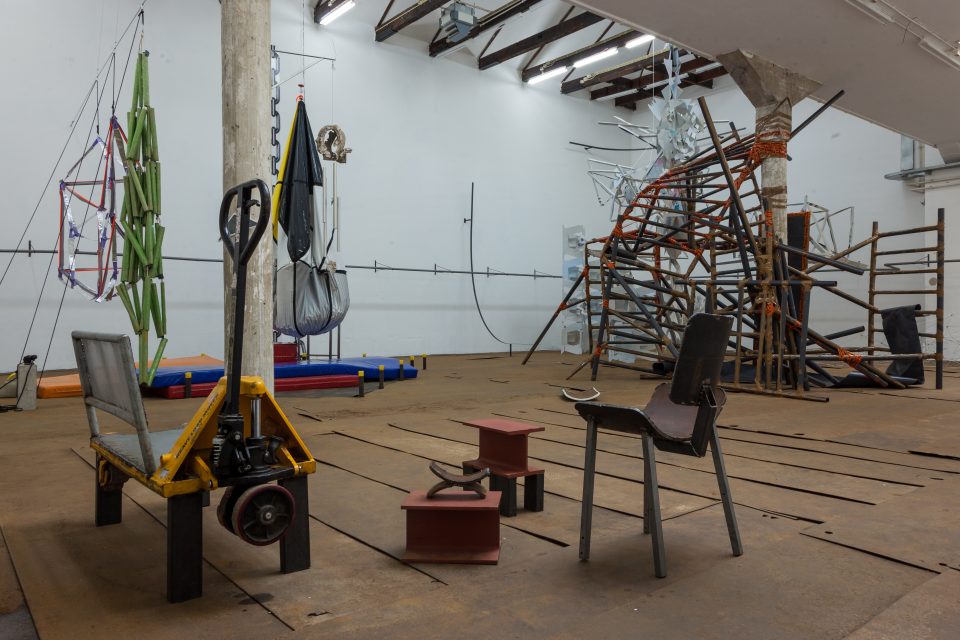 The Width of a Circle is a project founded upon strategies conceived to reveal the possibilities inherent within imposed constraints. Participants -all of whose practice is predominantly sculptural- were invited to take the five archetypal forms known as the Platonic Solids as a point of departure in developing new work.

At the time of writing, an atmosphere of intense industriousness pervades the exhibition space at W139 with everyone absorbed in some form of manual activity. Plastic tubes supported by steel armatures are being bolted to walls; an edifice evocative of the minaret of a temple has been erected. Elsewhere a mechanised crane suspends a form resembling a distorted cube. A scaffold, modelled from carton pipes held together with tape, towers towards the ceiling and sprawled on the floor a wire organism is emerging horizontally, the fruit of painstaking handwork. While some possess a jerry-built aesthetic others are more ordered in their composition and although all are still in the process of materialising one sees that these works are unified by several characteristics. Each seems to respond to the particulars of the environment, to utilise the walls or the height of the venue, and there is also an omnipresence of geometry within each of the pieces. 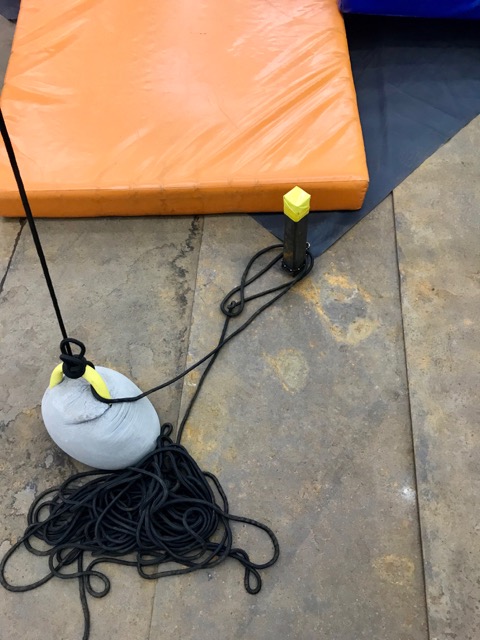 The Width of a Circle uses imposed creative parameters as a strategy for exhibition making. Participants in the project -all of whom work mainly in sculpture- were encouraged to take the five archetypal forms known as the Platonic solids (see diagram above) as a point of departure in conceiving new work. In the Timaeus (written c. 360 BC.) Plato claimed that the universe was a product of grand design, a creation of divine intelligence in which these forms were the building blocks. He theorised that each related to a ‘classical’ element; earth was linked to the hexahedron, air the octahedron, fire with the tetrahedron and water with the icosahedron. A fifth solid, known as the dodecahedron was seen as representing a variety of metaphysical and intangible ideas and was connected to the element known as aether.

Like Plato, the German astronomer Johannes Kepler postulated his own cosmology in which the Platonic solids were also at the core. Kepler believed that the five solids provided an essential architectural structure for the universe. In 1596 he published his astronomical text Mysterium Cosmographium in which he suggested that the solar system was comprised of interlocking Platonic forms that moved harmoniously inside each other. The blueprint he created to evoke this concept shows all the solids within a sphere. In the the 20th century, the pioneer of European Modern Dance, Rudolf von Laban also claimed that the substructure underpinning the physical world echoed the forms of Plato’s solids. In the 1920s he devised a range of spatial exercises which he referred to as his praxis of Space Harmony or Choreutics. Laban’s theory of Space Harmony involved mapping a dancer’s movements in flowing diagrams (comparable to musical scales) that resemble the five Platonic solids. Figures like Kepler and Laban followed a lineage dating back to antiquity which looked to the Platonic solids with fascination, not merely as a source of aesthetic exploration but of mystical potential. In recent centuries technology has emerged allowing the world to be viewed microscopically, revealing chemical and biological structures that resemble the Platonic solids. In the natural world, the solids are present in the form of biological microorganisms known as radiolaria and in the constitution of certain viruses. This lends credence to the validity of the seemingly fantastical claims made by Plato et al. millenia ago, that the entire physical world is comprised of various permutations of these geometric forms.

In taking the Platonic solids as a starting point for this project, It was hoped that the visual vocabulary they suggest would offer an impetus; not only to lend cohesion to the final manifestation but also to encourage the emergence of a process that was an end in itself. As Plato linked each of the geometric forms with a classical element, so the decision was made to restrict what ‘elements’ the artists could use in their work. An analogous system has been devised in which the four classical elements were transposed onto ubiquitous materials: concrete, metal, plastic and paper. In addition to these commonplace materials, participants were also invited to harness what was described as a fifth ‘animating’ element. The Width of a Circle provides an insight into the variety of approaches that emerge even when form and matter are to some extent restricted. The different responses underscore a tension between the immutable logic and coherence of geometry and the somewhat contingent nature of the objects which materialised.

The title of this exhibition reflects a concern with geometry and alludes to 1 the idea of collaborating as a non-hierarchical self-organised team. In the months leading up to the exhibition the artists were provided with access to a warehouse in which to develop their work together. The decision to cover the floor of the exhibition space with steel plates was followed by a process in which all the participants contributed, thus transforming ‘the ground’ upon which the exhibition was then constructed. This facet of the exhibition emphasises the process-based character of the project and is a testament to the possibilities of shared production and creative symbiosis. In Zen philosophy, a circle drawn or painted by hand in two gestural strokes is known as an ensō. The idea inherent in the ensō is that depicting a form as primary as the circle facilitates a process of liberation from cerebral rationality. Similarly, the aim of adopting the Platonic solids in this project was to construct specific conditions in which a creative process could occur.