Remarks on Now’s the time 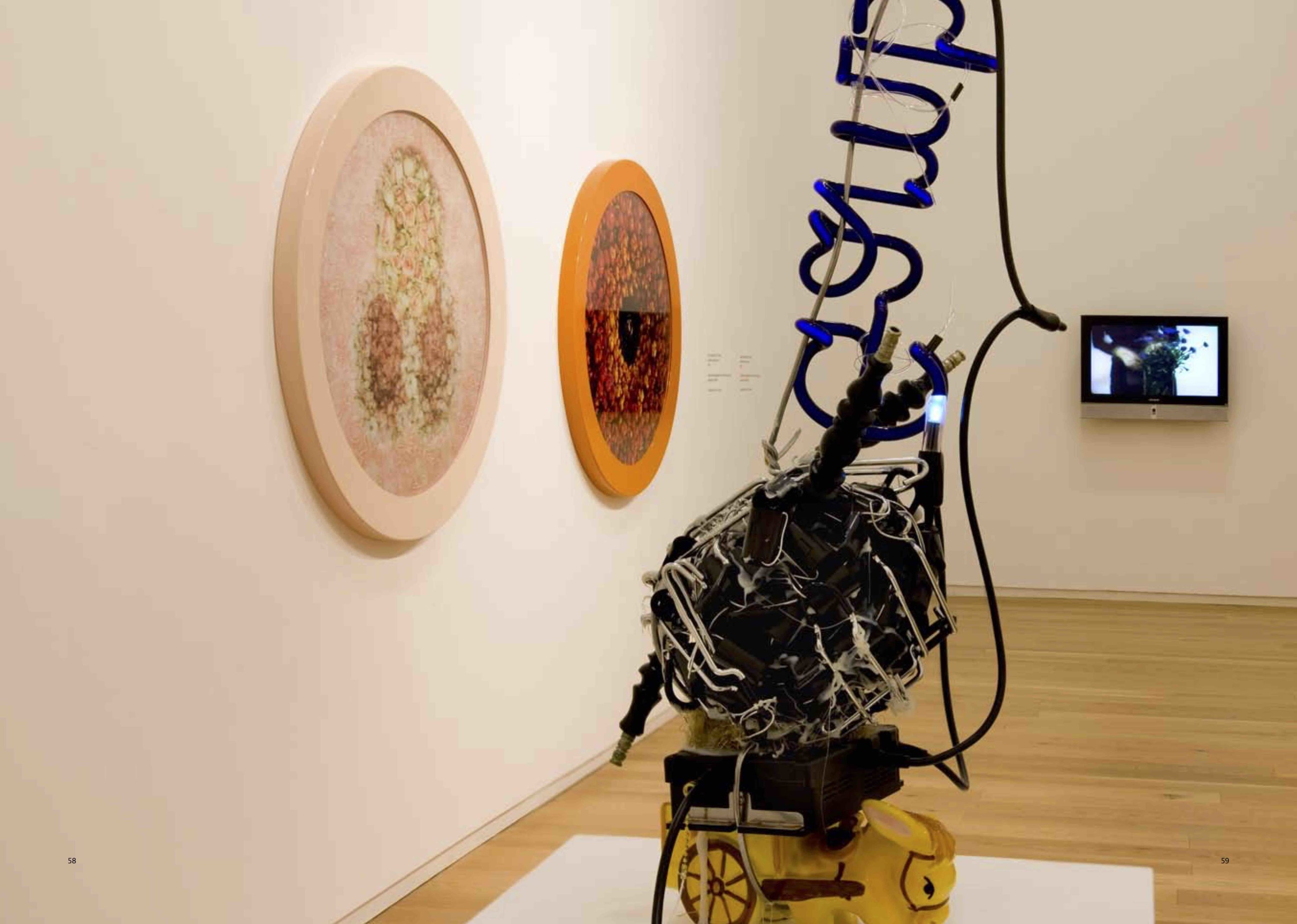 Within Western visual culture, an obsession with resurrection and excavation of earlier modern periods intensifies as we accelerate into the new century. Though the proclivity toward revivification is not novel, the causal factors behind this phenomenon alter cyclically with the passage of time. Three decades ago – as postmodernity entered what could be considered its peak – a revivalist impulse was perversely motivated by a desire to castigate and repudiate the legacy of the Modernist Project which had, for the most part, been predicated upon ideals of progress and faith in the future. Seismic shifts have occurred since this period, which was marked by an inclination to subvert, deconstruct, and renounce the organising principles of the Modern past. While it is not uncommon for contemporary generations of artists to subjectively appropriate and utilise pre-existing concepts and frameworks, these moves are spurred not by a desire to deconstruct, but a necessity to reinstate and discover ideals that have been almost entirely eliminated. Today, the hunger to question the authority of the canon, interrogate the grand narrative, and repudiate the power of the auratic art object no longer dominates. Contemporary reference to precedent is motivated instead by a necessity to conceive of a functional framework imbued with an optimistic tone.This shift is manifest in the work of cultural producers who investigate the art historical or socio-political past, as well as the work of those who cultivate ‘archival aesthetics’ by assembling, preserving and displaying artefacts in an act of cultural museumification. Though the legacy of many of our recent predecessors might now be registered as somehow utopian, there is a tangible tendency amongst contemporary artists to investigate the potentiality of prefigured paradigms that may be considered unfinished and, therefore, still loaded with possibility.

The penchant for those idioms of the past that are simultaneously reassuring and challenging can be causally connected to the impulse to heroicise, revere and perennially reappraise those exceptional producers who departed life prematurely, leaving an unfinished legacy that may be re-accessed and re-interpreted in subjective terms. Hegel claimed the hero was an incarnation of the Volksgeist of a particular culture and, indeed, the universal tendency to heroicise seems to intensify in the face of spiritual bankruptcy, existential crisis and a widescale demotion of the theistic force majeure. Even those whose declarations announced the death of God reiterate the notion that divinity, or something approaching it, can stem from the creative capabilities of the extraordinary individual. Of course, the idolisation and heroicisation of the cultural producer also fortifies and furthers an esoteric and supreme legacy of art that, in turn, justifies the intensity and seriousness so many have invested – and continue to invest – in its construction.

While interpretation through biography and anecdote narrows the scope for an objective analysis of an artist’s work, such an approach is inescapable in the case of artists who depart prematurely. The inconclusivity resulting from untimely termination provides a point of departure for a perpetually unfolding and unfinished narrative, the constant return to which results in an immortalisation of the absent subject. While media, fashion and technology conspire in the resurrection and occasionally necrophilic elevation of the work and personality of the prematurely deceased, the process takes place predominantly in the custodial institutions – museums and galleries where memory is rekindled, or invented. It is through the artifacts produced by exceptional creators that their cult is manifest. In addition to creating a space that approaches a fulfillment of metaphysical and incorporeal needs in a legitimately humanistic manner, the custodial institution permits the individual to cultivate a polytheistic pantheon. Artworks become vessels within which the essence of the creator’s life is contained – indexes of an existence in a society overwhelmed by an excess of commodities.

The excitation and sensation evoked by the chattels of the prodigious dead cannot be explained by fiscal or aesthetic value alone, nor can it be drawn solely as an upshot of the mechanics of mass media, advertising or celebrity production. Even without these symbiotically functioning structures of amplification, the narrative surrounding certain objects – like some of those featured in this exhibition – results in their inculcation with a thaumaturgic value and totemic power. This partially explains why certain objets d ’art incite practices which, though normalised, have origins in a mystical, ritualistic impulse that might seem incompatible with a rational and incredulous society. The surge of devotees traversing the globe on pilgrimages to temples where redemptory revelations may be experienced in the presence of exceptional art objects exemplifies the continued power of the art object to inspire awe. Perhaps this ritualistic response to the art objects of the prematurely departed might be viewed as a latter day equivalent to practices which surrounded the cult of the relic that proliferated in medieval Europe, whereby the bodies of saints were dismembered and disseminated to an adoring populace. Hence, the widespread societal surge in aesthetic appreciation cannot be explained solely through the affordability of travel and the promotion of fine art as a tourist attraction. There remains an underlying need to affirm the presence of the miraculous and the sublime, a fundamental necessity for an ontological transcendental order.

While the production and consumption of art may be seen as possessing inherently religious connotations, numerous artists have produced work in which references to liturgical rites and rhetoric appear particularly explicit. Whether producing work as a form of critique or as a means of satisfying a hunger to pioneer what Robert Smithson termed ‘the art of new limits’ (1), the manner in which these artists extended their practice beyond the production of discrete art objects fortified and galvanised archaic notions of art as something super-sensual.

In the cases where already explicitly religious references are compounded with the tragedy of the premature death, the narrative of the artist’s life assumes an archetypal mythological quality. The omnipresence of the deceased artist via the dissemination of objects and reproductions may be viewed as a posthumous act of exploitation, but this also represents a permutation of transubstantiation, whereby artists are destined to be perpetually resurrected through semi-accurate reconstitution. An engine is thereby created for the endless revision of narratives and the authoring of new myth, without which, Piero Manzoni declared, ‘art does not exist’ (2).

Art cannot be a surrogate for religion, yet connections between the two emerged from the same sphere and may ultimately satisfy similar needs. Christ’s premature death at 33 (the circumstances of which have become an emblematic spectacle subject to endless artistic representation) inaugurated the myth of his immortality, upon which the cult bearing his name is founded. Though there are, of course, differences, the case of Christ, like the artists featured in Now’s the time, evidences that early death constitutes not only an appropriate narrative conclusion but also a ‘profitable’ career move. The cult of the prematurely departed artist is connected to, amplified, and made radiant by their compatibility of such figures with the requirements of a techno-capitalist market in which youth, genius and tragedy make for the ultimate spectacular commodity. As the scarcity of the limited commodity is confirmed, articles become charged with an adjuvant, ‘extra monetary’ value tantamount to the concept of ‘real presence’ upon which the Christian rite of communion is founded. The role of the artist within society has changed radically, yet psychic recollection of artist as shamanistic figure is retained. Furthermore, works of art or cultural artifacts have assumed an additional value in our accelerated age by fortifying the structural reality of, and giving material evidence to, chronological, linear temporality.

Art as salvation is not a new concept. In the 1890s, Albert Aurier proclaimed: ‘One love alone is still allowed us, that of works of art. Let us, therefore, fling ourselves upon this last plank of salvation. Let us become mystics of art’ (3). In the hypermodern world this proposal has assumed additional gravity. For today, it is art that supports and permits idealism, and art alone that produces demigods and martyrs deemed worthy of veneration. If art cannot substitute for a proscriptive religion, its mythology can nevertheless be a source of meaning that is supreme because it permits space for a construction of the self. In this way art goes some way to illuminating the myopic chamber that is life.

Today, in the wake of the last wave of postmodernity, we arrive at an impasse whereby the ontologies of the recent past have become incompatible with the demands and methods of contemporary living. In this milieu those exceptional creators who distinguish themselves, independently from theistic gods, as originators so significant that the full potential of their contribution would only become evident long after they have departed, offer an antidote to this nihilistic void. Faith and adulation may be invested in such inspired, self-propelled authors who, in producing objects or ideas that endure beyond the caprices of fashion, inspire future generations to take part in the cult of creation, therein providing a means of temporarily consolidating a sense of community – or the illusion of one. Charles Baudelaire discussed how he gleaned solace and succour from what he saw as Modern art, remarking that it offered ‘spiritualité ’ and ‘aspiration vers l ’infini ’ (4) (‘aspiration toward the absolute’). Several of the artists featured in Now’s the time had less than a decade to produce work that would be posthumously lauded as seminal and this exhibition itself reinforces the problematic situation whereby an artist’s work is encountered in the first instance through the finite closure of a tragic end. However, it is not the death of these artists that is ultimately important. What is important – and worth celebrating – are the lives of the artists which are sustained and ongoing through the powerful legacy they left behind, via which we may obtain – as did Baudelaire – rare, precious moments of grace and a chance to meditate upon – and surrender to – the ecstasy of life.

(1) Robert Smithson “Fragments of an interview with P.A.Norvell, April 1969” (edited by Lucy Lippard) in Six Years; The Dematerialisation of the Art Object from 1966 to 1972 (University of California Press, Berkeley, 1973).

(3) Herschel B Chipp with H. R. Rookmaaker, ‘ “Essay on a New Method of Criticism” by G. Albert Aurier’ in Theories of Modern Art: A Source Book by Artists and Critics (University of California Press, Berkeley, 1968).