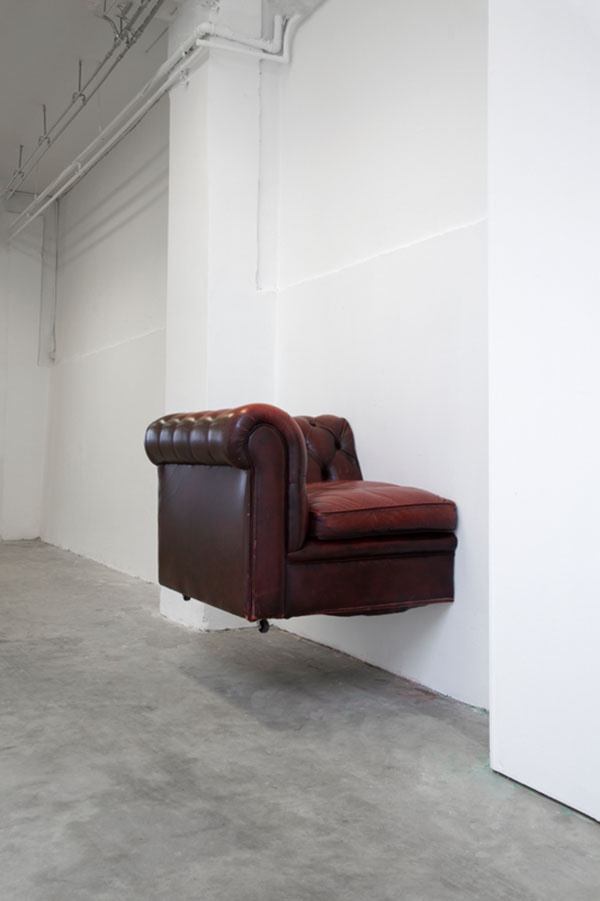 Pádraic E. Moore: Secondary emotions are supposedly the emotions one experiences in response to ‘other’ emotions. The term itself represents a very human compulsion to categorise emotional states into hierarchies. Perhaps you can give me some insights into why you chose this title for your show?

Alex Farrar: I was attracted to the idea of framing the exhibition around the ‘second set’ of emotions, as the ones that linger, that cause problems, and I wanted to find a name for the exhibition that foregrounded, just as the works themselves do, feeling over thinking. I don’t know why all the works (besides the Happy Valleys) are named after (questionable) psychological phenomena, but maybe it helps to explain that I am looking for a descriptive and assistive ‘name’ rather than a title.

P.E.M. There are several different approaches taken in this exhibition. There are the residues; sculptural objects which represent a kind of index of the human body via fragments or debris and then there is the Psychosocial Seating; artworks that elicit a specific response from the viewer in the form of an action. Perhaps you can elaborate upon these different approaches?

A.F. I am not content to be one kind of artist, I view my practice as balancing several approaches; predominantly performance and installation. I’ve always discussed my work within the context of performance, though in the past I have worked in a much more context specific way. My hope for these groupings of objects as seen in this show is that I can create a situation in which the environment is somewhat charged. It is perhaps important to note that these components all ultimately came from my own studio. In that it was the starting point, the sofas were removed and in the process I discovered things underneath that I was intrigued by. Crucially these were things which I hadn’t kept but also hadn’t thrown away, tests, failures and non-starters. The fingernails which I found upon the floor were a key starting point for the sculptures. Having collected the bitten off fingernails from my studio floor I then enlarged them with an overhead projector, the drawings were cut out of casting sand and molten lead was poured into it. I use them dynamically within a space so that they litter the floor and walls. They appear simultaneously as a portrayal of doubt or anxiety (nail biting) orientated to form a smile made from lead, a heavy and poisonous metal.

P.E.M. Georges Bataille’s concept of l’informe (formlessness) was first introduced by the philosopher in the 1920s but then elaborated upon in the 90s by Rosalind Krauss and Yve-Alain Bois who used the concept as a critical lens in their book Formless which I’ve been reading. Has his work had an influence upon you? There seems to be a connection to Behavioural Residues.

A.F. All the works derive from an emotional impetus, an image/thought that triggered some kind of recognition or emotional response. Behavioural Residues emerged from what was essentially a collection of remnants, a low vernacular vocabulary of anthropomorphic or inanimate waste. I think ‘abject’ as defined by Julia Kristeva’s in Powers of Horror is probably the most accurate term to describe this.

P.E.M. Your proclivity for using found objects continues with the Happy Valleys, a series which formally reminds me of the early sculptures of Anthony Caro. What was the genesis of this work?

A.F. This work shares the same starting point as the others in that it is ultimately a found object, the main difference is that ‘the remnant’ in question was more public, less studio-based, although it still retains a distinctly human quality. I saw the image of a bike, stripped of all its accoutrements and interlocked with a ‘nietje’ on a tv show shot in the area that I grew up in and started collecting other related images. Struck by the tenderness and of course sculptural transformation of these three elements that share a common material, I wanted to intentionalise the arrangements, whilst flipping the gravity and playing with them as a sculptural assemblage. I wanted to unify the three components, the lock, the bicycle and the railing so I welded them together and painted them with a colour that had a unifying element. The works are now a light grey colour and the placement abstracts them from their original purpose.

P.E.M. You used the word tenderness to describe the relationship of the three components. Can you elaborate upon what you mean by tenderness?

A.F. The scene had a certain emotional resonance. The bicycle had been entirely stripped of its wheels, saddle etc. and all extraneous elements. There was a certain pathos to the way that this incidental assemblage of objects was locked in an embrace.

P.E.M. It would seem a significant shift has occurred in your practice over the past two years. Your previous work seems to have been concerned predominantly with documenting transactions in which structures of the visual art world and economies of value were investigated. Your recent work has assumed a more poetic perhaps even romantic quality?

A.F. The sculptural works in this exhibition are certainly indebted to the experience I had of being suddenly given a large private studio (at the Rijksakademie) and how I negotiated this context. I didn’t make anything for the first six months at the Rijks. It was a period of change in that I took stock of my work. Working in one room that looks much like the room next to me and having little to latch onto as a clear starting point had an interesting impact. I became interested in consciousness and particularly in notions of panpsychism; the concept that literally every object possesses some mind-like quality. There is always an emotional starting point to the work. I try and evoke the emotional anchor within my work and that is something I’ve relaxed about and I am now certainly working more lyrically.

P.E.M. You mentioned previously that the Psychosocial Seating sculptures also ‘function as a veiled metaphor for reading’ and that the height at which they are installed is based on a ratio you made that calculates the difference between the height of an average sized four year old with an average sized adult. The intention was to enable the viewer to experience the seating position of a four year old, the age at which most people begin to read independently. This led me to wonder if literature has had an impact upon your work? When I first viewed your work I was reminded of the writings of Samuel Beckett. In particular, the tendency in Beckett’s work to focus upon a particular part of the body as a medium for communication.

A.F. I read much of Beckett in art school and was thinking recently about the Not, I: the work features an actress seated on stage with just her mouth spot-lit. However, I think that if there was some author who has influenced my approach it’s got to be B.S. Johnson who has been a major influence. He was a writer who was fundamentally preoccupied with how certain literary forms had become exhausted. Although he wanted to be a storyteller he was also frustrated with the restrictions of the novel and devised certain experimental strategies and structures which enabled him to push the limits of the form. I’m drawn to Johnson’s desire to create open ended narratives. In his book The Unfortunates (1969) the various sections of the book are unbound (the 27 sections are presented in a box) so the reader can ultimately devise the sequence of the narrative. I appreciate this open ended inconclusiveness, which is something I aim for in my own work. I hope to create situations in which the viewer can devise their own readings and meanings.

P.E.M. That idea of open endedness is clearly fundamental to the work. There is a desire to ensure that ‘life’ or dynamism remains part of the artwork by involving the audience to literally activate the objects. This was apparent in a previous work Narrative Break and is also apparent in the Psychosocial Seating series, which solicits activation from viewers. Perhaps this brings us to the romantic notion of the artist being a medium for exchanges and possibilities, a channel for experiences.

A.F. There is a moment, a kind of recognition when I have made something, an unexpected sense of surprise. I want to share this moment, I want the viewers to experience some sense of involvement, I want to trigger new thoughts and want them to approach the work in a way that they feel they have discovered something for themselves. I was reading Henri Bergson’s book Time and Free Will: An Essay on the Immediate Data of Consciousness at the time and was interested in what he wrote about how artists bring about an emotional/conscious change in the viewer through mechanical means. I am interested in exploring what it means to be here in the gallery space, of anchoring the viewer in the act of viewing.