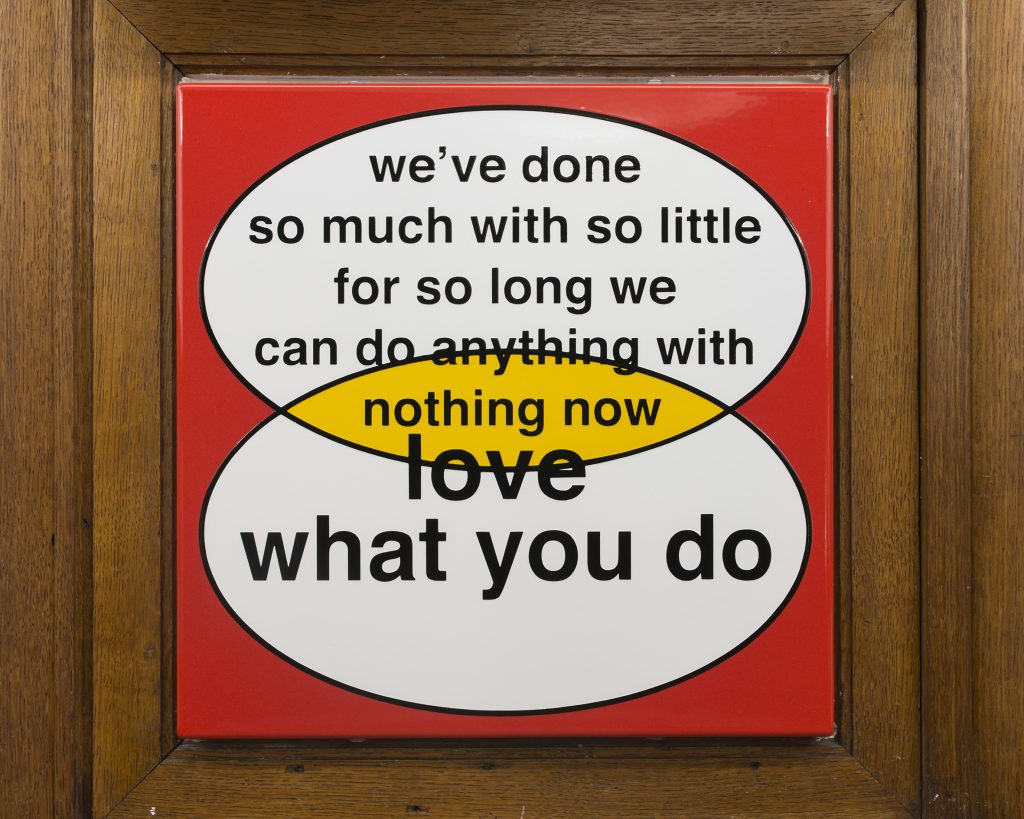 Exhibitions at La Maison de Rendez-Vous are often something of a duel between the work on display and the gallery’s heavy wood panelling and parquet floors. In the case of Nora Turato’s solo show, the dissonance between her lurid wall painting and enamel plates and the timbered interiors is exhilarating in intensity. The enamelon-steel pieces evoke the plaques Marcel Broodthaers began producing during the 1960s by embossing ‘industrial poems’ onto plastic signage. Like Broodthaers, Turato is preoccupied with the power and mutability of language. 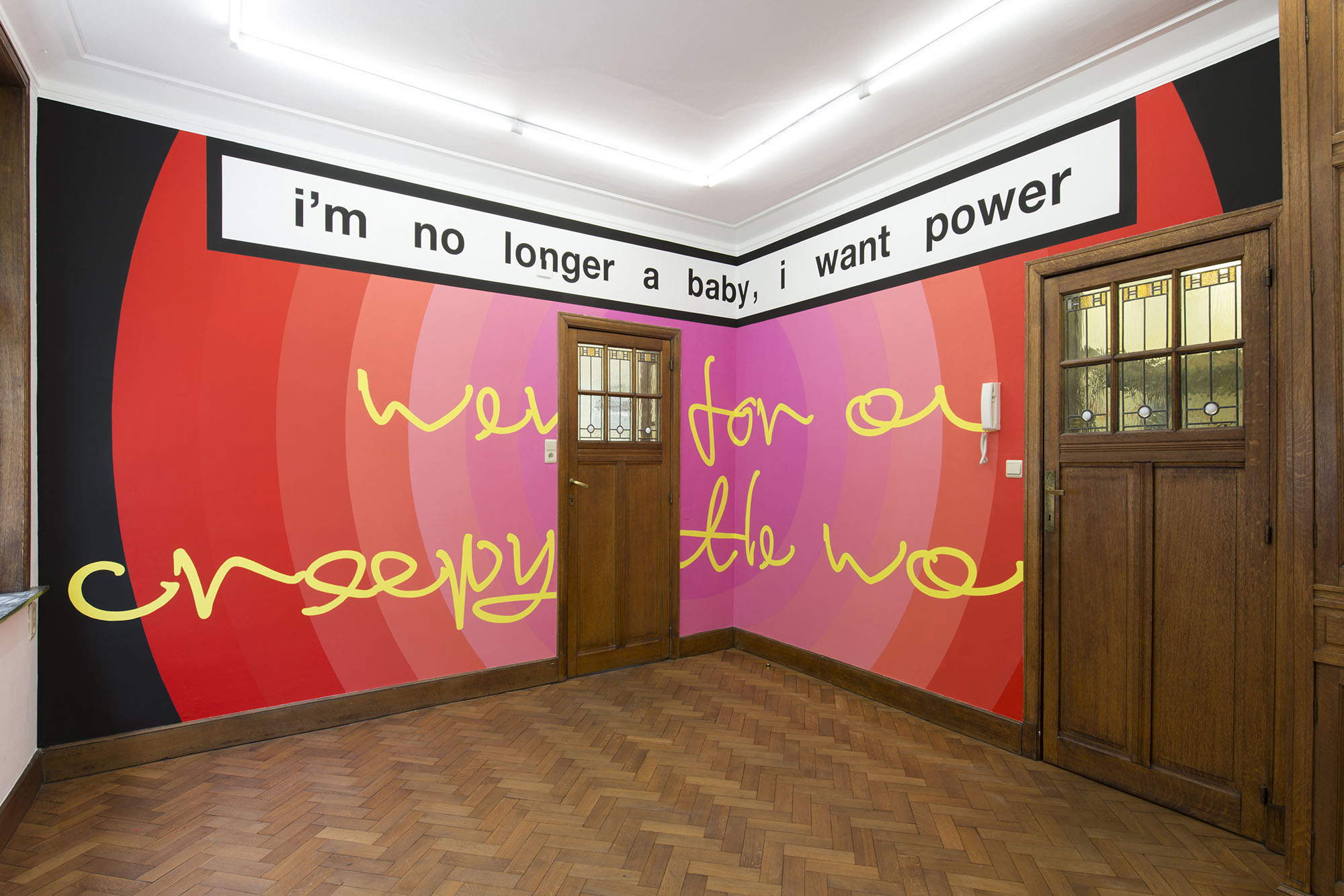 However, the multifaceted oeuvre of this Croatia-born artist could only have been created by a digital native au fait with the hyperaccelerated, media-saturated culture of the present. A fundamental strategy in Turato’s methodology involves gleaning fragments of phrases and quotations from a multitude of disparate sources: adverts, internet memes, songs, movies, occasionally her own unconscious. This raw material is amalgamated into ‘pools’ resembling data scrambled by viral malware. It is from these ‘pools’ that Turato extracts cutups for use in the formulation of performances and more durable artworks, such as the pieces featured here. The textual delirium characterising this work is redolent of the phenomenon of spirit channelling, where discarnate entities ‘speak’ through a medium. In the wall-based pieces, diferent ‘voices’ or sources are distinguished by the use of various typefaces, each possessing its own semantic associations. 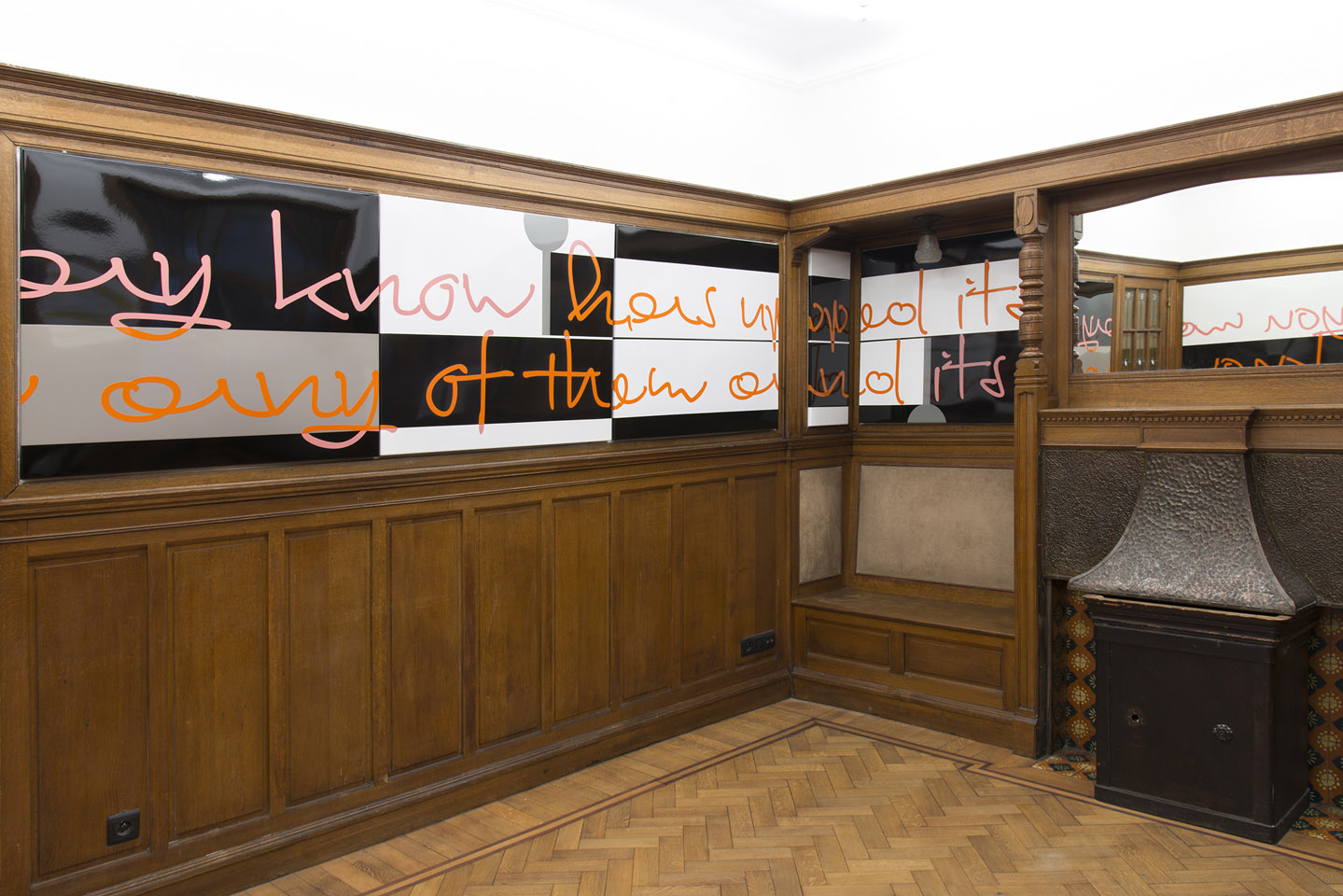 One of Turato’s trademarks, for example, is her use of the instantly recognisable bold Helvetica framed by a black border as used in tobacco-packaging health warnings. Less familiar – but more intriguing – is the longhand, partially made up of generic script font, that looks like automatic writing spewed out via a séance with Microsoft Paint. Turato is masterful at ironically subverting canonical signifiers while fetishistically elevating detritus scavenged from the verges of the information superhighway. This show reminds one of William S. Burroughs’s notion that language can contain parasitic entities that rely upon unwitting human hosts to make possible their perpetual replication. But what makes this work particularly compelling is the ambiguity surrounding who – or what – is in control of authorship and where the artist’s subjectivity truly lies.