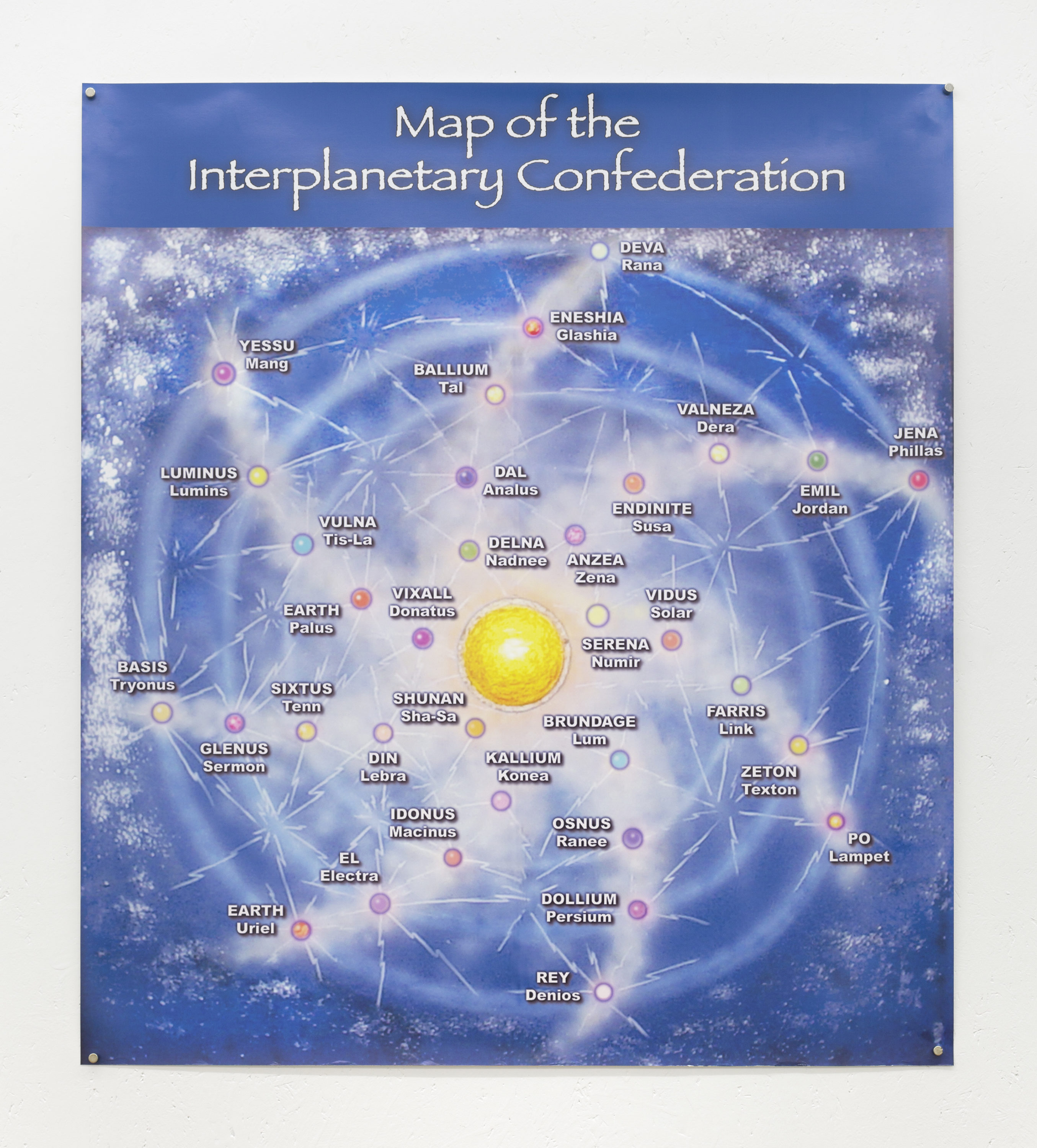 Throughout much of the twentieth-century, the conquest of space was seen as the epitome of human potential. During the years of the Space Race (c. 1955-75) in particular, spaceflight and exploration symbolised the geopolitical prowess of the superpowers. As Eastern and Western blocs competed to outdo each other, the boundaries between “real world” technological advancements and images gleaned from science fiction became blurred. Government-led space programmes proved a potent form of propaganda, fuelling fantasies about the colonisation of other planets and extra-terrestrial life.

Since the end of the Second Cold War (1979–1985), however, the idealism once surrounding space exploration has given way to the widespread acknowledgement that it is solely motivated by military and mercenary aims. Yet while exploration of the celestial realms may no longer be imbued with a sense of romantic possibility, it remains a source of infinite conjecture, as does the possibility of extra-terrestrial life. This is demonstrated by the recent resurgence of theories such as the panspermia hypothesis, which posits that life on earth was “transmitted” from outer space via spores or bacteria carried on meteors. Alongside these theories, organisations such as the U.S military have been releasing information that many involved in UFO communities believe constitutes a tacit disclosure of alien visitation.

Responding to these developments, ‘The Institute of Cosmic Superimposition’ brings together artworks and texts by several contributors unified by a fascination with the cosmological. All exhibit a desire to explore ways of mapping outer space, speculating on what might be out there. The drawings and monotypes of Amélie Bouvier evoke aerial views, outer-space imagery and heavenly bodies. Bouvier is influenced by a diverse array of sources including Google Sky, nineteenth-century century photo-plates and NASA surveillance images. Yet while the graphic and schematic language used to compose these works originates from scientific images, her work always bears the trace of the human hand and the laborious manual processes involved. Bouvier describes her work as “stuck between reality and fiction”––which might equally be applied to the drawings of David W. Chace. In the mid 1990s Chace began actively seeking out UFO abductees, speaking to them and working with them to draw the alien beings that they described. Chace’s drawings are almost forensic in their aesthetic and are accompanied by handwritten notes that often elaborate upon his interviewees’ abduction experiences. The drawings selected by Chace for this exhibition focus on entities referred to as ‘greys’ and ‘reptilians’––just two of the many ‘species’ depicted in his work.

The entities depicted in Chace’s drawings would not look out of place in the otherworldly landscape featured in Matthew C. Wilson’s film Geological Evidences. Shot entirely in infrared and drawing upon the genres of science-fiction and documentary, Wilson’s work touches on the current uncertainty regarding the future of human life in the face of climate change. On one level, the film’s haunting landscape clearly evokes cinematic depictions of planets such as Mars. At the same time, though, it might also refer to the contemporary moment as seen through non-human eyes, or a post-apocalyptic world. Geological Evidences was filmed in Schöningen, Germany, in and around an archaeological excavation where Wilson discovered the fossilised object that is also displayed in this exhibition.

This exhibition was shaped significantly by conversations with several members of the Unarius organisation, otherwise known as the Unarius Academy of Science. Since its foundation in 1954, Unarius has collected scientific information which, it believes, proves the reality of life existing on other planets. Unariuns assert that contact with these extra-terrestrials––who they refer to as ‘space brothers and sisters’––will result in positive global changes. According to Unarius, these advanced beings live as a brotherhood of humanity, serving as examples of ‘love in action’ and demonstrating how to live in peace and harmony. Unariuns believe that there are thirty-three life-bearing planets in the galaxy that will eventually form an alliance called the Interplanetary Confederation. This exhibition features their map of this Interplanetary Confederation, along with a selection of literature that elaborates on their mission. The material contributed by Unarius –who describe their philosophy as a spiritual science –lends a distinctly optimistic note to this exhibition, underscoring the fact that some continue to view space as a source of visionary possibility and utopian potential. 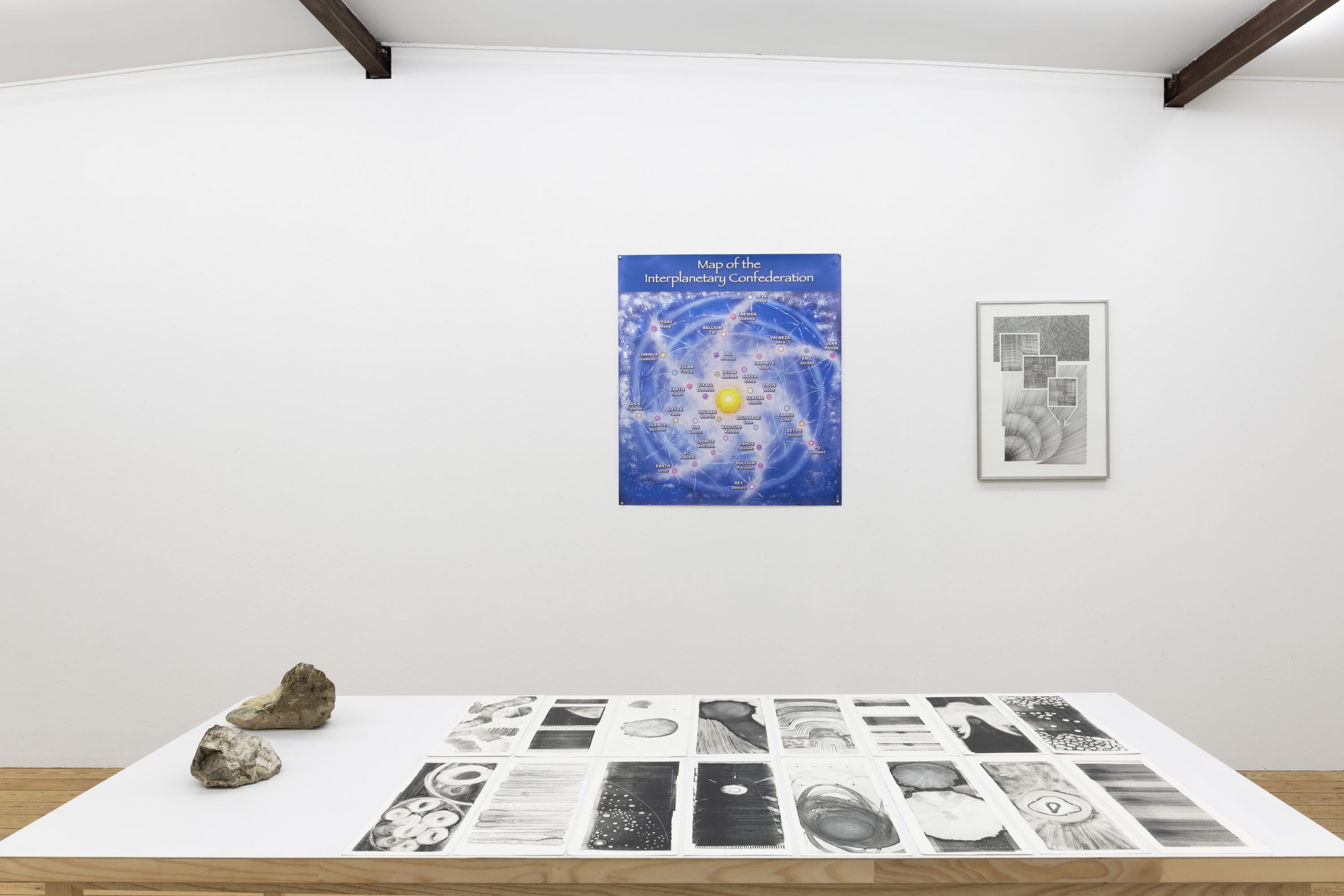