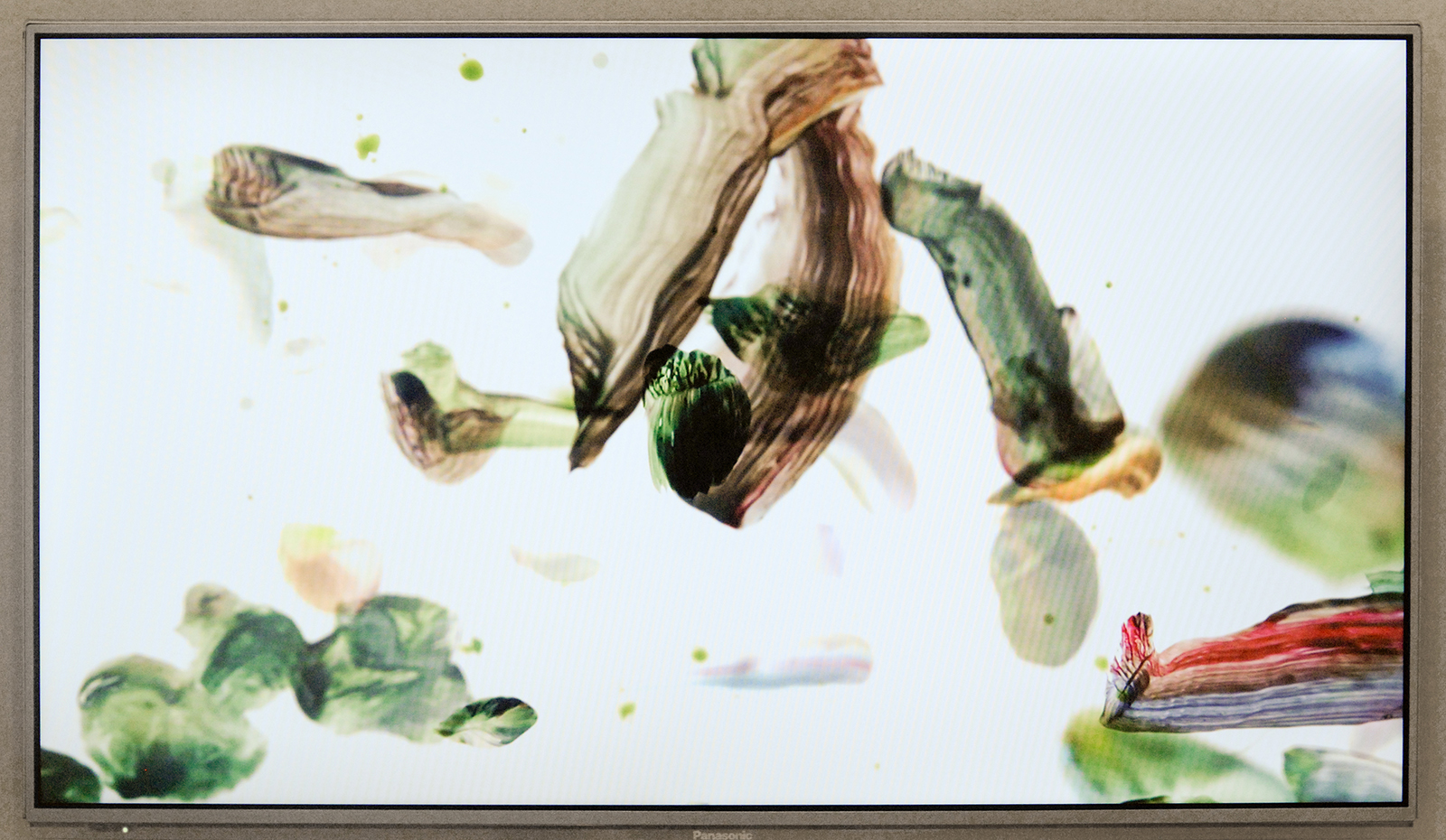 I hope this finds you in good spirits. It’s early on Monday morning and grey light fills my room here in Den Haag. I’m imagining you are now reading this in your North Facing studio overlooking Kakeberg. Apart from a few street lamps and traffic barriers Kakeberg is one of those cobbled lanes in Maastricht which possesses a character that is distinctly medieval. No doubt your studio has changed considerably since my last visit, I recall how then numerous artworks were placed around the room, propped carefully against the walls, facing inwards. Some of those paintings I viewed that day are still vivid in my mind. I recall how they appeared initially as landscapes but were revealed themselves on closer inspection to be film or theatre sets; artificial interiors devised for a performance or photo shoot. However, the work that has preoccupied me most since my visit to your studio is the work entitled Rehearsals.

Deliberating on this work -which it has be said constitutes a significant departure from the work you’ve previously produced- has led me down several avenues. While some of these may seem to be connected to your work only tangentially I believe that they will expand some of the thought around your piece in ways that I hope will be significant. Since leaving Van Eyck I’ve given much thought to how one’s time there can have such a significant impact upon one’s work. Almost every individual I’ve met who has spent a period working there has been significantly affected by the experience. It may be that my background as an art historian is at the root of my propensity to forge connections between an artist’s work and the context in which they are working. Whatever the cause, I’ve been considering some of the ways that working at Van Eyck might have impacted upon and shaped the works that you’ve produced while there. The soundscape of Rehearsals is a key element of the piece. It’s prominence in the work reminded me of the fact that on any given day musical emanations drift from the Conservatorium and echo through the space in which you are working. Whether it be vocal exercises, the tuning of strings or -as I recall most vividly- the distinct low drone of a contrabass tuba, there is almost always some sound drifting across Academieplein and echoing through Van Eyck. I’ve been wondering if perhaps working next to the Academy of Music might have been an influence upon the work; could the layering of sound and vision that distinguishes this new piece be viewed as a direct response to the unique environment in which you are currently working?

It occurred to me while thinking about Rehearsals that although it is not actually executed in paint per se, it is ultimately is a reflection upon the process, history and potential of paint as an artistic medium. On the most fundamental level the work explores what painting is: the act of making marks on a surface to create form, image, shape and even atmosphere. Viewing Rehearsals, one navigates through a constellation of brushstrokes that resemble the types of marks an artist might make in the act of warming up to paint in earnest. Every dash, line and curlicue might be seen as an exercise in brush-handling, made by one readying their muscles and nerves for the future act. However, in addition to resembling marks made in preparation for a honed future action some these accumulations of paint also bring to mind a number of specific episodes from the history of Western Art. We discussed how the palette in some of the accumulations -and indeed the title- are evocative of Degas’ series from the 18__ depicting young dancers in various poses of rehearsing. However, what the appearance of this new work -and indeed the way it was produced by applying paint directly onto sheets of transparent Mylar- reminds me of most are the works of Len Lye or Stan Brakhage, artists who painted onto film directly. There is a synaesthetic dimensions to the work that Brakhage’s developed over the course of his lengthy career and demonstrated through his film practice. Indeed this synaesthesiac element of Brakhages’s (abstract) also comes to mind when one is viewing Rehearsals. This quote by Breakage seems particularly pertinent to your new work, Imagine an eye unruled by man-made laws of perspective, an eye unprejudiced by compositional logic, an eye which does not respond to the name of everything but which must know each object encountered in life through an adventure of perception .

Although Brakhage’s work is usually situated within the realms of experimental film one his approach to using materials might also be seen as rooted in an that first flourished amongst painters in the 1950s many of whom have been come to be known (I feel rather reductively) as Abstract Expressionists. In this way Brakhage’s work might be seen as a bridges between the visual preoccupations of experimental film makers and those of High Modernist artists whose paintings were distinguished by their decision to use techniques of mark making which are ultimately an index of their physical actions. This approach emphasised more than had previously been made the connection between an artist’s physicality and the paintings that they made. Marks made come to constitute the sole ‘subject’ of It is these webs of visual connection that reminded me whilst watching Rehearsals of that -now iconic- footage of Jackson Pollock by Hans Namuth filmed in 1950. In this footage Pollock paints directly onto glass as a means of demonstrating his technique, his actions seem exaggerated and almost performative.

Rehearsals from stefan peters on Vimeo.

Yet this footage evinces more succinctly than any of Pollock’s paintings ever could Harold Rosenberg’s assertion that what was to go on the canvas was not a picture but an event. The marks that constitute the subject of Rehearsals can also be likened to Pollock’s works to some extent in that in when viewing Rehearsals ones eye are caught in what seems to be an impossible impasse: the strokes or pours of paint push and pull upon one’s eyes. It becomes difficult to know whether we are gazing onto boundless unlimited and infinite space, or are we peering into claustrophobically constraining, sealed and hermetic compartments from which nothing can leak? Indeed, watching Rehearsals one is prompted to ask if we can, simultaneously, do both? There are numerous aspects distinguishing Rehearsals from the work you’ve previously produced. Rehearsals is of course lens-based and characterised by a perpetual mobility that introduces a phenomenological aspect to the work. The screen becomes a portal via which one navigates through diaphanous forms the transparent nature of which emphasise the solidity of the world in which we -the viewers- inhabit. Yet, despite these differences the new work shares with your previous paintings a distinctly cinematic aesthetic. While the paintings I viewed in your studio possess a directly ‘narrative’ content and were more ‘psychological’ in terms of the symbolism and interiors depicted they share with this new work the evocation of cinematic scenes. Or perhaps, to be more precise, the images you produce evoke in my mind scenes viewed in films. Rehearsals instantly summoned cinematic representations of deep space from science fiction movies. In particular, Rehearsals evokes the Star Gate scene at Kubrick’s 2001 Space Odyssey in which streams of psychedelic light stream in infinite planes of exposure. This atmosphere is significantly heightened by the via your intense drone like soundtrack which is such an important feature of this work. Indeed, imagining an aimless drift through limitless space evokes within me the same metaphysical intensity generated by Pollock’s works which, packed and agitated as they are, ultimately function as investigations into the sublime. The line that I have drawn (by way of your new work) to connect the paintings of Jackson Pollock to images that have come to us via science fiction movies may seem somewhat tenuous.

However, drawing such a line emphasises the inherent duality of Rehearsals which is on one hand focuses upon the particoloured constellation of gestural brushstrokes and on another hand the intervals, voids and the SPACES that separate them and through which we travel. Space -and of course time- play a role in this work in a way that couldn’t have been possible your previous works which were for the most part static paintings. Your decision to paint directly onto Mylar has led me to draw yet another connection to space exploration. However, this connection has emerged as a result of the materials utilised as opposed to aesthetic outcomes. Did you know that in 1968 -the same year Kubrick’s pioneering 2001 was released- one of many experimental spacecraft entitled sateloons (spherical satellite balloons) was sent into orbit? These sateloons were made from Mylar, the same material that’s been a key element in the production of your Rehearsals. The slow drift one makes when viewing your new work certainly echoes the idea of a Mylar balloon floating slowly -perhaps even aimlessly- through Space, reflecting signals back and forth.

Yet, while the Rehearsal seems on one hand to refer to outer space (which I imagine must be a dark and frightening place) it could equally be described as a representations of an interior psychological state as opposed to an objectified, externalized, space. What might be termed an what might be termed inscapes. This term, inscape, is one I recently encountered in the work of English poet and priest, Gerard Manley Hopkins. His poetry concentrates upon the concept of inner-dwelling-ness which I believe is a key concept to grasp when thinking about the work of visual artists whose vocabulary often doesn’t engage with the external or material world. Perhaps to engaging with the inscape of personal expression can paradoxically also bring us closer to what the existential immediacy of the cosmos as it presents itself to us, and our participation within it. For it’s on been suggested that there are direct analogies between the microcosm and macrocosm: that old maxim as above so below comes to mind here. I don’t believe there is any way to successfully evaluate the outcome of an individual’s artistic expression through the use of the written word. However, I do think that analogy can be an effective way to respond to a work and that exploring ideas and events that may seem only tangentially related can introduce new meanings. If I am to address Rehearsals directly, without analogies; I would have to say that this work is one which addresses the permanence of painting. Rehearsals is a meditation upon the capacity of paint to endure physical time as well as the fads of style and the perennial pointless exclamation that painting is dead. But Rehearsals also evinces an important point concerning the evolution of video art during the five decades that it has existed as a medium. That is that of the countless permutations in video one of the most interesting is the way that it has developed relationships with other mediums, in this instance painting. I’m interested to know your thoughts on some of these ideas and look forward to your response. Hope to make it to the show in Galerie Van De Weghe. Looking forward to engaging with The Gravity of Painting!