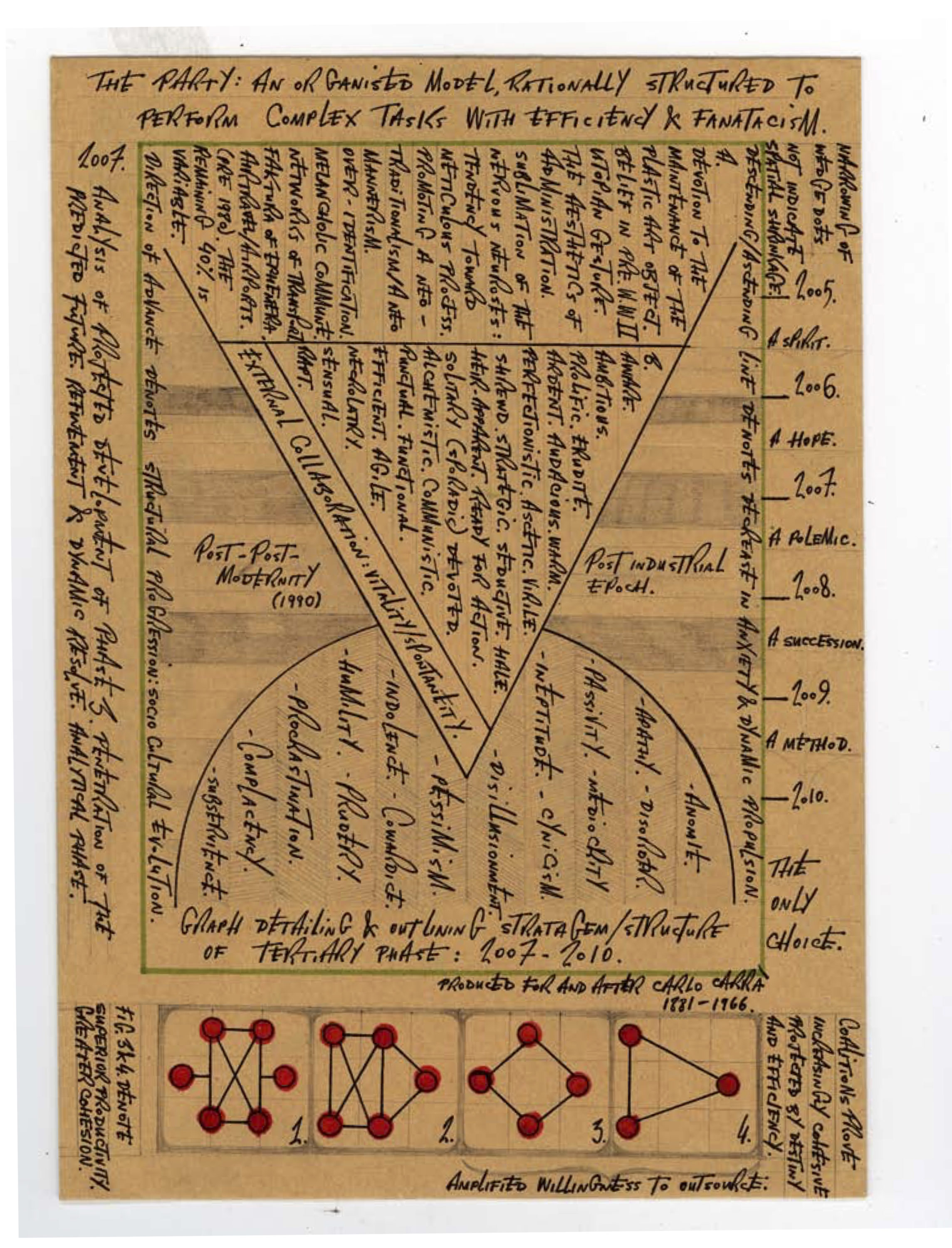 Printed Project is the journal published by Visual Artists Ireland from 2003 to 2010. Printed Project was a collaboration amongst artists, critics and curators, writers and readers devoted to making sense of contemporary art and culture. Printed Project was published twice a year and edited on a rotating basis by invited curatorial editors. Each publication gathers and presents thought and opinion on issues and arguments that enliven dialogue and debate on art and the wider culture of our present day. With Printed Project, Visual Artists Ireland set out to meet the need felt within an expanding art industry for a not-for-entertainment art publication. Simple and modest in design and production the journal brings the best of comprehensive thought to bear on present art practices and on the shared consequences artists and audiences face as our culture backs into the future.

If the period of frenzied development extending from the late 1890s to the mid-20th century was characterised by its tendency toward an optimistic -even blind faith in progress, then it seems undeniable that, since the late 1960’s, that tendency has,for the most part, been inverted. The ongoing process of disenchantment which accelerated in the wake of WWII has resulted in the irrevocable nullification and denunciation of much of that which preceded it. Even the initially fertile, vital and critical counter movement,which emerged from the ashes of the Modernist project in the late 20th century and was characterised by a tendency to review and critique that which went before, has become dominant and therefore moribund. In the immediate present the very notion of progress is rendered problematic, possibly even redundant, by the fact that we inhabit a state in which all reference points determining quality, authenticity, value ,even meaning have become unintelligible.

In the present there proliferates a condition of devolution whereby “democratic” discourse in all fields of culture and communication media has become de rigueur. Paradoxically, however, the result is a stultifying stasis, congested with information, from which “Utopian gestures” have inevitably been eroded. Tangible Action has given way to unrelenting directionless dialogue, while the exponential progression of alteration in perceptions of space and time seduces many into becoming static subjects to facile, systematic diversion. The time for major idealistic projects and common idioms has ended, and in their place there prevails an arrogant nihilism and self-destructive fatalism. In this unstable, barbaric age it is all but impossible to envision a future other than one which is bleak and doom-laden. To see the alternative, one must be willing to plunge back into the world of “will and illusion” and propel oneself onwards with these as defence, and as destination.

While intimately aware of the dangers of pre-WWII stereotypes and the perils of art-as-drug, we of the Party embody a vitality of spirit which empowers us to surge fervently forward into a brighter “future” (or at least sublimate anxieties and render the present liveable via processes of conceptualisation and production). Idealistic and delusional we may be, but there can be no dispute that an aspirational and enraptured present is infinitely preferable to capitulation to mediocre complacency.

United by our convictions, we believe it our duty to work tirelessly at realising our personal goals while actively assisting in the endeavours of our comrades. Embracing a disciplined, devoted, sometimes symbiotic work ethic, we strive to excavate and enhance ourselves, each other and – ultimately – this shared reality which we inhabit. Though we have no desire to turn back the tide of time to reside in a fantasy of the past, it seems that we must partially avert our awareness of certain defining facets of the zeitgeist in order to concentrate exclusively upon devising a schema that bestows meaning and purpose upon life.

Though undoubtedly unified by certain preoccupations,tendencies and technical approaches, our “togetherness” is not manifest merely in the production of an art that is stylistically unified . What fundamentally binds us and characterises us, is an ardent faith in cultural production and constructive communication, not simply as a means of self-improvement and sustenance, but as strategies of survival. There is no choice for us other than to create. The advantages granted to us by our plurality ensure the desperation we endure as individuals can be assuaged as our courage and competency are reconsolidated and revitalised by our Party comrades. In our “togetherness” we prove that cultural consensus need not mean surrender.

Overpowering social forces, inherited hangovers, seductive external distractions (and the knowing trapdoor to oblivion which they offer) more than ever before make the expression and preservation of one’s autonomy extremely challenging. The “space” seized and the ideology promulgated by the Party counters this trend by generating a nourishing and altruistic milieu in which the individual is equipped with vital methods necessary for idiosyncratic living.

Though Party inclusion requires essential devotion to a unifying attitude, each of us exists as individuals independent from the Party. It is through the following methods that this cohesive, productive Heterotopian milieu is maintained:

The rigour and rules, the systems of logic, the order and control which characterise the Party are a reaction to the flattening, deadening and marginalising phenomena which are experienced daily. We create a technique of life that ensures our individual qualities are not only preserved but nurtured, strengthened and elevated. In all aspects of cultural production an elaborate bricolage is constructed, expressing an aspiration to achieve unanimous and individual ambitions which contribute to an alchemistic transfiguration of the quotidian.

The process of maturation which the Party has undergone before arriving at its current streamlined state , in combination with countless historical precedents , has confirmed to us the truism that cultural production under a unified sign is always destined to be riven with conflict. The semblance of harmony within the Party in its prior configuration(s) was short-lived as ego, emotion, weakness and even deceit made for a fraught working dynamic. The partition from those favouring a less determined mode was inevitable, and the consequence of their departure has been the emergence of a superior Party – galvanised and steadfast. In addition, our strategy of sporadically enlisting contribution from external practitioners ensures continual fertilisation, safeguarding against the threats of stagnation and eventual expiration.

This evolution confirms that we exist permanently in a burgeoning, nascent state. Here we are, the babes of a New Dawn, fresh to it and entering bravely into the Three Year Plan which marks the Third Phase of the Party’s progress. Emerging from the past, the Party exists in the present and for the future. We are united not because we wish to fulminate against master narratives or to extricate ourselves from an aesthetic lineage .Nor do we assume an anti-establishment or “alternative” role. On the contrary, we are inquisitive explorers and generators of history; we are both an establishment and an institution. To all of you who grasp our essence and share our intent, we send fond salutations. To all those who have assisted – and continue to assist – in our Mission, we send earnest and heartfelt gratitude!