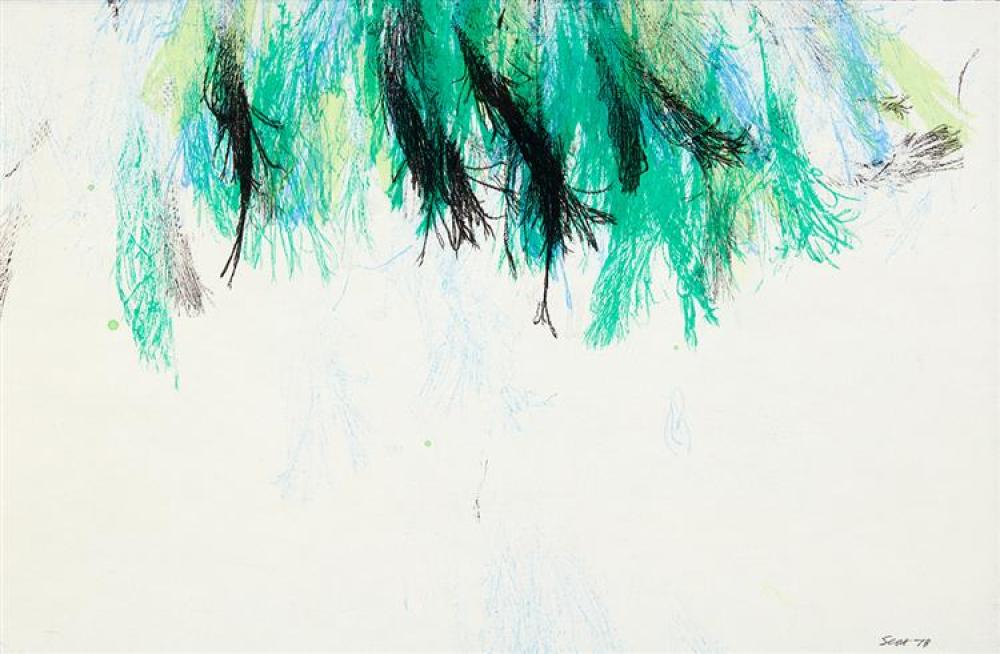 Published on the bittersweet occasion of Patrick Scott: Image Space Light at IMMA and VISUAL, Carlow.

I hope this finds you well. I’ve intended to write to you for some time to convey my gratitude for your work, which I’ve greatly admired since first encountering it as a teenager. I have gleaned so much pleasure from it in the interim years and it has become something of a touchstone for me. The great corpus you have produced is –of course – comprised of different facets and phases. One group I find particularly intriguing are your Gestural Drawings which, in comparison to other works you have generated such as the Gold Paintings, seem to have received little critical attention.

I acquired one of those drawings several years ago. Time spent with it has sharpened my perception to the fact that the qualities it possesses differ significantly from the works you’ve become most synonymous with. For while there is a rich diversity to the tapestries, paintings and prints you have produced, your oeuvre is ultimately unified by an aesthetic of controlled restraint: harmony achieved through organic geometry and elegant simplicity. One suspects that this simplicity must be the articulation of mathematical design arrived at through prolonged consideration. It is evident from just looking at all that you’ve produced

in recent decades that it necessitated meticulous and meditative techniques. In contrast, the Gestural Drawings appear to be the outcome of spontaneous and impulsive actions. Their wild, almost expressionistic appearance leads one to imagine that producing them required a surrendering of control. I’ve made efforts to learn more about the genesis of these drawings. In so doing I was once informed that their execution entailed whipping ink onto paper using a ‘wand’ made from fabric fastened to a cane. In this respect the drawings can be connected to works you made in the 1960s. I’m referring to the Device series and pieces such as Quiet Morning and Still Water which have been described as belonging to a kind of post-painterly abstraction. Those beautiful works could be described as ‘process paintings’ in that you made them through dripping and splashing tempera directly onto saturated canvas. They emerged from a transient phase in your career where you utilised technical automatism to truly exquisite ends. As time moved on, it seems you eschewed that element of chance and one would assume you had eliminated it entirely – were it not for the Gestural Drawings.

Unlike your more formal and rationally composed works, the Gestural Drawings demand to be considered in terms of the circumstances in which they were made. They are recordings in ink and paper of some ludic and uninhibited ritual. They call attention to themselves as documentations of physical movement. In my efforts to find out how and where these works were made I discovered that you produced them intermittently over a period of many years in a remote house in the sanctuary of the Wicklow hills. This idea – that you made these works only while away from that city studio from which your most seminal and celebrated works have emerged – is fascinating. There is, perhaps, an implication that the act of producing them afforded you some sort of release during a period of your career that I imagine was particularly frenetic and occupied with all-consuming endeavours. Perhaps making these works provided a rare opportunity to abandon yourself in cathartic action whose visual results could not be predicted?

This idea interests me for many reasons, not least because it evokes the practices of André Masson and several others affiliated with Surrealism in the 1920s. For them, automatism was a catalyst which they believed would revivify modern art while abnegating academic convention. They embraced manual techniques involving chance to produce abstract forms that became a stimulus for imaginative interpretation. Similarly, it would appear that the random marks made from your gestural actions became a starting point for compositions that have representational elements. I’m thinking of those drawings in which you modify the marks to produce forms suggestive of landscapes, cloud and coral reefs.

I recently read a review of an exhibition you had in the 1980s in which the critic quoted you as saying ‘I never know why I do what I do’. I imagine this ambiguity stems from a desire for people to interpret the works for themselves. Yet, while I admire that you’ve remained reticent in discussing your practice throughout your career, I am also intrigued by your intentions in producing these drawings. I am curious to know whether the sporadic use of objective chance throughout your career was motivated by conceptual or aesthetic convictions or simply a desire to enjoy the fruits of experimentation.

My attraction to your work is deeply intuitive and I know the pleasure I take from it shouldn’t be intellectualised. However, the art historian in me is compelled to better understand some of the factors behind the making of these drawings which have, I believe, been overlooked. You are one of the first Irish artists to have fully embraced abstraction and formulated your own unique vocabulary. Since the 1940s that visual vocabulary has re- mained a challenge to lazy habits of thought, to tired senses, uneasy minds and complacency of vision. I’m thankful for this. I do hope that someday I might have an opportunity to discuss all this with you in person. In deepest appreciation,