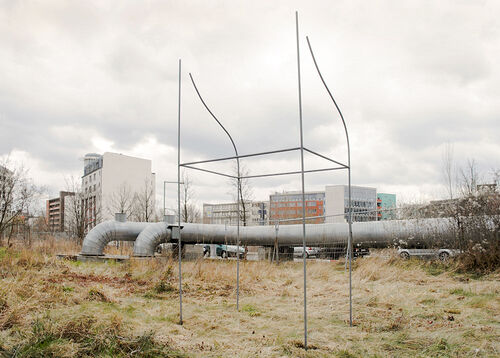 …in relation to Grey luminous light from the sea (A Structure for Readings), 2008.

An ongoing recognition, collection, and dissemination of other people’s words: this night event shall be an exercise in permutations and a pollination of ideas airing themselves through the lines, drudge, and history of the Skulpturenpark Berlin Zentrum and its edges. Some preliminary words: “This business of symbols is rather confusing. I am not, I think, a symbolic writer in any allegorical or complete sense. Symbols come in, perhaps more in some novels than in others. I would want them to come in a completely natural way, through the characters. That is, being a symbol maker is not a kind of odd thing which artists are, it’s something which everyone is. One notices in any kind of family situation or love affair, people invent symbols, all sorts of things become symbolic. This kind of patternmaking, although it may be connected with art in some genetic way, is not just an effect of art; it is something one spots if one looks around at human beings.”

(Iris Murdoch on symbols, from an interview with William Kent Rose in A Tiny Corner in the House of Fiction: Conversations with Iris Murdoch [University of South Carolina Press, 2003]). 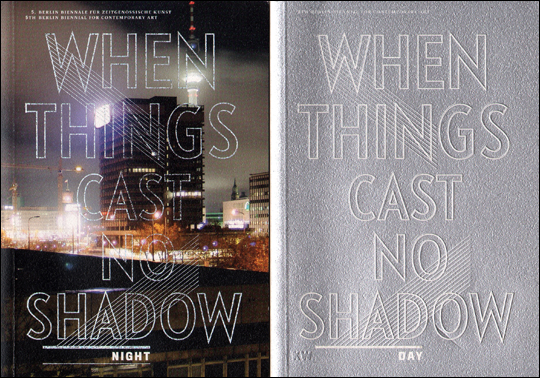 The exhibition When things cast no shadow consisted of two parts; one taking place by day, one by night. The daytime part of the 5th Berlin Biennale presented mainly new productions by 50 artists of four generations shown at four different venues—at the KW Institute for Contemporary Art, the Neue Nationalgalerie, the Skulpturenpark Berlin_Zentrum and the Schinkel Pavilion. Many of the participating artists conceptualized and built their commissioned artworks explicitly in response to the specifically designated exhibition site. Already a few weeks prior to the official opening the first in a series of five solo exhibitions (curated by artists participating in the biennial) was launched at the Schinkel Pavilion as part of the 5th Berlin Biennale. Throughout the duration of the biennial these exhibitions gave insights into ways in which younger artists deal with topics such as the legacy of previous generations, modernity or various exhibition formats.

With the title Mes nuits sonts plus belles que vos jours (My nights are more beautiful than your days), the night program consisted of a total of 63 evening events. The biennial program was thus extended by 100 additional artists and cultural producers who were involved in the lectures, talks, performances, concerts, workshops, film and video screenings and other types of events at various locations throughout the whole city. Curators Ada, Szymczyk and Elena Filipovic envisioned the night program as an “exhibition which, for the duration of the biennale, would be in the process of becoming”. With a focus on revisioning already existing artworks or creating entirely new work, the team of curators thus offered participating artists and thinkers from a variety of fields a possibility to experiment and improvise beyond the spatial and temporal boundaries of the gallery.