Back to the Cave 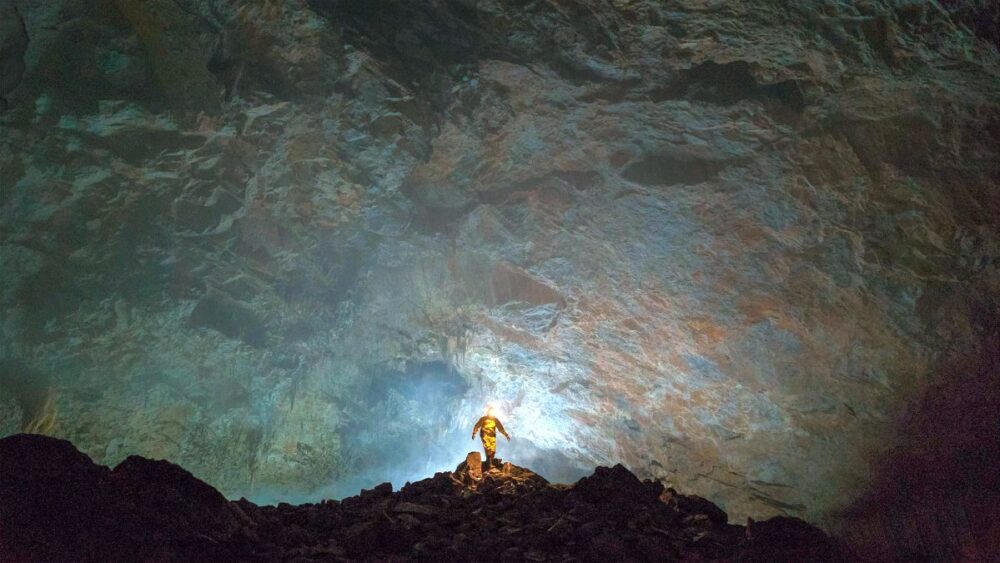 Long before galleries reopened and I emerged from lockdown Part I to view exhibitions, I realised that was interpreting everything through the lens of pandemia. Suddenly, works of art, conceived long before anyone had even heard of Covid-19, seemed prophetic of the strangeness of our plague-ridden present. One such work is Melvin Moti’s Dreamlife, the Dutch artists most recent film and his first foray into feature-length territory. Like several of Moti’s previous works, Dreamlife weaves together factual and fictional strands to explore consciousness, perception and time, preoccupations that run throughout Moti’s oeuvre.

The central narrative of Dreamlife focuses upon the character of Emile, who has undertaken a human isolation experiment in a subterranean cave where he is to encounter no external stimulus for a prolonged period. This character -and his endeavours- are based directly upon Michel Siffre (b. 1939) the French speleologist who in the early 1960s began carrying out a series of increasingly extreme  underground  isolation experiments. Living in darkness for extended periods  without access to clocks or other time keeping devices Siffre sought to establish how the circadian rhythms of the body recalibrated and whether or not one was capable of measuring night and day. Siffre’s most ambitious experiment came in 1972 when he spent six months in a Texas cave and in doing so established that his body transitioned dramatically to a 48-hour sleep-wake cycle. Serendipitously for Moti, Siffre was back in the news just a few weeks after Dramlife had its debut screening (at the Rotterdam film festival) as numerous journalists contacted him to ask if he had any advice for how best one could adapt emotionally and physically to extended  periods of isolation and monotony.

Although Siffre’s example informed this film it is ultimately a far broader essayistic expiration of a variety of themes. For this feature Moti changes Siffre’s name and  conflates a number of Siffre’s experiments, amalgamating several of the particularly intense experiences. One of the notable aspects of this film is the extent to which the register shifts. Indeed, several facets of Dreamlife have a tone that evokes a 1970s educational video. This is particularly the case in those sections featuring the animated mouse named Gerry, who is in many ways at the centre of the film. Moti’s creation of this character is inspired by an anecdote recalled by Siffre of an experience he had during a particularly arduous experiment in Texas in 1972 when in a desperate bid for some form of companionship he attempted to befriend a mouse. Due to a mishap Siffre accidentally crushed his companion to be and fell into existential despair and considered suicide, such was the extent of his mental state. In Dreamlife, Moti casts this mouse in the role as a zen master, spirit animal who is evidently well versed in the ins and outs of consciousness raising exercises and who informs his companion and by extension we the viewers that Most of the elements that make up the human body were formed in stars and we humans are therefore  93% stardust. 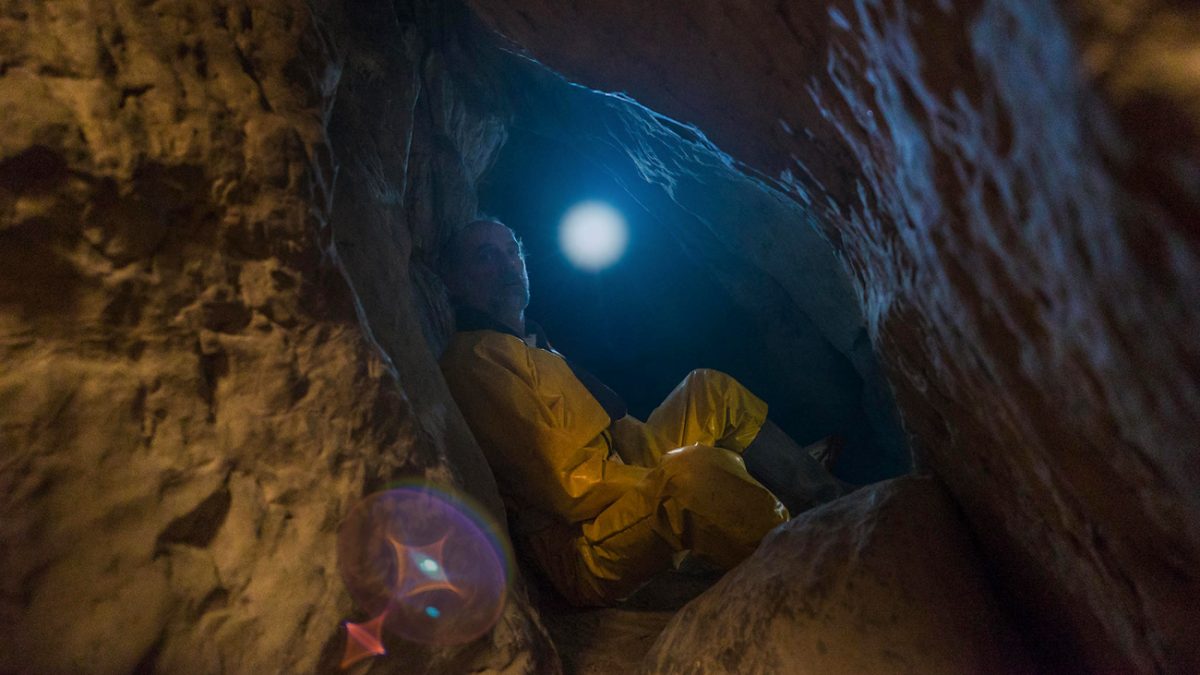 I was reminded of a number of moments from the history of cinema whilst viewing Dreamlife. The sparse laboratory where Emile drifts in and out of consciousness evokes sets from 1960s sci-fi movies set in space. This is entirely apposite, for as Moti points out,  Siffre’s experiments took place at the same time as many of the most significant moments of the space race were  occurring. There are of course many parallels between Siffre’s experience of underground isolation and those of astronauts/cosmonauts as highlighted by the fact that Siffre’s findings were analysed by NASA. Dreamlife is also evocative of Werner Herzog’s 2010 film, Cave of Forgotten Dreams about the Chauvet Cave in southern France containing some of the oldest cave paintings ever discovered. Like Herzog’s film, Dreamlife is essentially a rumination upon the eternal and complicated we humans have had with caves. For as the mythology of almost every culture underscores, caves are sites where life and death, creation and destruction, are simultaneously present. Zeus was born in a cave, while life is also terminated in them, as exemplified by the cavern deities mentioned in the Egyptian Book of the Dead. These chthonic zones are seen as gateways to an underworld where communication can be made with supernatural beings. Because of this, subterranean caves were often used as sites for initiation rites, worship, and divine revelation. However,  it was not only ancient cultures that utilised caves as sites of self-discovery and cosmic speculation. Even in the twentieth century the cave was a place in which science and psychology learned about the human, as the experiments of Siffre.

The central themes of Dreamlife were explored previously by Moti in his 2008 film The Prisoner’s Cinema. This film -shot on 35 mm film- focuses upon and depicts a phenomenon that occurs when one is deprived of light and visual stimulus for long periods of time.  In response to this absence the brain generates visuals that can appear so real that they are often mistaken for some form of supernatural phenomenon. While researching this film Moti first encountered the work of John C. Lilly (1915-2001) pioneering neuroscientist and psychonaut. Lilly’s renowned initially stemmed from his experiments using sensory deprivation tanks but he went on to become known for his later related research into ketamine or dolphin / human communication. Dreamlife and The Prisoner’s Cinema are two of the facets included in the solo show by Moti that opens in September at the De Pont Museum in Tilburg. 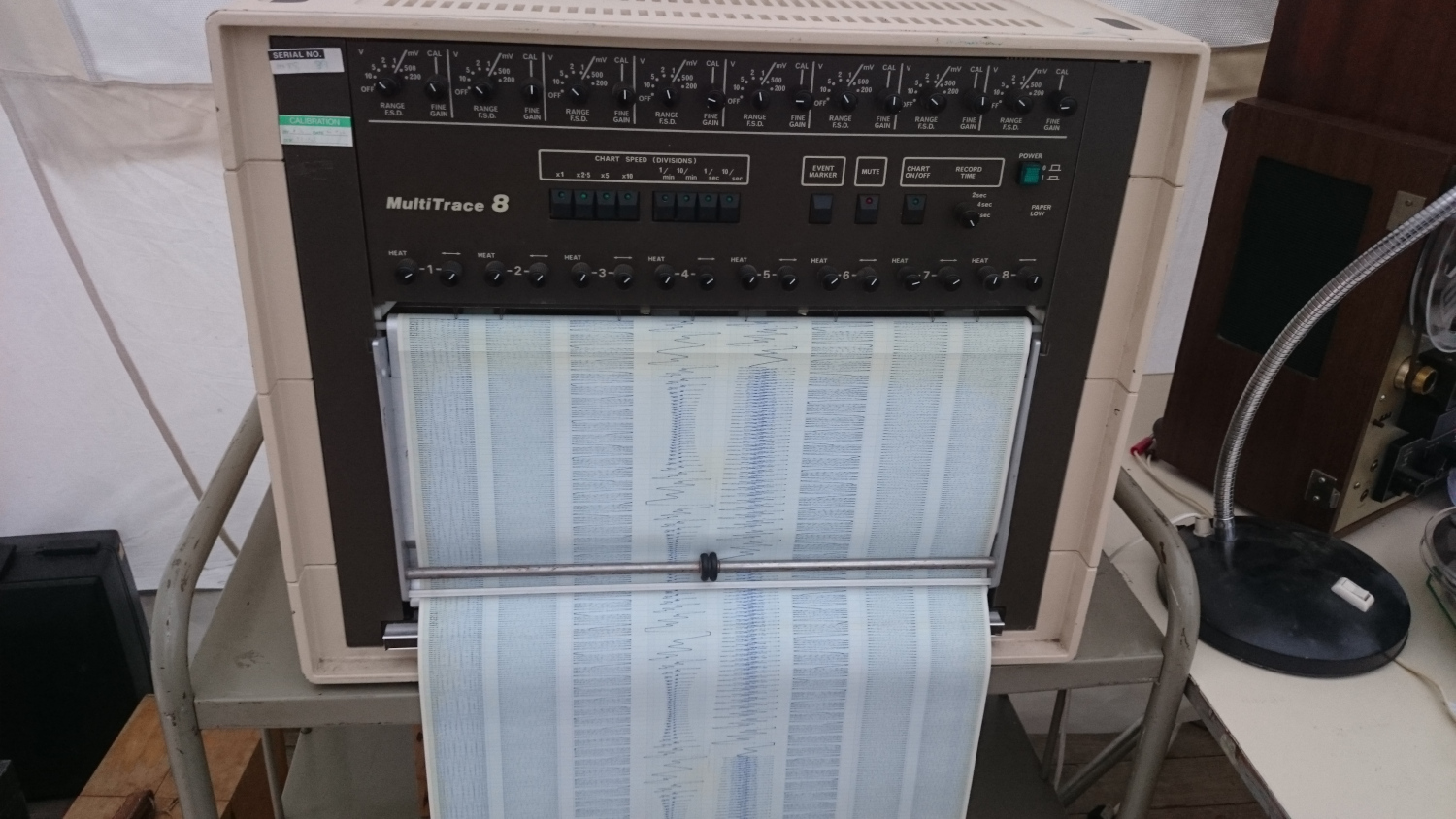 When I spoke to Moti about the exhibition via Skype back in mid-May we were still in the midst of Lockdown.  Although we skirted around the issue it was evident that the fundamental ideas of the show resonated with that plague ridden present in which so many of us have had to deal with the realities of confinement and isolation as external circumstances conspired to reduce the parameters of our worlds, encouraging us to explore the possibilities of interior life and inner space. In recent days the only news coverage relating to pandemia has been interrupted by the grim situation in the U.S. which will inevitably deteriorate. At the time of writing several cities are burning. A few days ago the U.S. president manically tweeted from his bunker under the White House Elon Musk’s company launched astronauts into space; the first time in history a commercial corporation carried humans into Earth’s orbit. Comparisons have been made to the late 1960s but I can’t help but feel that this analogy is flawed for there seems to have at least been hope and utopian spirit available in those years which is impossible to muster in this cyber capitalist hellscape that is the twenty-first century. The events of recent months have been anxiety inducing to say the least and have brought about a recalibration which although traumatic is probably both overdue and necessary. It remains to be seen what lies in store but it seems safe to say that nothing will ever be the same as it once was.

More than ever before the space created by art has become an necessary refuge and zone of togetherness, the importance of which will probably need to be defended more than ever in the coming years. The rhythm and tone of these films by Moti, combined with the way that they are constructed suggest that they are intended almost as manifestations for more accelerated and meditative ways to exist.

For some psychologists, to dream of navigating a cave symbolises the desire to regress into the “womb of the earth mother”. This idea is problematised by feminist writer Luce Irigaray, who argues that, rather than escaping the cave ( à la Plato’s allegory), we should re-engage with.  For Irigaray, escape represents a willful forgetting and self erasure of our origins.  The characters in Moti’s Dreamlife provide us with examples that we would do well to follow; listen to the zen messages of cave mouse Gerry.  Perhaps even more valuable would be to dive into the work of those researchers that have informed Moti’s films and who he has pointed us towards. The psychological resilience and philosophical wisdom of figures such as  Siffre and Lilly is worthy of emulation.  fearlessness in exploring might help us to learn how to master the art of moving deeper inside our own consciousness;  to enter the darkness  of the void and learn how to see in the dark. The time has come for us all to overcome our fears of the things we cannot see and collectively climb back into the cave.