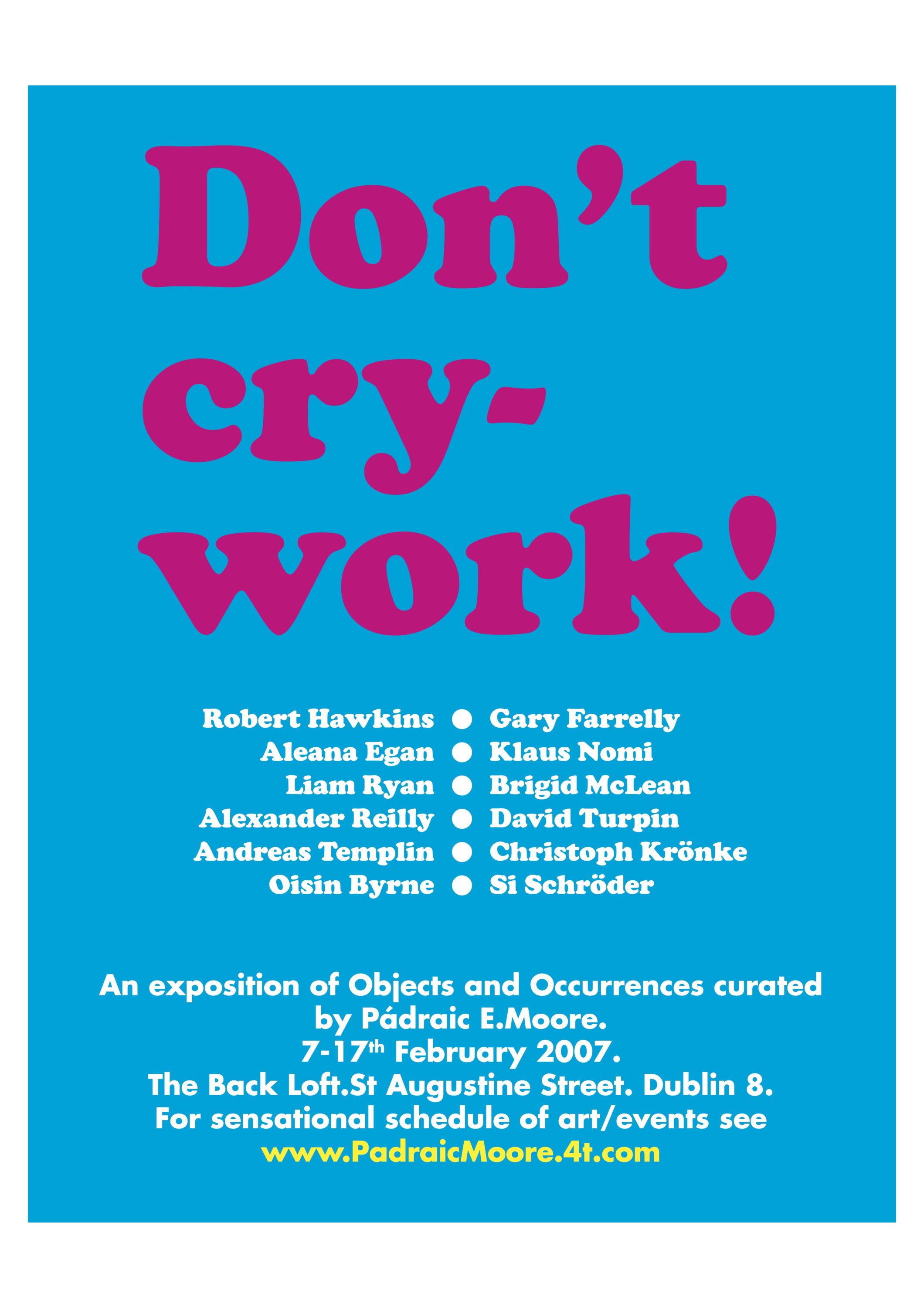 The format of this show consists of an exhibition featuring the work of 6 visual artists-Andreas Templin (Berlin), Robert Hawkins (N.Y.and London), Gary Farrelly (Dublin), Oisin Byrne (Dublin), Christoph Kronke (Berlin) and Liam Ryan (Cork). For the entire duration of the exhibition the work of these talented artists will provide a varied but thematically unified backdrop for a series of temporary events and performances from musicians, performance artists and filmmakers. (Temporary Exhibition of Sculptural Attire by Brigid McClean, Writings by Aleana Egan, A Musical Performance by David Turpin and the Irish Debut of “The Nomi Story” directed by Andy Horn.

The dialogue between the permanently installed artworks and the temporary events will encourage/invite the production of new interpretations & will also allow for prolonged enjoyment of the individual artworks. This coupling of permanent & temporary art forms constitutes a departure from the static dynamic of the conventional exhibition and highlights the commonalities between the different artforms and practices. Though Don’t Cry-Work! Is an exhibition evading a specific theme, it is an exhibition with a mission .In encapsulating and emphasising approaches, tendencies and attitudes manifest in varying measures and combinations in the work of the participants I seek to demonstrate how cultural production can provide constructive methods and alternative means to existing idiosyncratically within this often unsatisfactory, occasionally discouraging society.

Ultimately, this exhibition and all that it entails constitutes the construction of endless, ongoing possibilities, which allow the precious and precarious sense of optimism to persist and prevail. For some participants this exhibition is considered as a space for construction and production. For others it is the site of discursive contribution. For all of us it a platform for enthusiasm, experimentation and exhilaration!

The basis of Optimism is Sheer Terror [1]

Though Don’t Cry-Work! is an exhibition evading a specific theme, it is one with a mission. In encapsulating and emphasising approaches, tendencies and attitudes manifest in varying measures and combinations in the work of the participants, I seek to demonstrate how cultural production can provide constructive methods and alternative means to existing within this often unsatisfactory, discouraging society.

Riven with ugliness and destruction, the chaotic present seems lamentably distant from the harmonious ordered future envisaged in the designs of our antecedents[2]. The “timeless succession of shocks, interspaced with empty, paralysed intervals” contributes to a state of ambient omnipresent panic[3]. Consequently, the maintenance of tenuous order is sustained by an ersatz optimism reliant upon subtly extreme self-deception, disillusionment and suppression.

Inevitably for some, the sense of insecurity imbued  by this atmosphere leads to apathetic capitulation as one begins to doubt how decisions pertaining to aesthetic or creative concepts could feasibly be of any importance. However, it is during these episodes of dejection that the evanescent present must be seized and enhanced. Through cultural production strategies must be initiated which enable one to regain authority over one’s immediate circumstance while also contributing tangibly to the transformation of the here and now. In order to “extend the non-mediocre part of life[5]” and combat the advance of pessimism, commitment must be invested in the ignition of imaginative experimentation and inspired decisions. If one is to trust that concentrated activity can at least be utilised to alter one’s perception of a situation, vigorous faith is necessary.

Though I wouldn’t propose for a moment that this exhibition constitutes a critique of, or an alternative to, political or social hegemonic systems, it does expound examples of how some people exist more contentedly inside them[6]. Personally, a major stimulus, which paradoxically compels me to continue striving, is that dismal recurring realisation that I am merely a powerless, insignificant object of obscurely concealed networks of organised authorities. Combined with the neurotic necessity to continue the hunt for exhilaration, I am compelled to elude a sense of defeat and disorder by wholeheartedly devoting myself to converting an omnipresent sense of hysteria, urgency and angst into substance of quality and depth.

Though varied- and occassionally conflicting- the object based works in this show (and the practices which produced them) are signs denoting strategies of endurance developed by devoted and fixated practitioners[7]. Some are symptomatic of an attempt at sublimation via the repetitious production of meticulous art objects and concepts. The work of some practitioners also indicates that the time engaged in artistic labour is time spent inhabiting a state of perpetually upbeat imminence. Some works raise issues around how the quantity of time and labour invested in a work affect its value or perceived “aura” and why the necessary commodification of art remains a difficult issue.

Every one of the works functions as a proposition beckoning us to reconsider, review and challenge that which is accepted as the factual or the given.

This epoch is characterised – as is every epoch- by anxiety and uncertainty as to what the future holds. For this very reason much can be gained from devising structures and methods permitting one not to evade but to reform reality. Visible throughout this exhibition are manifestations of a habitual- in some cases neurotic-compulsion to actively devote oneself to transforming and “re-enchanting” the unpredictable present. This is evinced in both the individual components and the exhibition as a whole in that both are generated by an urgent “tendency to always do something; to survive, or at any rate- to live with a purpose”[8].

In varying degrees the work of the artists within this show divulges a generosity, honesty, as well as a curious tendency towards an exquisite use of prismatic colour that in some cases is almost excessively elaborate and in others is austerely spare. Ultimately, “Don’t Cry-Work!” demonstrates how a Productivist[9] approach can transform frustration and doubt into energy and opportunity through the prolific making of art.

Ultimately, this exhibition and all that it entails constitutes the construction of endless, ongoing possibilities, which allow the precious and precarious sense of optimism to persist and prevail. For some participants this exhibition is considered as a space for construction and production. For others it is the site of discursive contribution. For all of us it is a platform for enthusiasm, experimentation and exhilaration.

[3] This was written in the midst of World War 2 by Theodor W Adorno during his exile in the U.S. It appears in Minima Moralia-Reflections from a Damaged Life, (first published in German in 1951) London, Verso, 1984,

[4] Guy Debord, Toward a Situationist International

[5] As communication, consumerism and life itself become increasingly observed and recorded, there seem fewer areas where spontaneous undefined activity can take place. For the most part artistic practice is intrinsically and necessarily uncertain-the entire process being an undecided passage from nothing to something.