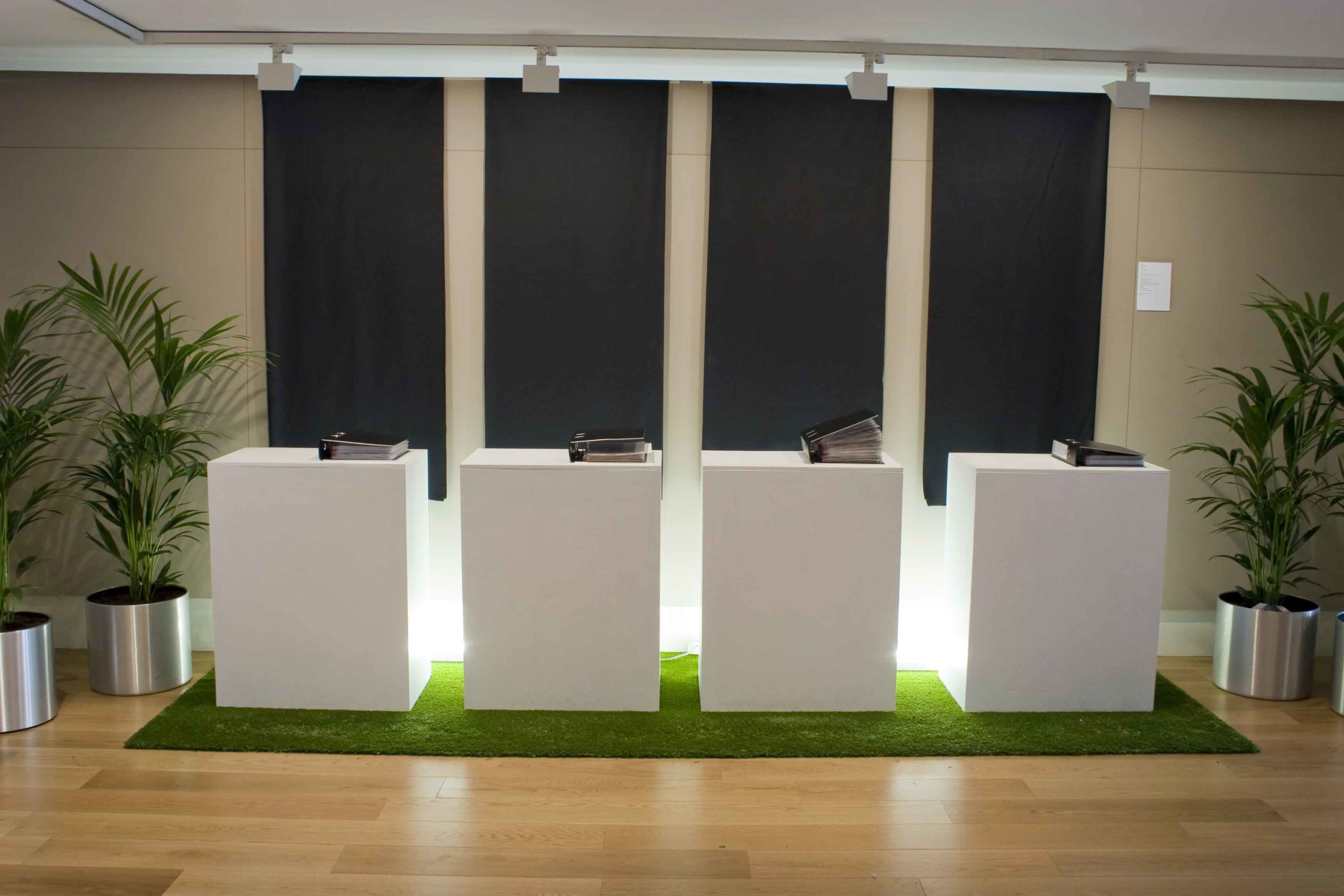 An obsession with objects and occurrences from specific periods of history flourishes in the present day and can be understood as an instinctive attempt to give meaning to concepts such as authenticity, faith and even time itself, which may currently seem particularly nebulous.

In the “Illusion of the End”, written late in the last century, Jean Baudrillard discussed this obsession with the past (or fabrication of an idealised past) which has flourished in recent decades. According to Baudrillard the corollary of this obsession is that we remain locked in an exhausted cyclical stasis, rather than progressing into a future. Though one might understand this pessimistic response as justifiable, considering the epidemic of revivification, Baudrillard’s argument obscures the fact that reinvigorating objects, images and occurrences from bygone, even forgotten times, isn’t necessarily motivated by a desire to regress, nor is it indicative of nostalgia.

In fact the compulsion to gaze back into the past – towards that which provides a trace of something potent and definitive – stems from the need to identify and subscribe to an optimistic framework for the future. Reproductions of charged moments of artistic or political activism from yesterday are ubiquitous today, because they have become touchstones, reawakening us to the full potential of human endeavour, were there not such a deficit of will and perspicacity.

The images and objects in “Plans, Sections and Elevations” were assembled in an attempt to devise a set of semiotic signposts, rooted in the past but orientated towards the future. The presentation of the public exhibition was simply the physical, crystallised form of an expansive process of accumulation, preparation and organization. This process facilitated reconnection with cultural producers whose methods and convictions I shared. We were temporarily unified in the bright but short-lived light of a common goal. The process also supported the triggering of dialogue with new individuals and ultimately it was this interaction that permitted faith and idealism to eclipse the creeping sense of disappointment, failure and collapse to which one can succumb all too easily in a project of this scale.

Though distinguished by a preoccupation with the language of architecture, neither the exhibition, nor the broader project from which it grew, was simply “about” architecture. Rather the exhibition, and the processes surrounding and leading up to it, were concerned with inciting consideration of how a constructed environment can, over time, accrue contemporary significance while retaining residues of that which has gone before. History is also a structure, one that may be re-accessed, renovated and restructured according to the needs and desires of its current inhabitants.

In the case of “Plans, Sections and Elevations” the series of diverse encounters that arose from the web of material, lay between an all encompassing total work of art and a cluster of autonomous but cohesively unified components, presented in mutual dialogue.  Despite the museum style signage it was difficult for viewers to clearly define the status of the works, objects and other visible things on paper, which were not necessarily meant to be viewed as art. Such signage is inconsequential where meaning is surrendered to strangers, as it must be. At the point of transfer the curator’s relationship with the project alters. The grip of the project lessens for the first time and one is struck – perhaps only momentarily – by the realization that the ever advancing pause between past and the future, which we call “the Present”, has already ended.

-Is a demonstration of the way in which images, objects and situations from unremembered histories can assume a subjective significance and symbolic purpose and hence be used to signify an attitude or sensibility.

-is an ongoing venture, the mission of which is to counter disenchantment whilst satisfying a compulsion toward order and rationality.

-is a demonstration that those phenomena initially judged as failures or successes may, with the passing of time, reveal themselves to be quite the opposite.

-is an exhibition comprised of works by artists and architects collated and displayed to demonstrate the potential of the visual language of architecture as a vehicle for non-representational expression.

-is a presentation of historical images and references, the collation of which is motivated by a compulsion to excavate and analyse fragments of cultural, political and social precedent as a means of
understanding the present.

-is the product of strategic collaboration between a number of affiliated practitioners who wish to reinstate the possibility of envisaging a future via the enhancement of the present through cultural production. 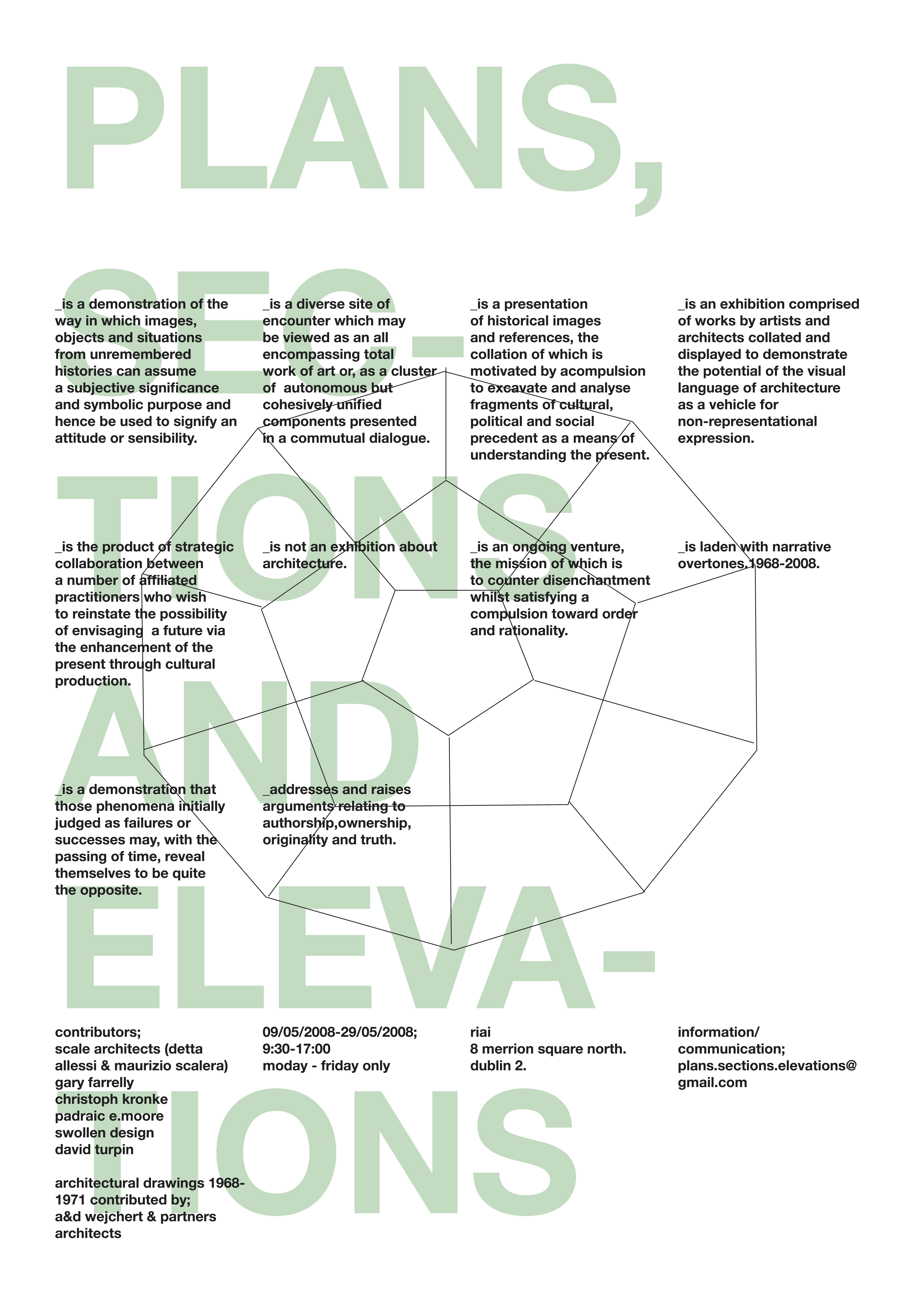