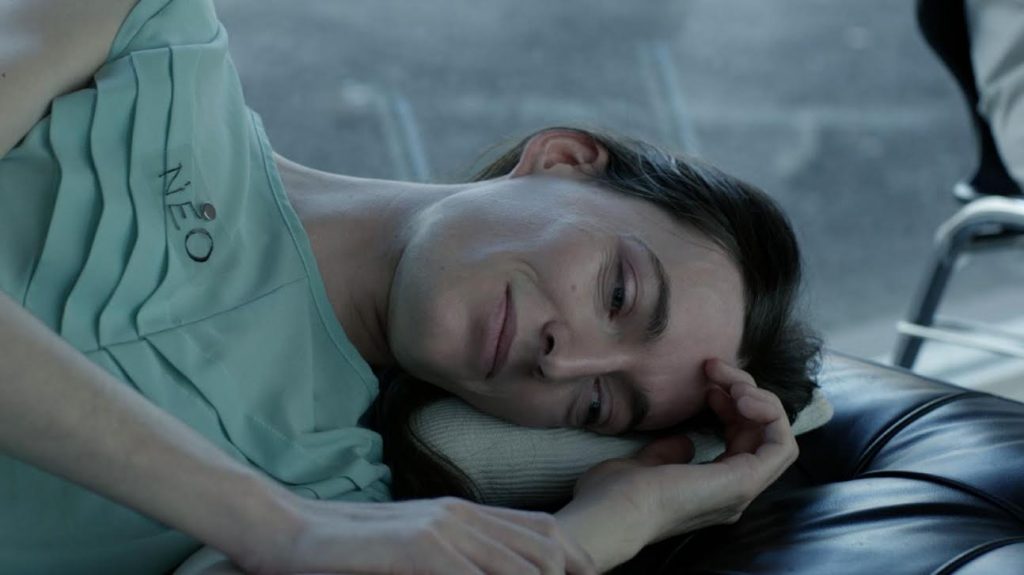 Pádraic E. Moore: Before we discuss your recent work, perhaps you can offer some insights into your background?

Doireann O’Malley: I was born in Limerick and lived there until the age of nine, returning in 1999 to study Sculpture and Combined Media at Limerick School of Art & Design. Gerard Byrne, who has been a formative influence on my practice, was teaching there at the time. After this, I completed an MA at the Belfast School of Art, studying under Willie Doherty. At the time, I was working mainly in photography and focusing upon a range of subjects – such as female representation, androgyny and mythology – that have, in fact, become prominent again within my work in recent years and were the focus of my exhibition, ‘Prototypes’, at Dublin City Gallery The Hugh Lane (22 June – 14 October 2018). Before art college, I attended a Catholic convent school in Clonakilty, County Cork, and I think that this experience had a lasting impact upon my work. At that time, in the mid-to-late 90s, institutions of that antiquated nature were coming to an end, having remained largely unchanged for decades. The physical environments, theatrical interiors and the expansive fields, which I ran in daily, have haunted my dreams ever since, sealing a growing desire to make films.

PEM: I read in the exhibition press release that your work is often directly shaped by material gleaned from dream analysis?

DO’M: Around five years ago, I began visiting a Jungian psychoanalyst and attending dream analysis workshops. This encouraged me to see dreams as a useful resource for my work, so I started recording them. Initially, I was writing about my dreams and then began to develop a script of experimental texts. For some time now, the ultimate goal has been to succeed in capturing a dream on film and this is reflected in the style that the ‘Prototypes’ series is shot in. I made a conscious decision to create the effect of moving through the scenes in a dreamlike manner, with dreams being recalled through analysis and narration. One of the protagonists, Pol Merchan, participated in an extensive workshop where our dreams were analysed with a Jungian psychoanalyst. The rest of the cast participated in a shorter workshop. These dreams were then transcribed and incorporated into the script. This dreamlike approach also enabled me to underscore aspects of the trans body, as an interesting site for deconstructing theories, including alchemy, transhumanism and a queering of psychoanalysis.

PEM: Judging by the outcome, I’m guessing that the production process involved a large team?

DO’M: The project required considerable funding and logistical organisation. Several project grants were invaluable to the development and production of ‘Prototypes’, including: a small production grant at The XPOSED Queer Film Festival in Berlin; a research grant from the Berlin Senat; a 2016 media art grant from the Foundation of Lower Saxony at the Edith-Russ-Haus for Media Art; a Stiftung Kunstfonds project grant; and an Arts Council of Ireland Next Generation Award. Having realised that I wanted to make cinematic productions, I worked with Albrecht von Grünhagen and Matan Radin, who used Arri cameras on several dolly and gimbal setups, in order to film scenes from several different perspectives, as I had written the script for multiple screens. This allowed me to create the impression that the viewer is drifting along in a disembodied manner, essentially creating a dreamlike atmosphere. I wanted the viewer to feel as though they were part of the narrative, as opposed to being a voyeur. In several scenes, the gaze of the camera is almost machine-like, in its scanning of the protagonists. The soundtracks were composed by Armin Lorenz Gerold, with whom I developed an improvisational way of working. The second film was shot only a few months before the exhibition in The Hugh Lane and involved a larger cast and crew. 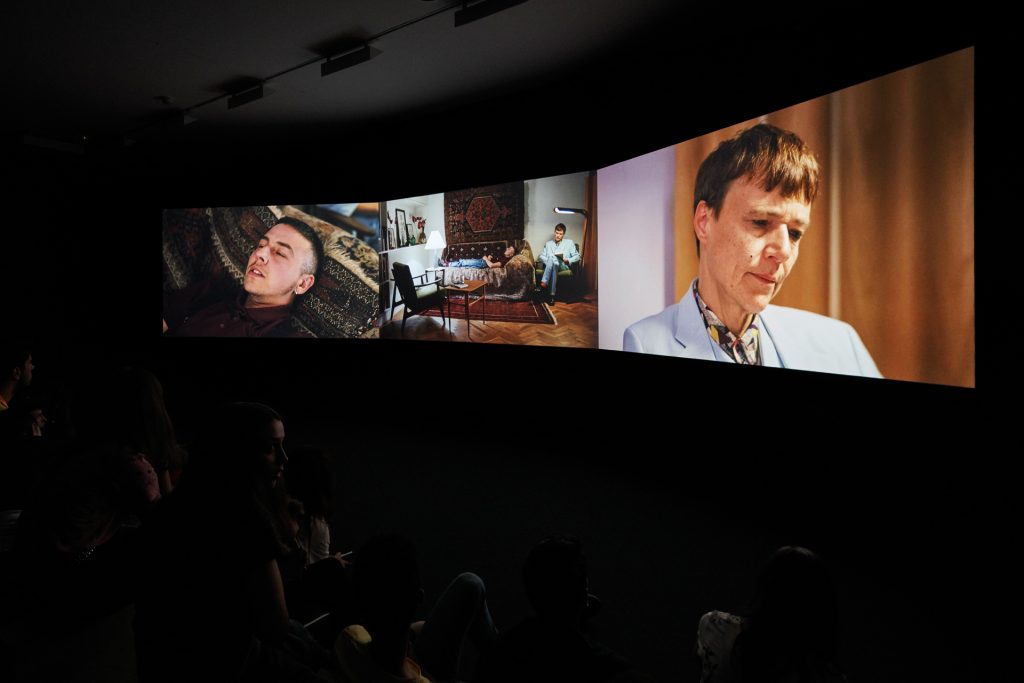 PEM: Did you use scripts in ‘Prototypes’?

DO’M: The films are essentially collages of material shot over a two-year period. The communities that I have met in Berlin have had an impact upon me, and all of the protagonists have some prior experience with performance. The fact that they were largely playing themselves was conducive to improvisation; it helped to shape the film-making process in unexpected ways and many of these elements were included in the script. In the case of Prototypes I, I also used material gleaned from the psychoanalytical dream responses, interviews, the protagonists’ own writings and experiences, as well as from  theorists such as Karen Barad. In the first film, the protagonists learned the scripts, whereas in the second part, Jamie McDonald (who plays the Director of the Institute) and I designed three different games for the characters to use while improvising. The second film was non-scripted, but certain parameters helped to structure the direction of conversations. PEM: Does Science Fiction inform your work?

DO’M: I suppose on some level I’ve always wanted to recreate Kubrick’s 2001: A Space Odyssey (1968)! Ursula K. Le Guin’s novel The Left Hand of Darkness (1969) was hugely inspirational. I’m particularly inspired by her depiction of time travel and also the way that she creates worlds in which there is a possibility for sexual variance that is not so polarised. The writer Octavia E. Butler was also a huge influence. The film features voiceovers comprising extracts of writings by Karen Barad, who looks at theoretical physics from a queer perspective. The Director of the Institute’s dialogue also appropriates elements of Lao Tzu’s epic Tao Te Ching. Ultimately, the films were a patchwork of references to feminist theory, art history and science fiction. I am also interested in spirituality as methodology for focus and transformation.

PEM: Can we discuss the representation of non-binary individuals in your work?

DO’M: Gender is probably one of the most contentious and oppressive structures within society. Transgender politics have made a massive dent on these structures, ultimately proving the need to recognise and celebrate difference to the binary system, or to potentially dismantle it altogether. My intention in making ‘Prototypes’ was to create a tableau that functions in relation to the history of representation that also deals with the depiction of queer bodies. There is a push towards being definitive, in terms of binary choice that reproduces stereotypical notions of the ideal. As you will know from ‘Prototypes’, I have worked with several trans and intersex people and this is certainly something that they have encountered in their own lives. I am interested in exploring these ideas and how they reflect upon society in general.

PEM: Can you discuss the Marrakech residency that was awarded as part of the Berlin Art Prize?

DO’M: The residency will be in Queens Collective in Marrakech, which is founded upon cultural activism, feminism, community engagement and artistic exploration. It is focused on gender equality, female empowerment and vulnerable communities. I am really excited to meet the artists there and potentially work with them on a film. PEM: Are there any specific ways that you hope to develop your work in the immediate future?

DO’M: I’m eager to find more immersive ways of showing my films that will incorporate several screens, multiple perspectives and bigger installations. I am really interested in the idea of creating environments in which moving image pieces can be experienced. Next year, I will participate in a mentoring initiative called The Berlin Program for Artists. I want to continue working with museums and galleries, but I would also like to make bigger productions. I am developing two ideas for films, one set in Ireland in a convent and the other in Vienna, with a couple of the protagonists that I worked with in ‘Prototypes’.