Of Lilies and Remains 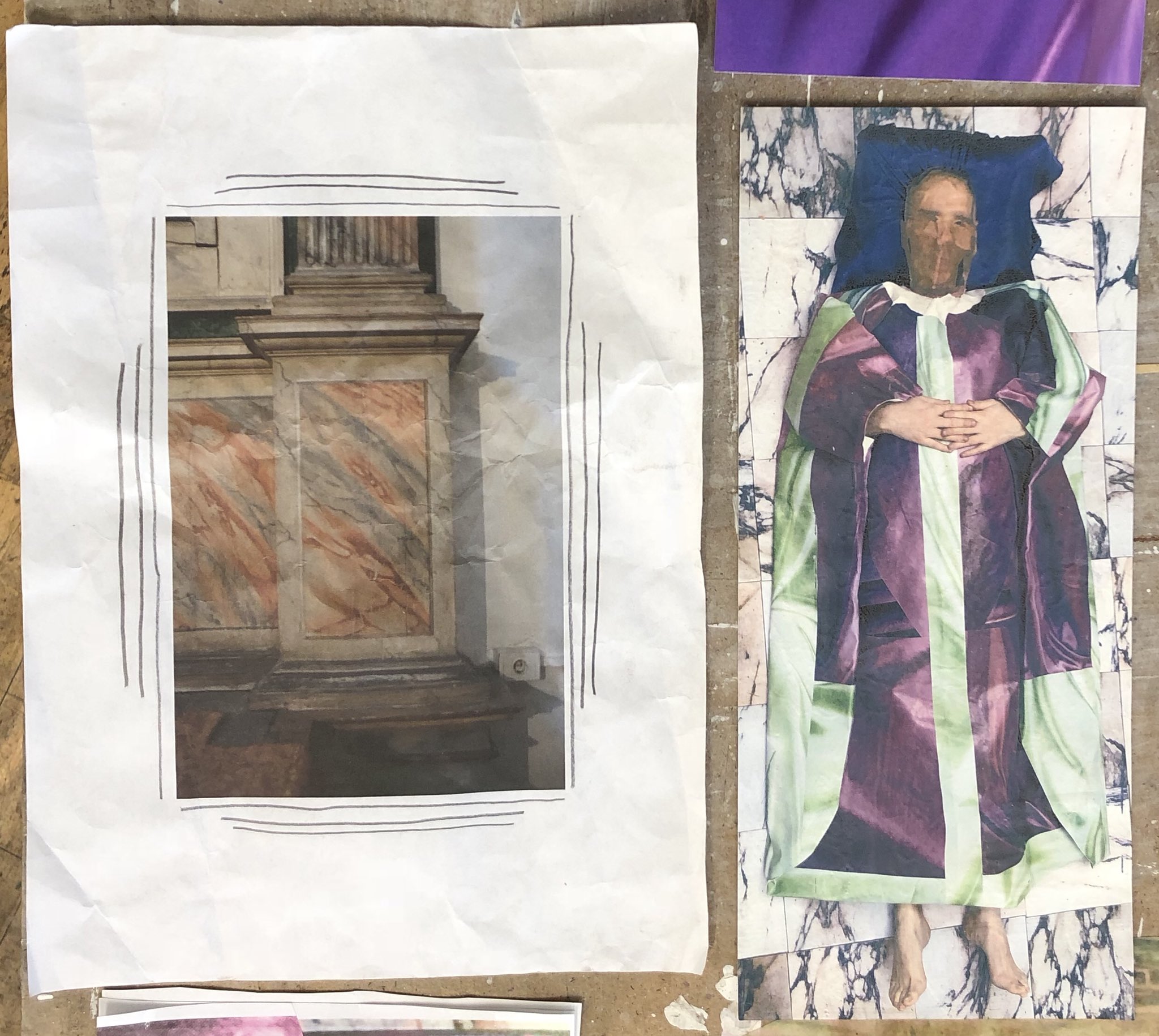 The history of the art and architecture of the Roman Catholic Church can essentially be viewed as a chronicle of a culture in the service of indoctrination. This is particularly explicit in the case of figurative sculpture and painting depicting the martyrdom of saints and, of course, of the passion of Jesus Christ. These subjects offer scope for the portrayal of extreme suffering; the flaying, excoriation and mortification of the body.  Much of the visual art that has emerged from Catholicism demonstrates a celebratory obsession with ascetic anguish and physical torture. Indeed, from an analysis of its artworks alone one might deduce that the psychology of Roman Catholicism is fundamentally sadomasochistic. However, it is not only representational art forms that can be viewed as a vehicle for liturgical ideology. Almost every detail of ecclesiastical architecture, including materials used and structural design, plays a part in an apparatus of conditioning. Churches are constructed to be dramatic spaces in which ritualistic displays of propagandistic power can be orchestrated. In the case of Ireland, late 19th and early 20th century ecclesiastical architecture in particular was often conceived to create a hallowed atmosphere of awe-inspiring refinement. The works of Austin Hearne address such subjects indirectly; his prolonged aesthetic analysis of the materials, surfaces and iconography that constitute both the minutiae and the scale of Catholic visual culture informs his assemblages, photographs and installations and indeed this exhibition, Remains.

In conversation Hearne emphasises his staunch opposition to the insidious institutional control that the Roman Catholic Church continues to hold over Irish Society. Such control is apparent in the extent of Church-led primary education and the fact that at the time of writing the Church in Ireland has urged its followers to vote against changing the country’s strict anti-abortion laws in a referendum due in May 2018. Hearne is outraged by the hypocrisy of the Church, an organisation which openly castigates various cohorts for engaging in what it deems ‘deviant behaviour’ whilst simultaneously failing to address systemic abuse perpetrated by its own representatives. During a visit to Hearne’s studio we discuss the seemingly never-ending slew of revelations over the past two decades regarding the recent history of the Catholic Church’s conduct in Ireland. One of the nadirs has undoubtedly been the grim discovery of a mass grave of infants and young children at the site of the Bon Secours Mother and Baby Home in Tuam, Co Galway.  Although the reverential status previously afforded to the Church in Ireland has dissolved somewhat in recent years the organisation continues to maintain a stranglehold over several areas of Irish society. Moreover, the Church has failed to confront or even acknowledge its flaws and on an institutional level there have been all too few efforts to re-evaluate its ethos or theological position, particularly in relation to its views on sexuality.

That Hearne’s work is founded upon a polemic position does not prevent him taking a certain pleasure in savouring the seductive qualities of his chosen subject. His personal opinion does not result in artwork that is explicitly inimical toward the Church, rather his approach is more nuanced and often captures certain aspects of ecclesiastical material culture in an almost elegant light. Hearne frequently visits churches in Dublin and beyond as a means of carrying out fieldwork and gleaning material. Photographs taken in these environments constitute an essential element of his work and although some of this material is slightly manipulated it is never altered to the extent that one is uncertain of its origins. In the case of this exhibition, his interest in exploring the formal potential of the surfaces and textures of this material is demonstrated particularly in the site-responsive photo-collage entitled Partition. The pattern on this piece is comprised of images of extravagantly hued marbled surfaces, photographed in various Dublin churches and based on a side altar located in nearby St. Audoen’s Church. Pieces such as Partition draw attention to paraphernalia that is already in the public sphere but is often overlooked on account of its quotidian character. 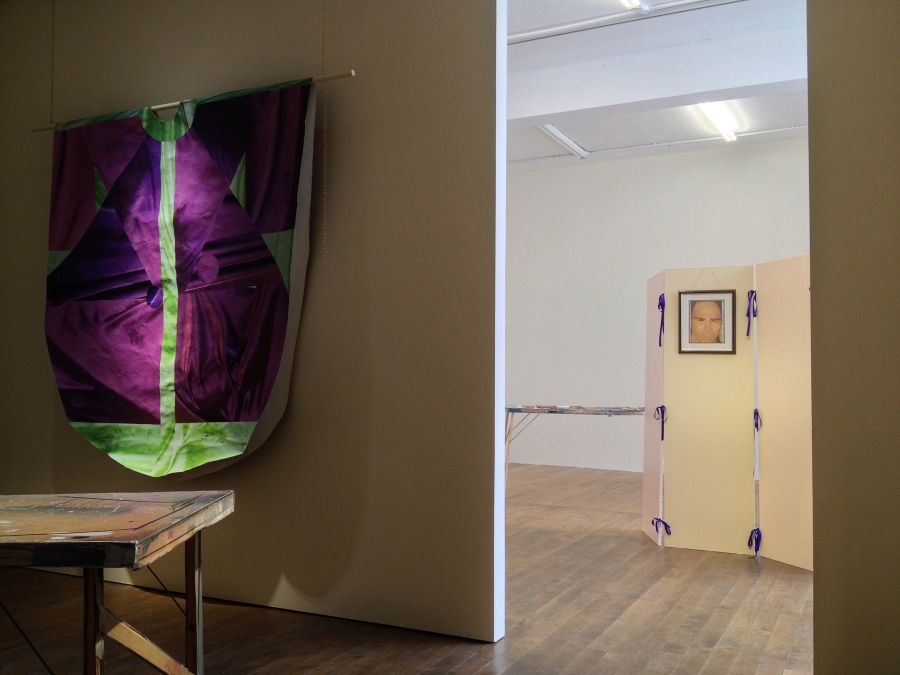 In responding to and incorporating material that could otherwise be overlooked Hearne’s work possesses what could be described as an ethnographic inflection. This is demonstrated in the work entitled Slab, consisting of a paint splattered wallpaper pasting table on top of which is displayed a collation of material, images staged by Hearne alongside more direct and uncontrived documentational photography. While the staged images allow Hearne to explore and exaggerate the aesthetic potential of his subject matter, other unmanipulated images chronicle some of the stranger episodes in the recent history of Irish Roman Catholicism. See, for example, Hearne’s use of the face of a self-proclaimed ‘seer’ who came to prominence in 2010 during his presence at the Knock Shrine in Co Mayo. This individual’s claim that he experienced several apparitions of the Virgin Mary precipitated a wave of hysteria evocative of that which accompanied the moving statues phenomenon that swept across Ireland in 1985.

Situated elsewhere in the exhibition space is Ghost Slab, a work comprising a photographic simulacrum of the previously mentioned Slab. Unlike the ‘original’ object, of which Ghost Slab is an indexical copy, there is no other material displayed on top of this table, allowing one to see clearly the paint splashes, silhouettes and general wear-and-tear unobscured.  Although this a painter and decorators’ wallpaper pasting table, the surface of the work also elicits memories of the surfaces one might have worked upon during art class in primary school. The association of this work with school memories is undoubtedly and intentionally prompted by the fact that the space in which this exhibition takes place was itself originally the P.E. hall of a primary school. The buildings in which Pallas (and the neighbouring BIMM) are now based retain many of the elements that remind one of their original institutional purpose.

These buildings are just two of countless buildings in this part of Dublin (The D8 Postal District) built by the Roman Catholic Church during the late 19th and early 20th centuries. The sheer number and scale of such structures underscore the extent to which the physical fabric of Ireland was -until very recently- dominated by edifices that had been built by the Church. Just a few kilometres from Pallas is the site where St. Vincent’s Industrial School – popularly referred to as ‘Goldenbridge’ – once stood. Although Goldenbridge was one of several institutions referred to as an ‘industrial school’ the term school is a misnomer as reports over recent years have revealed these were places of incarceration and punishment rather than education. Goldenbridge was demolished in the nineties but the erasure of the physical structure has not prevented new stories of horror emerging. The spectre of these historical realities lingers about Hearne’s exhibition. Remains creates a space in which these benighted aspects of recent Irish history can be considered via a meditation of the material trappings of the organisation. 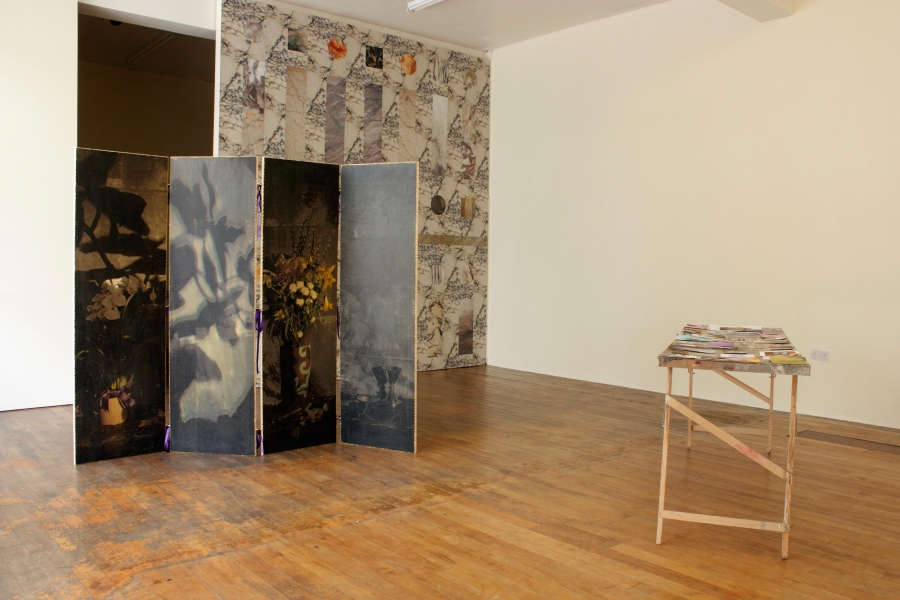 With the crucifixion as its foundational symbol, the visual culture of Catholicism is often funerary in its aesthetic, involving urns and other forms of sepulchral symbolism. It is also distinguished by a tendency toward a mannered theatricality and occasionally even flamboyance. At the centre of the tradition is a magico-religious obsession with the ‘potency’ of dismembered body parts that have been elevated to the status of relics. Rituals centred around such relics are the spectacles that provide a means of fortifying the devotion of the laity and maintaining the hegemony of Roman Catholicism. In 2001 ‘the relics’ of St. Thérèse of Lisieux (referred to as the Little Flower by her admirers) were brought to Ireland. Housed in an elaborately ornate shrine, her remains (consisting of thigh and foot bone) toured twentysix locations over two months where they were viewed by voluminous numbers of people before continuing a worldwide tour. The phenomenal interest in the relics of a 19th century French saint (canonised in 1925) demonstrate the extent of veneration that has remained a pervasive practice within the Catholic Church. Indeed, one could even argue that it is rituals such as these – constructed around the relics of the dead – which sustain the Church to some extent.  Hearne makes direct reference to St. Theresa in previous works, and in Remains he explores further the complex and somewhat perverse relationship that Catholicism has with the physical remains of the venerated. Funeral Shroud and Funeral Mask demonstrate the contradictions in the relationship that the Catholic Church has with the human body. When living it is an object of suppression, various forms of discipline and self-inflicted pain, but when dead it becomes a focus of worship.

Hearne occasionally references the kitsch elements of Catholic visual culture but ultimately, he has a deeper interest in its colours, surfaces and textures. This interest unifies all the works in this exhibition and is particularly evident in Screen in which he creates an aged and intentionally worn aesthetic making the edges of the object ragged and damaged through a series of scores and incisions which are then embellished with gold leaf. In Funeral Shroud Hearne’s use of almost gaudy greens and purples is a study in the regal extravagance that typifies ecclesiastical garb.

Catholicism is a faith that demands absolute control over the desires and sexual urges of its subjects, holding full jurisdiction over the body through a complex system of denial and repression. The ideology insists that all transgressions are voluntarily confessed so that suitable punishments may be meted out. Such disciplinarian methods are common within many organised religions but the Roman Catholic Church is distinguished by the sheer magnitude of the visual material it has generated that is unwittingly replete with sublimated signs of repressed urges. Almost every visual manifestation of the Catholic Church can be analysed in terms of suppressed desire, for the Church fetishises all that it repudiates. The visual and architectural apparatus of the Church is the embodiment of Catholic doctrine; promulgating the notion that one must submit oneself entirely, body and soul, to be a ‘good’ Catholic. Austin Hearne’s work reflects upon this but also injects a frisson of titillation via an irreverent and occasionally dark celebration of its sensuality.

Hearne’s investigation and use of his source material -and indeed his relationship to Catholicism- is comparable to that of several late 19th century artists associated with the Decadent Movement who developed a preoccupation with Catholicism not out of pious adoration but because the subject matter provided them with a licence to explore a range of unusual images and ideas. Decadent artists such as Félicien Rops (1833-1898) were interested in all that is sumptuous, brutal and bizarre in Catholicism and mined the subject, producing works that emphasise the latently erotic and outlandish aspects of the religion. One could argue that Hearne follows in this vein. Indeed, this solo exhibition is a study in the material apparatus of worship that quietly underscores the fact that the boundaries between religion, art and sexuality are extremely porous. Viewing this material through Hearne’s slightly altered lens reveals much about the true character of Catholicism.