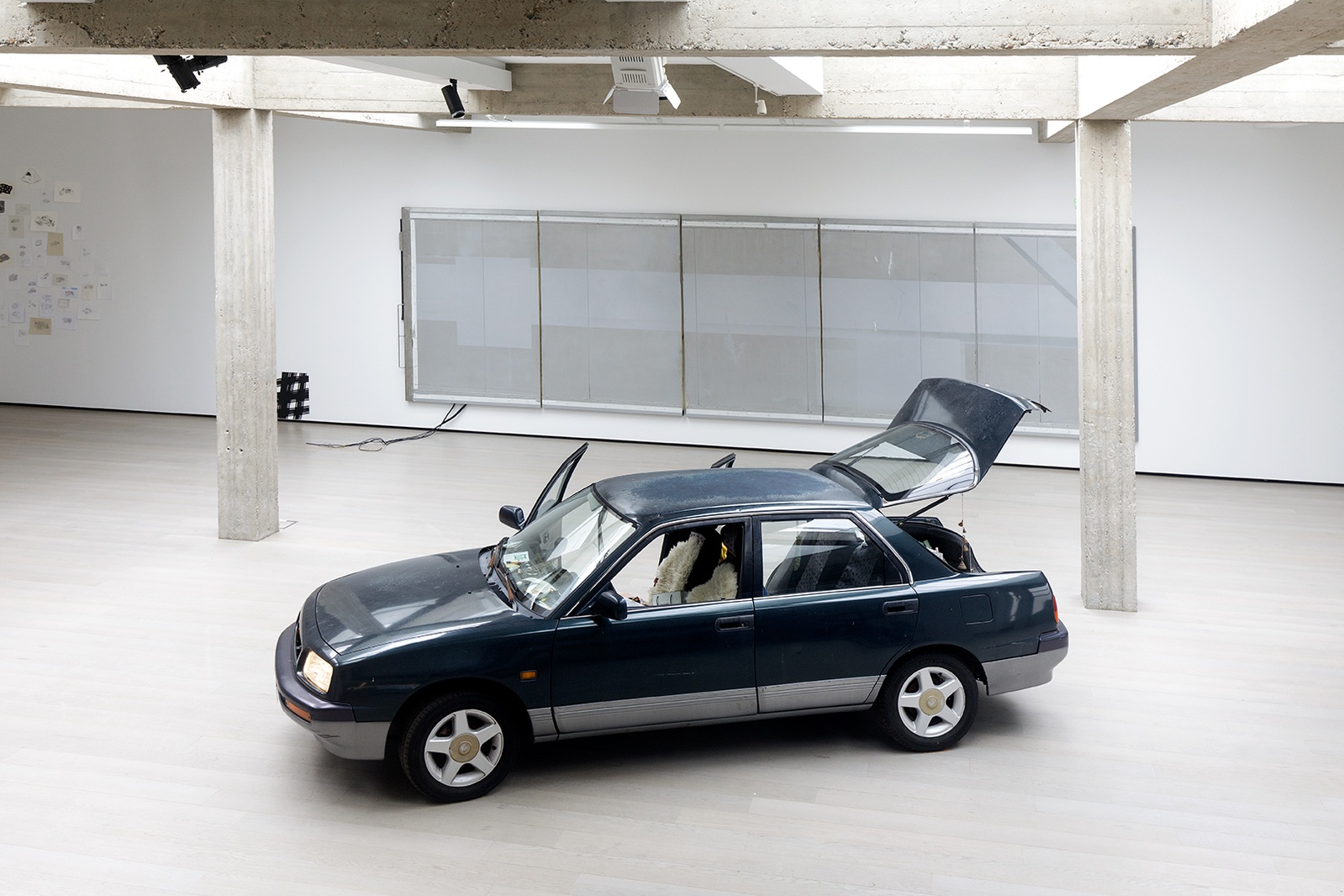 Here in my car
Where the image breaks down
Will you visit me please
If I open my door
In cars?
Here in my car
I know I’ve started to think
About leaving tonight
Although nothing seems right
In cars

Heavy Metal Parking Lot is an intergenerational group exhibition that considers the aesthetic and conceptual potential of the car in contemporary art. Responding to the original function of the venue (a Volkswagen Garage dating from the late forties) the project recasts the space as something between a parking-lot and scrapyard. Several of the artworks are “assisted readymades” that highlight the inherently sculptural properties / symbolic value of automotive components. In other works the car is anthropomorphized as a means of investigating emotional states such as failure, desire and fragility. The exhibition features multiple allusions to the legacy of Pop Art and highlights the continued currency of associated ideas regarding mass production; the commodification of objects / images and the absorption of visual vocabularies originating from advertising into “high” art. Historically the car in popular culture has been linked to the performance of a sense of hypermasculinity; a mechanical reinforcer of manhood. Several of the works in this exhibition subvert this idea of car as phallic signifier, either by deconstructing it or by presenting it as a locus of female sexuality. 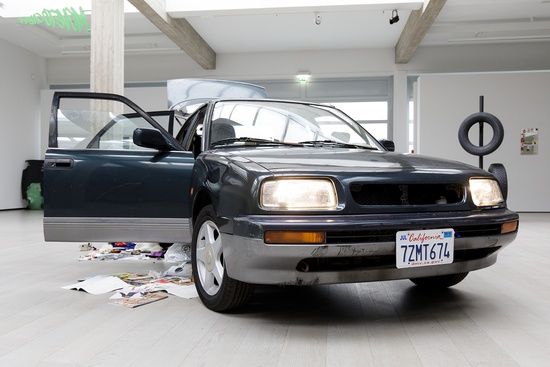 The thinking around this exhibition has been informed by a number of art historical, cinematic and literary episodes from the last century; particularly instances in which the physicality of cars and / or the act of driving became intertwined with human appetites and desires. There are countless examples of twentieth century culture in which the car has been associated with the idea of personal freedom and individuality; the possibility of hitting the open road and fleeing from the humdrum. Yet the hinterlands and liminal environments associated with cars / driving are also potential sites of aesthetic or psychological significance. In terms of art history this is exemplified in the case of proto-Minimalist Tony Smith who cited the experience he had in 1955 of driving at night along an unfinished / unlit motorway in an industrial landscape as epiphanic and hugely formative to his aesthetic development. As art historian Phyliss Tuchman notes, Smith’s account of this experience has become one of the most repeated anecdotes in the annals of contemporary art, yet the incident resembles an occurrence in a Joan Didion novel rather than an incident that helped spawn Minimalism.

According to Smith, “It was a dark night and there were no lights or shoulder markers, lines, railings or anything at all except the dark pavement moving through the landscape of the flats, rimmed by hills in the distance, but punctuated by stacks, towers, fumes and coloured lights. This drive was a revealing experience. The road and much of the landscape was artificial, and yet it couldn’t be called a work of art. On the other hand, it did something for me that art has never done. At first I didn’t know what it was, but its effect was to liberate me from many of the views I had about art. It seemed that there had been a reality there that had not had any expression in art1”

J.G. Ballard is probably best known for his 1973 novel Crash in which he proposes a mode of auto-erotics whereby the car in collision is the key to constructing more subjective forms of sexuality. However, Ballard’s entire oeuvre features references to the architectural infrastructure associated with cars; from concrete flyovers or derelict traffic islands. The motorway underpass or parking lot are frequently sites of illicit activity or transgressive, subcultural behaviour. This subject is touched upon in the 1986 documentary Heavy Metal Parking Lot by John Heyn and Jeff Krulik from which this exhibition takes its title. This film focuses on a group of young heavy metal fans who have gathered for a ‘tailgate party’ in the parking lot outside a Judas Priest Gig in suburban Maryland. Here the parking lot is a heterotopic zone where a diverse crowd of disaffected youths achieve some form of temporary togetherness in their shared alienation.

Another important touchstone in the development of this exhibition was Charissa Tarranova’s book ‘Automotive Prosthetic’ which was published in 2014. In this book Terranova considers the car as a “rhetorical device, functioning as a mode of representation, framing device, means of debasement, and conduit for the generalised explosion of media beyond the conventional fulcrum of painting and sculpture”. At the heart of Terranova’s thesis is the idea that in the 21st century the car has become a naturalised extension of the human body.

This seems an important area of consideration as boundaries between the car and the human body are blurring and the human-machine relationship changes. The recent advent of self-driving technology combined with the environmental crisis is altering how we utilise and think about the car.  We are now witnessing the emergence of a new dynamic in the relationship between humans and machines; whereby the car has become an extension of the human body which in many cases works autonomously and can decide where to go and at what speed. In the face of these developments one wonders if the car will remain such a potent symbol of power, desire and escape?