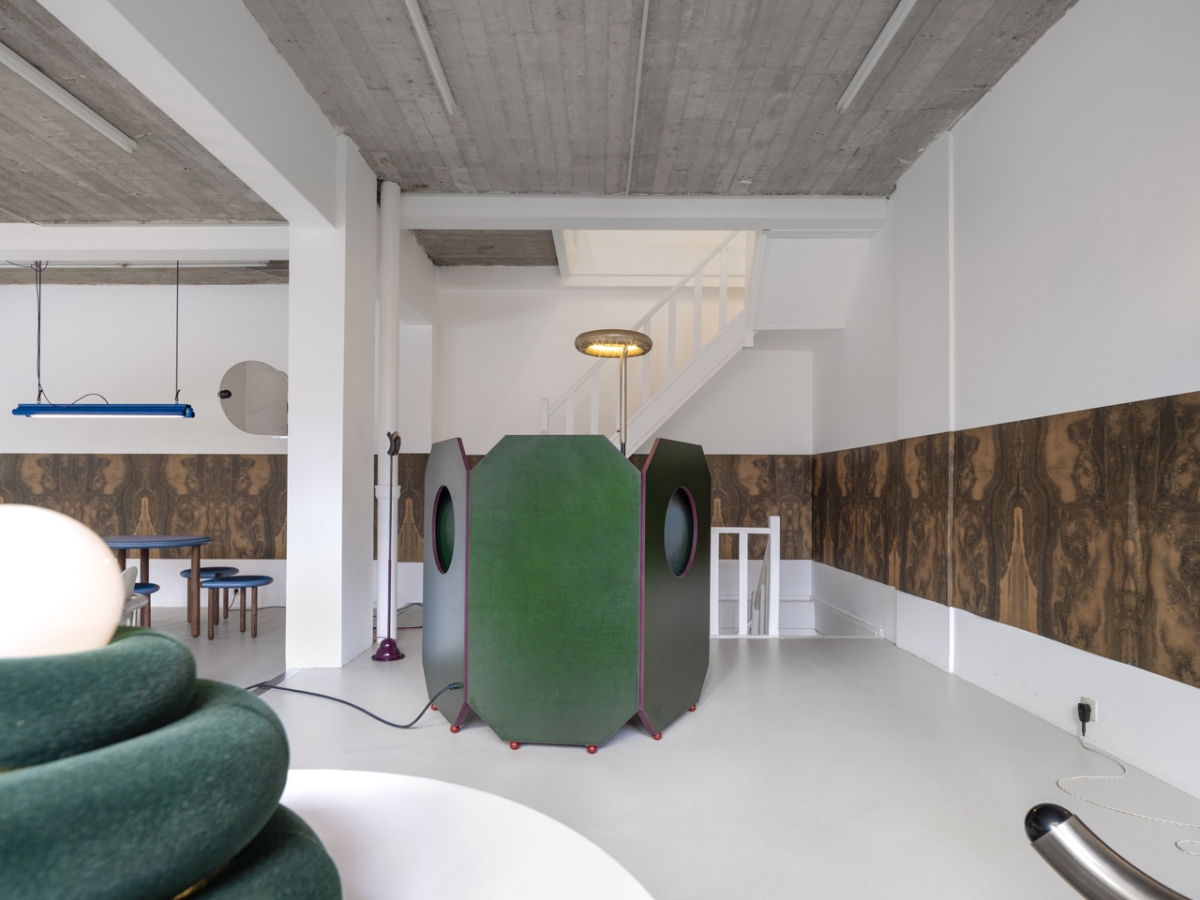 Maniera was founded in 2014 with the aim of commissioning artists and architects to produce furniture and ‘functional objects’: each chapter of the exhibition programme varies in scope and can consist of anything from a single piece to a constellation of sculptures. The 25th ‘edition’ is by Koenraad Dedobbeleer and takes the form of a bar, titled 1b. The accompanying essay describes the Belgian artist’s work here as a ‘composition with fourteen objects of various scales’ – tables, chairs, lamps, side tables, table- ware and more – and ‘composition’ feels like a particularly apposite description. For the overall appearance of this ensemble is particularly painterly; a harmonious arrangement of complementary colours and geometric forms. Everything is framed by a digital photoprint of marble panelling that wraps around the room like a wainscot and creates a sense of spatial unity while also screening off the street-facing windows. 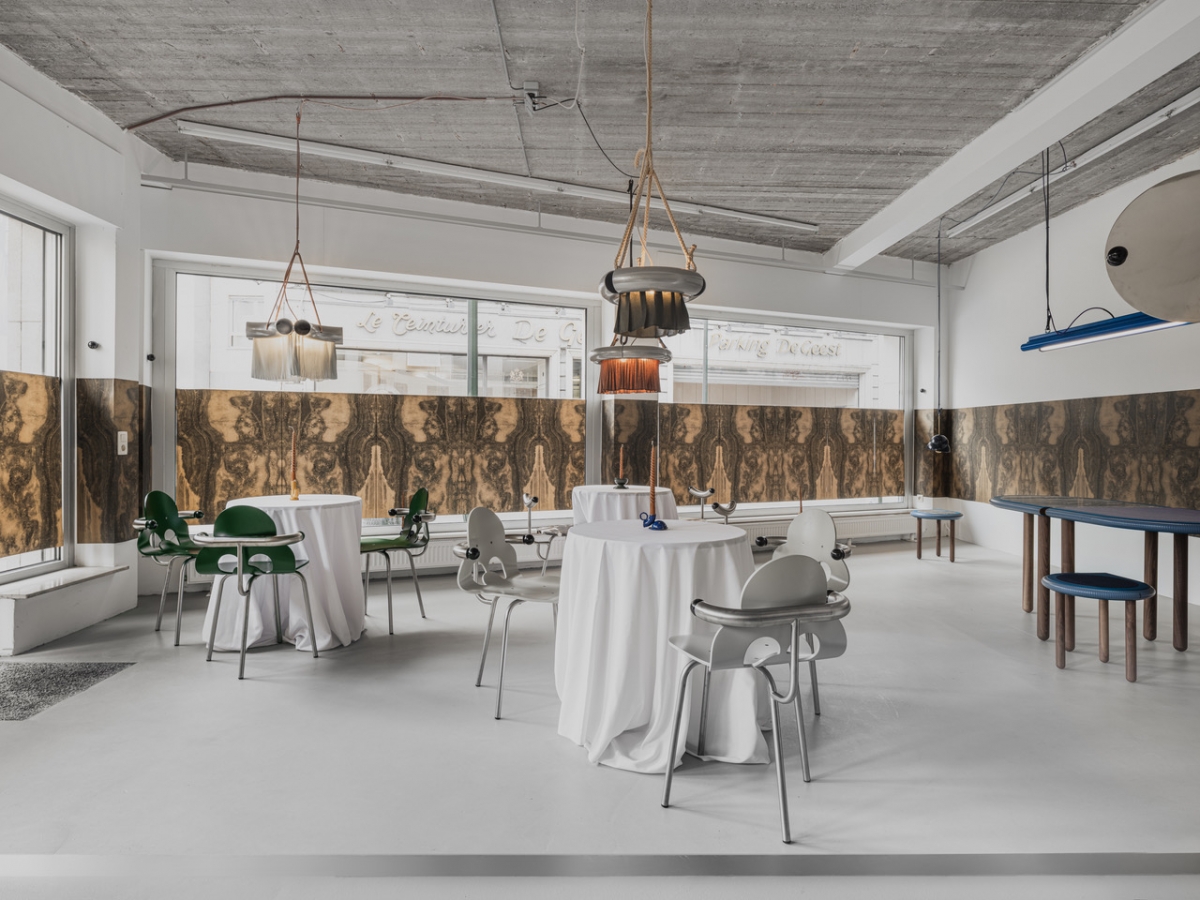 The centrepiece of this elegant hostelry is Pussyfoot, a green and purple cocktail cabinet that would not look incongruous in one of the bohemian cafés associated with the Vienna Secession. Indeed, a touchstone in the concep- tion of 1b was apparently Josef Hoffmann’s Cabaret Fledermaus, which opened in 1907 and was conceived as a gesamtkunstwerk within which artists could socialise and avant- garde performances be staged. All fittings and furniture at the Fledermaus were made by the Wiener Werkstätte, a cooperative founded upon aims that resonate with those of Maniera: to create utilitarian items that are also shaped by interdisciplinary artistic research. 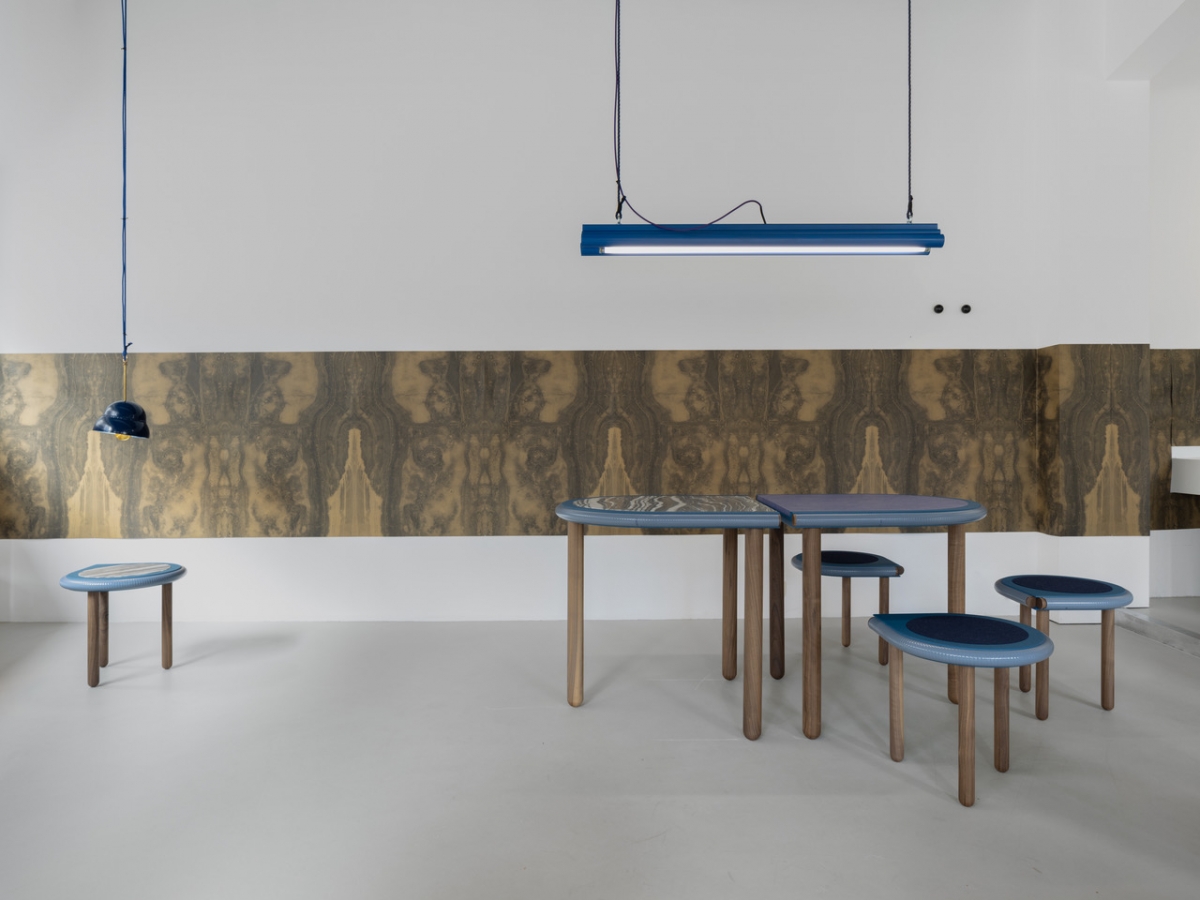 Although references to twentieth-century design are prominent throughout 1b, they are balanced by the inclusion of ambiguous, outré elements. Steel chairs redolent of Memphis Milano creations are adorned with backrests of a distinctly orthopaedic or medical appear- ance. Such details lend a hybrid quality to these objects; they defy neat categorisation and appear entirely idiosyncratic. Also significant was the decision to devise a programme of public events (dinners, conversations and musical perfor- mances) that transformed 1b into a social space as opposed to a sterile stage set. These happenings interrupted the conventions that might usu- ally hold sway in a furniture showroom and provided an opportunity to fully apprehend both the functional and aesthetic potential of Dedobbeleer’s objects.

1b by Koenraad Dedobbeleer was on view at Maniera,Brussels from the 16th October 2021 to 19th February 2022