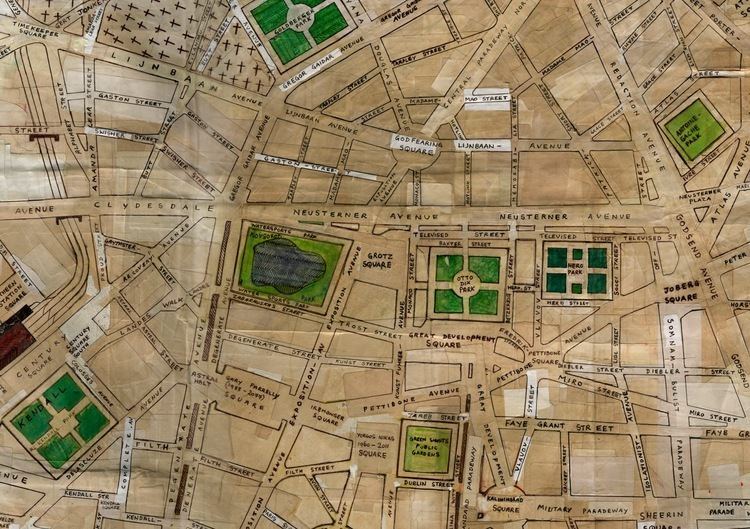 For Gary Farrelly, compulsive cultural production constitutes a crucial effort to furnish and enhance his milieu with “self-assuring” material expressions of personal fixations and fantasies. In order to sustain buoyancy and a sense of inimitability, Farrelly constructs “structures of feeling[1]” which in this particular show are comprised predominantly of semi fictional autonomous landmasses and nation states. Though these art objects are reifications of the personal predilections and predicaments characterising Farrelly’s world, the ordered cartographic organisms-and the macrocosms they represent-also signify a struggle to counteract the confusion and uncertainty of the collective difficulties of our overcrowded, over-stimulated society. Despite the vibrantly naïve and ostensibly decorative manner in which these islands are rendered, they are riven with dystopian allusions, which can be easily overlooked due to the deceptively ornamental appearance. This was equally the case with Farrelly’s previous solo show; “Saddam International Airport”(July 2006) in which references to historically factual devastation and disillusionment were methodically glossed over by persistently dictatatorial reiterations of an enchanting, celebratory nostalgia.

These islands exist to illustrate systems of ideological state control, structures of surveillance and methods of categorisation. This tendency toward “fanciful fanatical regulation” which dominates much of this work is not motivated by aesthetic motives alone. This inclination toward organisation is manifest in the classification of every region, and divulges a valid anxiety to register the relentless rise in anomie[2] that typifies our newborn 21st century. These depictions of Post-apocalyptic atolls where colour and line signify urbanised Foucauldian[3] or perhaps Orwellian topographies are not -as one might expect-expressions of angst or fear. In fact, these maps, which integrate local familiarities with constellations of vocabularies, names and images, seem to reveal a libidinal inquisitiveness to explore the potential positive ramifications of authoritarian order and control.[4]

The advantages of sovereignty are questioned in the way that each state is isolated and constrained by its own borders. In tandem, references to Beirut, East Germany, Polska Ludova, Palestine, North Korea the Irish Free State and the Falklands within Farrelly’s unreal islands signifies the inevitable catastrophes, which often result from the innate human necessity to expand and conquer new territories with ever superior, hegemonic ideologies and technologies.

Typically of Farrelly’s work these pieces are characterised by refined, alluring qualities offset by a raw, exquisite and energetic immediacy. Fragments of flotsam are adorned with subject matter that -depending upon ones level of inquisitiveness- can function in both formal and conceptual terms. The masses of information and the rigour of planning in each megapolis communicate the level of intensity with which Farrelly has contemplated the topography and geography of each microcosm. Moreover, the assimilation of an honest index of personal obsessions into visually appealing works of art constitutes a masturbatory realisation of amalgamated worlds incorporating components of places that are both factual and imaginary. This use of breadboards, and other salvaged cast off’s discloses a desire to utilise ‘a la Schwitters[5]’ the discarded debris of this age of excess and over abundance, and is balanced by delicate and fastidious compositions which function autonomously as striking abstract images rendered in domestic and schoolroom stationary. This predilection toward cultivating a distinctive style upon the surface of found materials divulges the Defastenist aspiration to be prolifically productive in order to sustain an idiosyncratic existence by innovatively generating a means of subsistence within this modern mechanism that is our increasingly homogenised consumerist civilization. The visible references to the office situation within this installation are also typical of the Defastenist exposition and declare a collaborative desire on the part of artist and curators to aestheticise that which is a functional necessity. The office reveals our attraction and fascination to administration, bureaucracy, efficiency and officialdom, and the decision to emphasise this apparatus of trade and exchange.

In these works Cartography is depicted as a method of control, and issues surrounding the commodification of art, people and property are central. Ultimately this exhibition documents and depicts how all these aforementioned issues become progressively more problematic and conflicted as the increase in nomadism and the proliferation of telecommunications persists in radically transforming our spatial and temporal conceptions of the globe. Perhaps most significantly this exhibition emphasises that in the face of these changes territory can no longer be a central and defining source of identity.

(1) Theorist Raymond Williams coined the term “Structures of Feeling”. In one sense the structure of feeling defines the culture of a period. In “the Long Revolution” he describes it as “the particular result of all the elements in the general organisation”. Williams claimed that this structure was abstracted, in the sense that individuals didn’t possess it as such, but it was ‘possessed’ by the community as a whole, but not ‘in any formal sense, learned’. This intangibility leaves the ‘structure of feeling’ as a kind of indefinite, spectral presence, everywhere and nowhere all at once, informing all aspects of a society, despite the fact that it is unseen. His comment in “The Long Revolution” that ‘The peculiar location of a structure of feeling is the endless comparison that must occur in the process of consciousness between the articulated and the lived” explains how certain structures and assumptions are necessary for communication and continued acceptance of reality in general. These images by Farrelly- these parodic mappings of countries and states that exist only within the protectorate of the imagination- ultimately serve to emphasise the devastating reality that much of what we accept as certain and accurate are in fact accepted concepts that we, as individuals have very little evidence to substantiate.

(2) The term  “Anomie” was coined by sociologist Emile Durkheim (1858-1917) to describe the destructive condition arising within an increasingly industrialised society whereby individuals are provided with insufficient moral guidance or structures of self-definition. Though he acknowledged the advantages and the freedoms which modern life brought to individuals, he also claimed that the insatiable and often self-destructive desires of the individual must be balanced by the assertions of a guiding, regulating social structure. I believe that in this post-industrial information age, the rise of anomie within civilisation is discernible in the escalation of crime, eating disorders, addiction, depression, suicide etc.

(3) After French theorist Michel Foucault (1926-1984). His term ‘carceral archipelago’ is particularly apt in relation to this show.

(4) This accentuates the fact that we are currently programmed and controlled by an unobserved and insipid, but nevertheless repressive absolutism.

(5)  Kurt Schwitters (1887-1948) Exceptionally significant Producer of Collage Art and Assemblages, Schwitters was associated with the German Dada Movement and produced some of the earliest examples of large scale installations in Art History. Renowned For his “Merz”constructions, Schwitters was also a gifted poet.