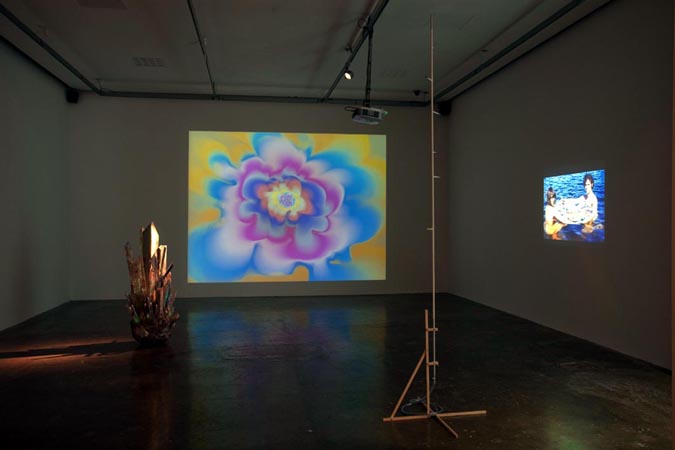 …at that point my colleagues and I began experiencing the first of several extreme onsets. None of us spoke at the time but discussion afterwards revealed that each of us present in the room were somehow quietly convinced that we were entering a higher level of consciousness…

The general public are invited to attend and participate in this Aion Experiment which will takes place at Dublin’s Project Arts Centre between the 12 February and the 12 April 2010. This experiment differs greatly from some of the more intensive previous Aion Experiments in which volunteers remained under close observation for prolonged periods. Throughout the duration of this exhibition several devices will be installed in the exhibition space, which will in turn become highly charged with energy that fosters cell regeneration and cerebral stimulation. The organisers request that all members of the public who plan to attend this experiment prepare physically and mentally in advance, as the Gallery will be charged with biofield energy. The organisers also wish to notify  visitors that effects of this Aion Experiment may only become apparent in the weeks following the event.The first Aion Experiment took place in Northern Europe in the 1930s, instigated by a team of practitioners from diverse disciplines including physics, chemistry, psychology and sociology. Since its inception the Foundation has stated that one central aim unifying its diverse members and affiliates is the desire to develop a greater understanding of the phenomena of body-oriented energy. To this end, numerous experiments have been undertaken, involving countless participants. In an attempt to heighten the results of the experiments, they often take place in temporary laboratories, erected upon sites identified – at some point in history – as charged with naturally occurring biofield energy.

One of the many motives driving the ongoing work of the organisation is a conviction that the human species is unaware of its own true potential.  Another unifying belief is that humans have, for the most part, become detached from certain fundamental truths and blind instinctive necessities.  Statements issued by the Foundation propose that unless the current situation is rectified radically and promptly, the human species is headed inexorably toward untimely self-destruction.

Like the Aion Experiments themselves – which can assume limitless permutations – the international foundation is distinguished by its quiet public profile.  Although numerous respected and admired scientists and practitioners – including Nikola Tesla, Marie Curie, Wilhem Reich and Alfred Kinsey – openly associated with Aion Experiments for a time all information pertaining to work carried out by, and individuals involved with, the Foundation, has become strictly confidential in the past decade. It is known that practitioners working in the realm of visual artists have, on several occasions, been invited to contribute in an advisory capacity to Aion investigation.  This is perhaps an indication that the visual arts remain a potent source of untapped potential in terms of maximising human capabilities. The practitioner whose involvement with the Foundation is most renowned is the Swiss artist Emma Kunz (1892 – 1963) who collaborated with the foundation in the momentous discovery of Aion A, a rock crystal with potent healing potential.

This event has been organised by Pádraic E. Moore, who wishes to acknowledge the research and production of Morris/Trasov Archive (Canada), Sam Keogh (Ireland), Takeshi Murata (U.S.A.), Ulf Rollof (Sweden) Ciarán Walsh (Ireland) and of course the Foundation for Aion Research, without whom this project could never have taken place.

“Well, the straps were unfastened, and the door I could see was cracked right open.  I unstuck my back from the leather chair and sidled over til my feet could reach the marble floor.  The door- it was steel on the inside, unprimed oak on the outside- pushed aside easily.  But it was the light.  Struck me down, as if I was a mole or something.  After a few minutes it didn’t weigh on me so much, and I could see the trays and tubes around, then the way out.  And I practically flew out of there, out of the lab, out of the glass doors, nobody could stop me.  Hadn’t been outside in ages, felt like a kid.  Felt like a kid running home, snot all down my face so happy I couldn’t care. …  The air outside was like a hit, you know? And I’m just turning round and round before I finally see I’m still barefoot.  Barefoot and I can’t feel the grass, the stones.  But I can see the rising concrete face of the building, and I can feel myself rising, I can feel that the gravity of the Earth and me, it ain’t so grave, you see? I was feeling the weight of my body, and it was nothing.  Nothing.”

“I had been out in town near Rangeley, just past that bend by the pond looking for inspiration.  It was tranquil, a mild breeze rippling the water’s surface and casting shards of the sky into uncertain shapes.  One man, hunting with his dog I think came by, who stopped to chat…There was some confusion, but then I spoke, not with great force but with a good deal of conviction and the words…came out of me and were floating in front of the air.  It wasn’t so much the thing itself, the occurrence, but that this had calmed him.  He told me afterwards, that it was as if the words had been spoken directly to him, inside of him, and he understood completely.  He understood all the directions they could take, all the meanings and backthoughts, all the double entendres and even the pure intentions of it.  He knew, he knew I had spoken to him.  I’ll never forget the way he explained it.  Now it seems to be activated by certain words, and I can feel it in my throat, in my vocal chords before they appear.”
Case AION542 – 04/04/1979:
“I was just around the corner, behind those trees where you can’t see the Centre.  I’d just spent several hours in there.  An elderly couple were enjoying a stroll through the forest, in that magnificent winter light.  Hard, crisp light with clear oranges that bloom on every surface they touch.  I remember, because they were both wearing jumpsuits, white and yellow, and those large visor-like sun shades.  Most curious.  Quite the vision of the future.  But it was just then that when I blinked my eyelids did not open again, and I had an involuntary squeezing of the eyelids.  I began to see those fireworks and city maps you get when you press your eyeballs, ‘floaters’ we were taught to call them in med school, but that always sounded crass to me.  But extremely vivid.  Of course I was concerned, I’d had cataract surgery some years previous.  But opening my eyes. Oh my. It was another world.  They bore halos.  Not just the couple.  The trees, each leaf, each cell.  They turned in place around their centre, appearing to constantly drift to the side while staying stationary.  Those at the periphery of my sight were the most intense, but I couldn’t quite pin them down, like seeing a hummingbird, but some genus beyond terrestrial, beyond celestial even.”

“Sometimes, after sessions we’d be hanging out in the rec room.  Still feeling some of the after effects of the test, right?  Everything just that little bit more unstable, but in that unhitching you also get that chance to reach out, to touch.  The thing I’d been doing just before this had been really focused, pretty intense, I’m still not sure what they gave me or what exactly the procedure entailed but it was strong, man.  The session leader had explained it comparing it with some other work, tests on phantom limbs where people could feel the absent part of them by touching like their cheek, or their shoulder, but talked about it like some form of physical empathy.  And the two of us taking part, we were sitting like us now, opposite each other when I felt a sort of tickle from another place, a kind of absent, satisfying sort of twitch. She looked at me and I could see she was there too, it was like a real arm, another invisible one that both of us had grown and was the link between us, but more fluid and just humming.  Just a few seconds, but we moved with it. … I guess it just put me in that direction, cuz after I was just sitting on the couch, other volunteers drifting in from their activities when I could feel the reaching. … These limbs, they seemed to extend between all of us, locking us into some sort of embrace.”
The above are the edited transcripts of the qualitative, highly subjective accounts obtained following the subjects’ release.  Each test required the sustained participation over a course of sometimes years, and each passed repeated standard health exams.  Despite scientific inaccuracies, the raw data contained therein indicates a strong association between the subject’s experiences and the possible successful outcome of the ongoing Aion Experiments. in releasing latent biopsychic energies.  The Board hereby advise to continue all activities.  Said subjects will again be taken into custodianship and further developed.