​Notes on the Outside In 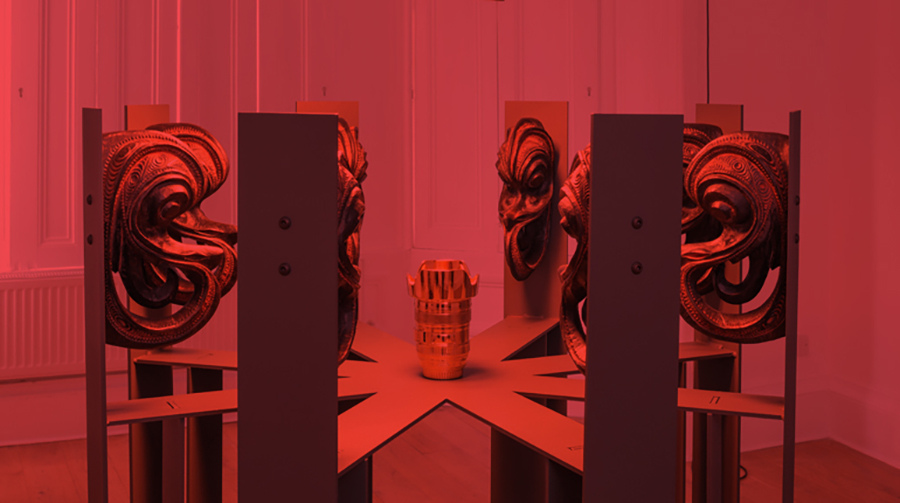 At the time of writing a salvage team are combing through the charred remains of the National Museum of Brazil. An inferno has transformed more than 20,000 artefacts -including sacred relics, precious artworks and even fossils- into ashes[1]. Impressive arrangements of objects hitherto displayed according to art historical, ethnological and zoological categories have been reduced to remains from which no order can be discerned. A magnificent meteorite, comprised mainly of iron, is one of the few objects to survive. Having withstood a transatmospheric voyage it seems apposite that it would outlive this conflagration[2]. In many cultures, such celestial objects were, and still are linked with supernatural origins, religious significance and the power of the gods and worshipped as possessing otherworldly powers as exemplified by the meteorite of the Kaaba at Mecca[3]. One wonders if it was the knowledge that these rocks had fallen from the sky that imbued them with power? Or were there once people capable of perceiving subtle energy from these objects via some form clairvoyant faculty such as psychometry?

The emotive responses from the bands of protestors who crowded outside the gates of the National Museum of Brazil in the aftermath of the blaze demonstrates the extent to which people feel a sense of connection to the artifacts of their cultural heritage. The destruction of such objects constitutes a loss of that which gives tangibility to concepts such as identity and continuity. However, perhaps these emotive responses are also the result of something more innate; the realisation that the collected culture of millennia can be indiscriminately eliminated in just a few moments by something as elemental as fire. If methodically accumulating and organising artefacts represents the apex of a ‘civilised’ society then perhaps the destruction of these artefacts symbolises something wild and untamed.

This process of naming, categorising and ordering could be considered one of the defining traits of our species and is present in all areas of human society. The propensity towards classification is particularly evident in museumological environments; sites where items are stored, preserved and displayed but also where elaborate taxonomies of order are implemented. These systems of classification represent the innate urge to rationalise -and perhaps ultimately control- the world of things that surrounds us. This process of classification serves to fortify to the structural reality that we have created, by constructing material evidence of a chronological, linear temporality. Often the apparatus of the museum serves to emphasise and amplify the sacred potency of certain artefacts and reinforce their thaumaturgic value and totemic power. This partially explains why certain objets d’art incite practices which, though normalised, have origins in a mystical, ritualistic impulse that might seem incompatible with our increasingly rational and incredulous society.

In the early 20th century a constellation of artists associated with the avant-garde gleaned creative stimulus from artefacts they encountered in ethnographic museums. The aesthetic of masks and votives from Africa and Oceania resonated in particular with Cubists and Expressionists who sought to develop new visual vocabularies. In viewing these artefacts as representative of a timeless authenticity – the fruits of ‘primitive’ instinctual drives, these artists ultimately perpetuated a colonial discourse. As the 20th century progressed a different tendency emerged whereby artists developed a more anthropological interest in the value and power of ritual objects as opposed to their outward aesthetic. This aforementioned tendency is exemplified by figures such as Kurt Seligmann (1900–1962) who was associated with the Surrealist movement and whose research into the fields of comparative mythology and religion contributed to the emergence of a view of magic that was more global and without western bias. Crucially, many of the artefacts that appealed to figures like Seligman were of interest not because of their aesthetic, but because they were known to have served a sacramental function and thus deemed to be imbued with what can be termed numinous properties.

The term numinous (from the Latin numen meaning “arousing spiritual or religious emotion; mysterious or awe-inspiring”[4]) can be used to describe the subtle, instinctual connection between persons and things. According to Rudolf Otto (1869-1937) numinosity “gives expression to aspects of the holy or sacred that are foundational to religious experience but which are ultimately non-rational[5]”. Numinosity can be described as a type of ‘mysterious awe’ that evokes something so arcane that it cannot be described or communicated via language. According to Otto, the numinous experience cannot be taught but must be awakened in the individual or “reflected in the mind in terms of feeling”[6]. However, it could be argued that the numinosity of an artwork is more often than not generated by the language that is used to frame an object or the historical narrative or mythos that has become attached to it over the passage of time. 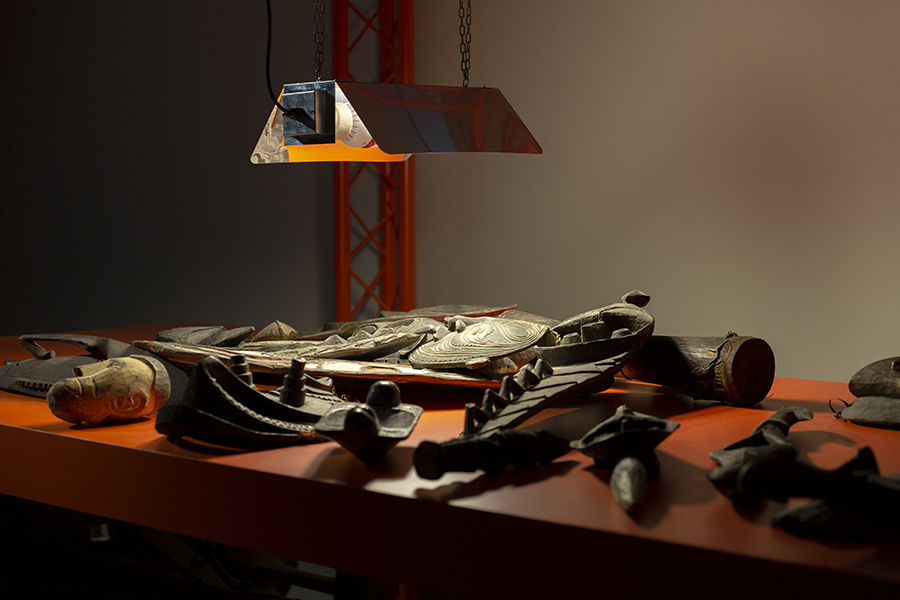 his is illustrated in the case of four similar artefacts, held in the collection of the British Museum [7]which date from the Aztec period and were acquired at different times between the 19th and early 20th century. Each is made of highly polished piece of solid obsidian cut into an oval form. These objects, known to the Aztecs as tezcatl were used for divination; to reconnect with the dead and communicate with unseen entities. The Aztecs associated these devices with the deity Tezcatlipoca (whose name translates from the Nahuatl language as smoking mirror) and who is always depicted with one of these mirrors somewhere upon or in his body. The most well-known of these mirrors is on permanent display in the Enlightenment Gallery of the museum and is alleged to be the mirror used by Elizabethan mathematician, astrologer and magician John Dee (1527-1608/9) for scrying (use of a reflective surface as a tool in divination) and communicating with celestial beings [8]. Although the other three obsidian mirrors in the collection are visually extremely similar to the one which is alleged to have belonged to Dr. Dee, they are not afforded the same level of attention. The online data for these items (usually held in storage) is extremely sparse; there is nothing to suggest that they are anything other than utilitarian objects, perhaps slightly unusual vanity mirrorsused for personal grooming. At present the information on the online inventory contains no information regarding the original intended purpose of these mysterious objects; there is no indication of their original function as magical fetishes. One can imagine that such magical tools might be easily misidentified as utensils with some sort of domestic or medical application.

In early 2017 The British Museum announced that a substantial portion of its two million artefacts currently kept at Blythe House, West London were to be relocated to a new purpose-built storage facility located in the Thames Valley science park. The relocation was prompted by plans to close the Edwardian building in 2023 and sell off the property. The new storage unit will mainly be used to house archaeological and ethnographic artefacts that are not on display, such as these obsidian mirrors. The unit will be constructed in close proximity to biotechnology and IT companies such company as BioInteractions Ltd. This company produces medical components designed to be implanted i inside the body; sensors intended for insertion into organs to augment perception and various other devices that make visible that which lies inside the human body and cannot be seen with the human eye.

There are numerous other examples that emphasise the extent to which the framing of a cultural object through language dictates its status and how it is interpreted. Any object can be inculcated with a mysterious character by a change in terminology or linguistic modification. This is illustrated by an oft-told art historical episode involving a Constantin Brancusi (1876-1957) sculpture entitled Bird in Space. In 1926 the sculpture (one of several by Brancusi inspired by a Romanian folk legend about a bird with supernatural powers) was being shipped from Paris to New York for inclusion in an exhibition organised by Marcel Duchamp (1887-1968). As the narrative goes, U.S. Customs Service imposed a tax on the sculpture on the grounds that it was not a work of art but an object with an industrial function. A court case that ensued and was resolved in Brancusi’s favour and is now considered one of the first in which legal avenues were pursued as a means of deeming an ‘abstract’ object as an artwork. Despite the fact that no physical or material changes had occurred, the value of the object was transformed as it mutated from utilitarian component into an artwork worthy of aesthetic appreciation, surrounded with a unique and powerful aura.

The concept of aura was of great interest to Walter Benjamin (1892-1940) who interrogated the idea throughout his career often reaching contradictory conclusions. In his seminal 1936 essay The Work of in Art in the Age of Mechanical Reproduction Benjamin proposed that the origins of all ‘authentic’ art lies in ritual. The ‘genetic’ memory of the art object’s original function as a tool in the service of magico-religious ceremonies results in it possessing a supernatural essence. In The Work of Art Benjamin stated the aura was connected to the uniqueness of the art object and that mechanical reproduction would result in its disappearance. Writing from a Marxist perspective, Benjamin believed that this elimination of the quasi-mystical ‘aura’ was -for the most part- positive because it would facilitate the redistribution of art from the elite to the masses. However even though Benjamin believed in the revolutionary possibilities of this process he also acknowledged that “the most perfect reproduction of a work of art is lacking in one element: its presence in time and space, its unique existence at the place where it happens to be [9].”

It would seem that there remains a widespread hunger in our technorational world for this ‘presence in time and space’ Benjamin refers to; a zone of enchantment in which the aura is all pervasive. Indeed, in the decades that have elapsed since Benjamin wrote his essay, the mass reproduction and circulation of images in the digital sphere has in fact served to magnify the eminence of the auratic artwork. Today, the surge of devotees traversing the globe on pilgrimages to museums to experience the presence of exceptional art objects exemplifies the continued power of the art object to inspire awe. This widespread societal phenomenon cannot be explained solely through the affordability of travel and the promotion of fine art as a tourist attraction. Secular society still possesses the innate desire for sacral environments delineated from mundane quotidian life and few environments provide this more effectively than the museum. For there remains an underlying need to affirm the presence of the miraculous and the sublime; a fundamental necessity for an ontological transcendental order.

[2] The Bendego meteorite is the biggest ever found on Brazilian soil. It was discovered in 1784 and had been on display at the museum since 1888.

[3] The Black Stone of Mecca, or Kaaba Stone, is a Muslim relic, which according to Islamic tradition dates back to the time of Adam and Eve.

[8] There is in fact some debate regarding the provenance of this object. While the mirror is certainly of Aztec origin there are questions around whether or not it actually did belong to Dr. Dee. The claim that it belonged to Dr. Dee stems solely from This assumption is primarily based on a claim by Horace Walpole, who received this item in 1771.